Ukraine says it shot down Iranian drone in Kharkiv

Photos posted online by Kyiv appear to confirm the Pentagon's claim that Iran has delivered armed drones to Russia for use in Ukraine. 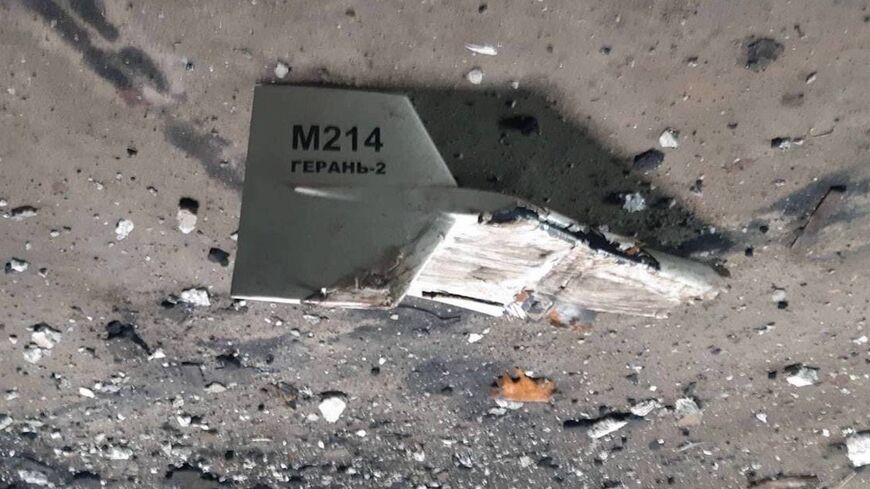 This image shared by the Ukrainian Defense Ministry Sept. 13, 2022, shows what the ministry identified as an Iranian Shahed-136 drone downed near Kupiansk, in the Kharkiv region of Ukraine. - Ukrainian Ministry of Defense

Ukraine’s military reported Tuesday that it had destroyed an Iranian drone used by Russian forces near Kharkiv.

The Ukrainian Defense Ministry published photos of what it said were the remnants of an Iran-made Shahed-136 kamikaze drone shot down near Kupiansk.

An intact tail fin of the drone bore the words M214 Giran-2, or “Geranium-2,” in Cyrillic lettering. The photos were first posted online by a Ukrainian explosive ordnance disposal officer.

Why it matters: The photos, which have not been independently verified, would be the first evidence of the use of Iranian drones in Russia’s war on Ukraine.

A Pentagon official told reporters late last month that Iranian drones had been delivered to Russia at the end of August and that many had proven faulty, though no evidence was provided for the claims.

Since Russia’s initial thrust toward Kyiv bogged down earlier this year, US defense officials have said that Russia has been depleting its stockpile of precision-guided missiles, leading it to rely on unguided or “dumb" munitions.

The New York Times reported earlier this month that the Kremlin also had turned to North Korea seeking artillery shells. The United States and its allies have funneled billions of dollars' worth of weaponry and munitions to the Ukrainian side, including Turkish-made Bayraktar TB2 drones, which were credited with a string of victories against Russian armored convoys early in the war.

The Shahed-136 drone is a one-way, delta-wing exploding UAV said to be able to travel up to 1,700 kilometers (1,056 miles), but it relies on a ground-control data link that the Iranian state media has said is limited to 200 kilometers (124 miles).

The 136 is believed to have been used in the 2019 attack on Saudi Aramco facilities at Abqaiq and Khurays that was claimed by Yemen’s Houthi rebels.

The proliferation of Iran’s sophisticated arsenal of armed drones in the Middle East has posed a vexing problem for regional states and the US military. Iran has armed proxy militias in Iraq, Syria, Yemen and elsewhere with the drones and, US officials say, encouraged attacks.

Know more: The United States sanctioned an Iranian firm it said was behind the delivery of Iranian drones to Russia.