The White House said it will consult with allies on next steps, including at the United Nations. 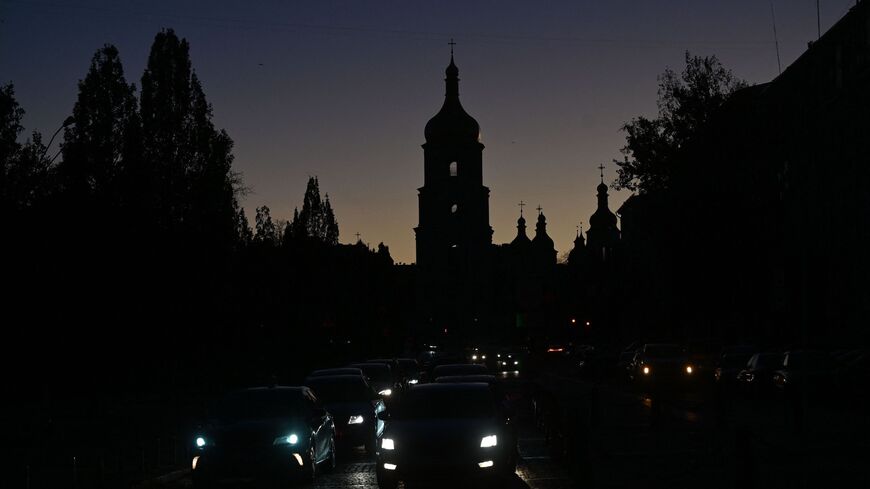 Vehicles drive along a street with the St. Sophia Cathedral silhouetted in the background as the city is plunged into near darkness following a military strike that partially brought down the power infrastructure, in Kyiv on Oct. 31, 2022. - SERGEI SUPINSKY/AFP via Getty Images

North Korea has begun covertly shipping artillery shells for Russia to use in Ukraine, the White House announced on Wednesday, in what US officials described as a sign of Moscow’s increasing reliance on outside support for its war effort.

White House National Security Council coordinator John Kirby said that Pyongyang is attempting to conceal the intent of the shipments “by funneling them through other countries in the Middle East and North Africa.”

“We’re not talking dozens here. It’s a significant number of artillery shells,” Kirby told reporters in Washington today, noting that American officials do not assess that the supplies will shift the direction of the war.

American officials continue to monitor the situation to determine if and when the shipments are received, Kirby added, but he declined to specify the transportation method and the identities of the stopover countries, which he implied were known to US intelligence. US officials have not publicized evidence for the claim.

A spokesperson for the US National Security Council did not immediately return Al-Monitor’s request for further comment.

Why it matters: American officials have been predicting for months that Russia’s depletion of precision-guided weapons in Ukraine would lead its military to rely increasingly on so-called “dumb” munitions, but reports that Moscow has been seeking to source simple artillery shells from abroad point to an even deeper sustainment crisis.

“It’s a sign not only of the degree to which North Korea is willing to bolster Russia, but also of Russia’s own defense article shortages and need,” Kirby said today.

“Export controls and sanctions have had an effect on [President Vladimir] Putin’s defense industrial base, forcing him to look for outside sources of ammunition and capabilities,” Kirby said.

State Department deputy spokesperson Vedant Patel stated last month that Russia was “in the process of purchasing millions of rockets and artillery shells from North Korea for use in Ukraine.” The White House later described the arrangement as a “potential purchase.”

Pyongyang slammed the allegation shortly thereafter, saying it never exported weapons or ammunition to Russia and did not plan to do so. The Kremlin also denied the charge, which would violate the United Nations’ arms embargo on North Korea.

Since Russia’s unilateral invasion of Ukraine in February, US and Western allies have assertively declassified and publicized key intelligence as part of a strategy to publicly embarrass the Kremlin and reveal its war plans ahead of time.

Over the summer, White House and Pentagon officials revealed intelligence indicating Russia’s military was seeking to obtain armed kamikaze drones from Iran for use in Ukraine.

Russian remote pilots assisted by Iranian military advisers in Crimea launched dozens of Shahed-136s and other Iranian drones against civilian infrastructure in Kyiv and other cities last month, US and Ukrainian officials said.

The attacks drew swift condemnation from the United States and its Western allies, who have rallied to provide Ukraine with tens of billions of dollars worth of heavy armaments to repel Russia’s invasion. Russia and Iran have both denied the presence of Iranian drones in Ukraine.

Kirby has said US officials expect Iran to send additional drones to Russia and that they remain concerned that Iran could send surface-to-surface ballistic missiles for use against Ukraine, though he assured reporters today that there are “no indications that there’s been a transfer of surface-to-surface missiles from Iran to Russia.”

What’s next: The Biden administration will “consult allies and partners, particularly at the UN, on additional accountability measures,” Kirby said. “We have made no decisions about that,” he added.

UN member states are permitted to halt and inspect shipments suspected of containing banned North Korean armaments within their territories, according to UN Security Council Resolution 1718 of 2006.

In 2017, the United States quietly informed Egyptian counterparts via diplomatic channels about a Cambodian-flagged freighter approaching the Suez Canal. The ship contained concealed cargo of more than 30,000 rocket-propelled grenades. After their seizure by Egyptian customs officials, a UN investigation concluded the weapons had been destined for the Egyptian military.

Pyongyang has also been tied to Syria’s chemical weapons program. A 2018 UN investigation implicated its government in shipping embargoed ballistic missile components to Syria and found that North Korean technicians had worked in known chemical and munitions factories inside the country.

Defense Secretary Lloyd Austin is set to meet with his South Korean counterpart Lee Jong-Sup at the Pentagon today.