The Pentagon is actively consulting with allies to provide air defense systems to Ukraine to defend against Russia’s bombardments using Iranian drones. 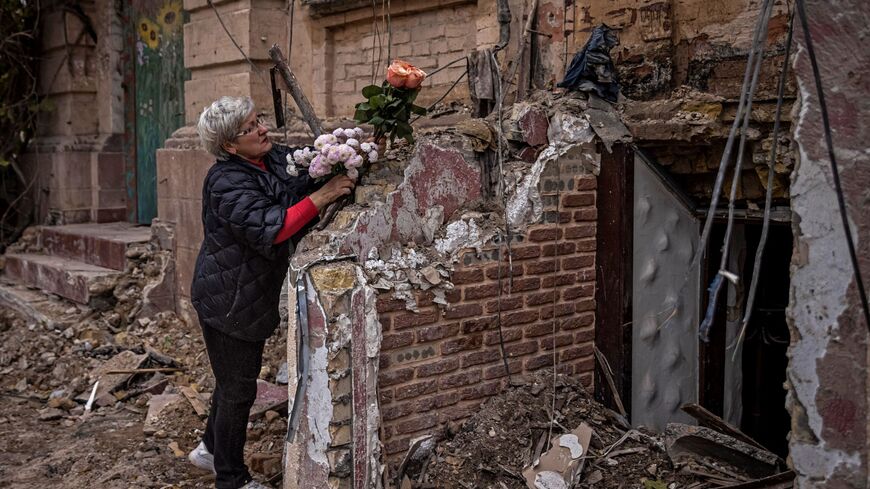 A woman arranges flowers outside a house where a couple was killed in a Russian drone strike two days beforehand on Oct. 19, 2022 in Kyiv, Ukraine. - Ed Ram/Getty Images

“Today we can confirm that Russian military personnel that are based in Crimea have been piloting Iranian UAVs, using them to conduct strikes across Ukraine, including strikes against Kyiv in recent days,” the White House's National Security Council coordinator John Kirby told reporters today.

“We assess that Iranian military personnel were on the ground in Crimea and assisted Russia in these operations,” Kirby said.

“Furthermore,” he added, “In light of Russia’s ongoing supply shortages, we are concerned that Russia may also seek to acquire advanced conventional weapons from Iran, such as surface-to-surface missiles, that will almost certainly be used to support the war against Ukraine.”

The White House’s acknowledgement added detail and appeared to corroborate reporting by the New York Times, The Washington Post and Reuters this week.

Kirby said today that US officials believe Russian military personnel piloted the drones with the aid of “a relatively small number” of Iranian technical advisers and military trainers based in Crimea, a peninsula in Ukraine’s far east which Russia annexed unilaterally in 2014.

While the US has not identified the Iranian personnel in Ukraine as belonging to any particular outfit, a statement by the UK government said they were members of the Islamic Revolutionary Guard Corps (IRGC) in the country.

Tehran and Moscow have denied the presence of Iranian drones in Ukraine, despite what the US and Western allies say is an abundance of evidence to the contrary.

A spokesperson for Iran's mission to the UN rejected the Biden administration’s comments today in a written statement to Al-Monitor, saying they were “based on political goals.”

“We know that these drones are from Iran,” Ryder told reporters at the Pentagon today. “It’s obvious that they’re lying.”

The Washington Post reported this morning that US personnel had examined wreckage recovered from the drone strikes in Ukraine earlier this week. The Biden administration has not publicly confirmed that report.

“There is extensive proof of their use by Russia against both military and civilian targets there yet,” Kirby told journalists today, adding that he expects Russia to receive more drones from Iran in the future.

“The fact is this: Tehran is now directly engaged on the ground,” he continued, adding that Washington would “pursue all means to expose, deter and confront Iran’s provision of these munitions against the Ukrainian people,” and would seek to enact further sanctions against both Iran and Russia. “We’re going to make it harder for Iran to sell these weapons to Russia, we’re going to help the Ukrainians have what they need to defend themselves against these threats.”

The White House first declassified intelligence in July indicating that Iran was planning to transfer hundreds of drones to Russia for use in Ukraine.

Pentagon officials have said the Russian military’s failure to conduct regime change in Kyiv in the first months of its campaign led it to deplete its stockpiles of precision-guided munitions, turning to countries like Iran and North Korea for resupply.

During a closed-door session at the UN Security Council yesterday, the US, UK and France backed a Ukrainian motion that Iran’s provision of military drones to Russia for use in the war violated Resolution 2231, which enshrined the 2015 nuclear deal between world powers and Iran.

The resolution placed an arms embargo on Tehran which expired in 2020, but officials maintain it further forbids Iran to import or export certain advanced weaponry until 2023.

Pentagon officials are actively consulting with US allies to source air defense systems to help Ukraine defend its skies, officials said today. The US has already provided Ukraine with counter-drone weaponry, including VAMPIRE counter-drone launchers.

A senior US defense official speaking to reporters at the Pentagon on Monday accused Russia of seeking “to instill terror and trying to create panic” with its strikes on population centers in Ukraine earlier this week.

“If you look back at the history of air power campaigns, conducting these types of campaigns, trying to strike at the psychological aspect. … It doesn’t work. If anything, you’ve seen that the Ukrainians have increased their resolve,” the official said.

“We don't believe it's going to change the course of the war,” Kirby said today.