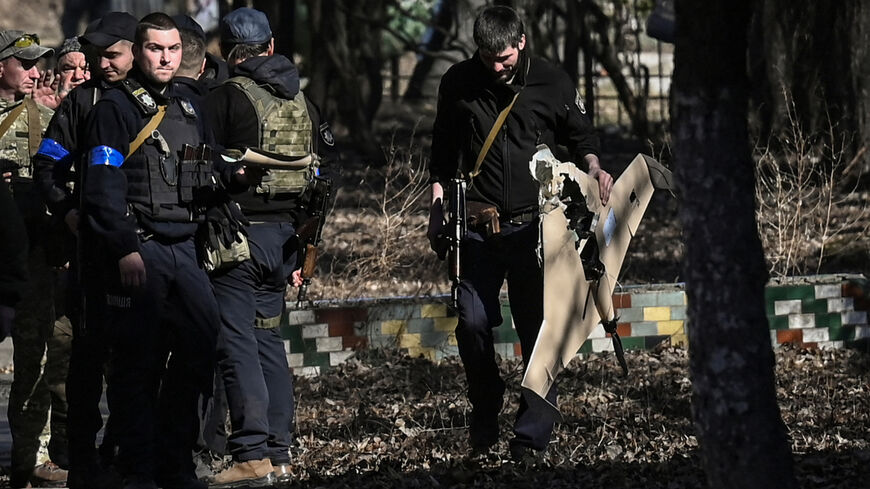 A Ukrainian serviceman carries a downed Russian drone in the area of a research institute, part of Ukraine's National Academy of Science, after a strike, in northwestern Kyiv, on March 22, 2022. - ARIS MESSINIS/AFP via Getty Images

The use of Iranian unmanned aerial vehicles (UAVs) by Russian forces in Ukraine has ceased to be taboo in Russian society.

Officials continue to call news about Iranian drone deliveries to Russia "artificially promoted" "fakes," but the Russian press writes about it quite freely and without hesitation, despite current laws that prohibit disseminating data about the army that contradict official ones.

Moreover, even the Russian Ministry of Defense — an agency whose representatives call any major retreat a "regrouping" without blinking an eye — has begun to acknowledge problems in equipping the troops with nationally developed drones. Thus, at the end of September, Col. Igor Ischuk, a representative of the Defense Ministry, stated directly that most Russian UAVs do not meet the tactical and technical requirements of the agency, which as a result "has to go to simplification, to additional approvals, to acceptance of drones for pilot operation."

However, even such statements do not mean that in the near future Moscow or Tehran will admit the obvious and thereby confirm rumors of a growing military-technical partnership.

First, due to the length of the front line, the massive use of artillery by both sides and the Ukrainians' use of air defense assets in ambush mode, any drones are expendable material. Russia still has not acknowledged the use of Iskander operational-tactical missiles against Georgia in 2008, despite ample proof. Therefore, it is rather naive to believe that photos and videos with remnants of the Iranian MD550 engine from the Shahed-136 kamikaze drones will convince the Kremlin to make any public acknowledgment.

Second, even the Chinese civilian DJI quadcopters purchased en masse for Russian troops do not immediately find themselves on the front lines, because it takes time to hack to disable the transponder that gives out the operator's location. In the case of the Iranian UAVs, the time lag between receipt of the shipment and delivery to the frontline is used for repainting, namely to apply Russian markings and flight numbers. Incidentally, this repainting trick was first used by Moscow when moving MiG-29 fighter jets to Libya via Iran and Syria to support Khalifa Hifter.

Third, in May 2022, in order to promote its drone diplomacy, Iran opened a factory in Dushanbe to produce Ababil-2 UAVs. Hypothetically, given Tajikistan's membership in the Russian integration association of the CSTO, this makes it even easier to dissolve Iranian drones in the Russian fleet of unmanned aerial vehicles. All the more so because the Ababil-2 reconnaissance UAVs, based on a number of videos, can already be used by Russian troops in Ukraine.

Nevertheless, the saturation of Russian forces with Iranian drones does not mean that Russia has developed a clear concept for using these UAVs in combination with its own. Judging by the fact that Russian military transport aviation has only recently joined flights to Iran, it is possible that the number and quantity of UAVs purchased are being adjusted as they are used in the Ukrainian sub-theater.

In addition, the preparation of Russian drone operators took place at an accelerated pace in Iran, and the final period of training in the use of Shahed-136 (renamed Geran-2 or Geranium-2 by Russia) appears to be taking place already in Ukraine. For example, Russian experts attribute the loss of the Iranian Mohajer-6 drone, which can perform combat missions and act as a navigator for Shahed-136 loitering munitions, to pilot error due to lack of experience in their use.

According to media reports, the Russian military is using Iranian UAVs to strike targets both on the line of contact and deep inside Ukrainian territory at a range of several dozens of kilometers. However, according to Russian servicemen themselves with whom Al-Monitor spoke, expectations that the Shahed-136 kamikaze drones would be used en masse against mobile Ukrainian artillery brigades with American HIMARS artillery missile systems and M777 howitzers and French CAESARs have not yet materialized.

Theoretically, if Shahed-136 did not find a suitable target in the search area with the help of onboard electro-optics, it is sent to attack a stationary target with known coordinates, experts say. However, the shortage of precision-guided weapons, restrictions on the operation of attack aircraft in the operational depths of Ukraine's defense, and problems with the quality and quantity of technical reconnaissance equipment force the Russian military to use Iranian UAVs mainly as a replacement for cruise and tactical missiles for strikes against stationary targets that do not require reconnaissance check. In particular, it is known that Shahed-136 loitering munitions together with Russian Lancet-3 kamikaze drones were used to hit an air defense command post and a fuel storage facility in Ochakiv and the headquarters of the operational command South in Odessa.

Overall, the Ukrainian war not only highlighted numerous problems within the Russian army, which at the time of the invasion of Ukraine relied heavily on the experience of the "parade" campaign in Syria, but it also moved Russian generals and officers in relations with Iranian ones from the category of instructors to trainees. Due to the huge and, most importantly, unplanned consumption of ammunition, the Russian military is also interested in replenishing its stockpiles with shells and bullets of various calibers, which are serially produced at Iranian factories. This seemingly insignificant change at the grassroots level of military cooperation actually reflects a breakdown in the previous system of relations between Moscow and Tehran. Previously, it was the Kremlin that decided how deeply to strengthen cooperation with the Iranian clerical leadership in order not to upset the balance in relations with the West and Israel. Now, given the dire consequences of the failed blitzkrieg in Ukraine, Moscow is essentially in a position where Tehran can already decide what it wants from Russia.

Representatives of the administration of former President Hassan Rouhani expressed a desire to have Russian Su-30 fighters, while the officials working under current President Ebrahim Raisi are in favor of buying more modern Su-35 fighters. In previous years, Moscow had shown little willingness to supply Iran with such sophisticated military hardware and apparently made this process conditional on the outcome of the negotiations on the nuclear deal. Today, with relations with the West in an acute crisis and negotiations on the nuclear deal revival essentially deadlocked, attitudes toward Iranian supplies are being reconsidered. Therefore, it is likely that in the future Iran may indeed receive Russian Su-35 fighter jets, which have not been delivered to Egypt.

At the same time, it is possible that Russia will try to rectify its position and present its current dependence on Iran as a temporary necessity. For instance, Moscow could offer Tehran joint programs to modernize existing drone models, highlighting such shortcomings as low speed, visual and acoustic visibility, which, logically, should be corrected. But here, too, the Kremlin is capable of falling into a trap. If Russian imports of Iranian UAVs do not bother Saudi Arabia, the UAE or Israel much, then the joint Russian-Iranian modernization of drones, based on the experience of a large-scale rather than local conflict, will be perceived extremely painfully, even taking into account the limited industrial capabilities of Russian enterprises specializing in UAV production.