Unknown to most Israeli voters until just a few weeks ago, social media star Hadar Muchtar becomes a political figure to reckon with. 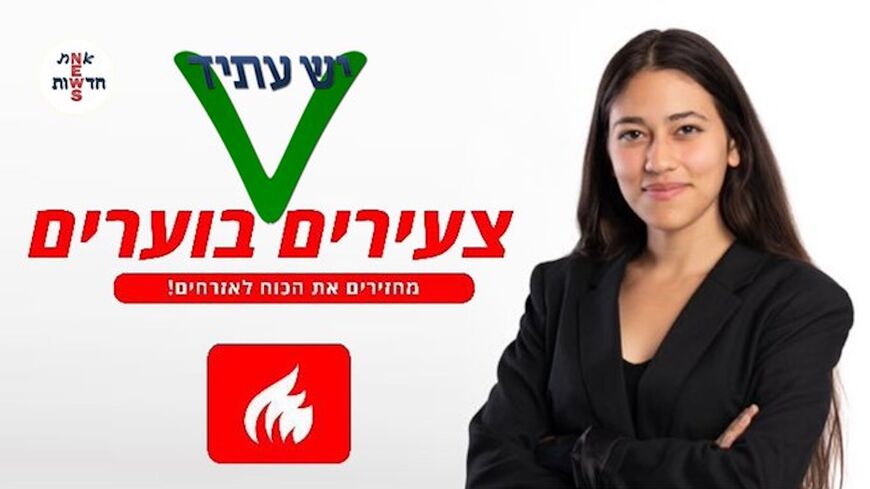 One of the most interesting phenomena of Israel’s 2022 election is a 20-year-old woman named Hadar Muchtar. A complete unknown as recently as two months ago, Muchtar suddenly emerged as a sensation because of her social media presence, especially on TikTok.

Just a few weeks ago, Muchtar formed a new party named Tze’irim Bo’arim, or Youth on Fire, and announced that she plans on running the party in the upcoming election.

There is, however, a little glitch. Because of her age, she, herself, will not be able to run. According to Israeli law, the minimum age to run for Knesset is 21. Because of this, Muchtar announced that while she will not run personally, she does see herself as a contender for the position of Minister of Housing. Her list itself will only include people ages 21 or older.

Muchtar releases her online videos at a dizzying speed. In most of them, she appears with a megaphone, firing off slogans against the rising cost of living and attacking professional politicians, claiming that they have abandoned the young and care only for themselves. She delivers her messages in the language of TikTok too. Her statements are terse, intriguing, hard-hitting and refreshing. The subtext is clear too: We are the future, so give us the power to instigate change.

The truth is that the Muchtar phenomenon is not completely original. Bright new stars have been popping up in Israel politics in almost every election for years now. What sets Muchtar apart is that never has anyone so young become so well-known so quickly. Were it not for the social media revolution, a phenomenon like Muchtar could never have emerged in the first place.

Then something interesting happened. Just last week, a major news channel decided to test Muchtar’s strength by including her in their polling of the other, established parties. Much to everyone’s surprise, she is already running almost neck-to-neck with Zionist Spirit party leader Interior Minister Ayelet Shaked.

While in the poll neither of them passes the electoral threshold, the very comparison of the two women and the questions that it raises are screaming for answers. How did a young woman, who should be little more than a curiosity, succeed in penetrating the very heart of Israeli politics?

Her breakthrough in this recent poll generated all sorts of rumors. Social media was suddenly inundated with questions and speculations about her. Who is behind her? Did she alter or edit any of the known details of her bio? Are her parents millionaires? Is she a proxy of Prime Minister Yair Lapid, or could opposition leader Benjamin Netanyahu actually be behind her?

Suddenly, people started to realize that no one really knows anything about this young woman’s past except for what appears online. No one even knows who appears on the Youth on Fire Knesset list, since the existence of that list was only revealed recently during her campaign.

Muchtar addressed all these questions in an effective manner, using the medium into which she was born and that she now dominates. She released a TikTok video, shot in a car, to relay a sense of dynamism, like so many of her other videos.

A strange incident that happened this week managed to embarrass her. Muchtar showed up for an interview on Channel 14 and spoke about the cost of living. Suddenly the interviewer surprised by her saying that she was spotted coming to the interview in a Mercedes. But even this did not throw Muchtar off her game. She answered without skipping a beat that a friend drove her there and that she actually uses public transportation.

Even while she is gaining more and more exposure in traditional media outlets, Muchtar continues to create more digital content in which she contrasts the steep prices of basic products in Israel with the cost of the same items in Germany, where she lived briefly as an exchange student.

When asked about her ideological background, she answered, “I don’t believe in left or right. It is all brainwashing by the ruling elites.” When asked about her personal ideology, she said, “My ideology is that all matters of synagogue and state in general, and conversion therapy [by religious extremists] in particular, as well as all other civil issues, should be resolved in a referendum.”

The main motif of her campaign remains her attacks against the political old guard. She refused to join forces with former Minister Eli Avidar, who formed his own party, declaring proudly that she even blocked him on WhatsApp.

Last month, Muchtar showed up to a meeting of the Knesset’s Education Committee and caused such a commotion that she had to be removed from the chamber. She had been shouting at the members of Knesset in attendance that they only care about themselves. “We pay your salaries!” she kept repeating to the taunts of the Knesset members themselves. Some of them ridiculed her by saying that she only came to the committee to get “Likes” on TikTok.

But that’s exactly what Muchtar wanted. The whole incident was caught on camera and became an internet video. When it comes to young people in Israel, there is no better election commercial. Here was a young girl who accuses older, established politicians of caring only about themselves. Even the best ad companies couldn’t create content so contemporary and hard-hitting.

Israel will be holding new elections less than two months from now. It is hard to believe that in that short time, the Tze’irim Bo’arim party will gain the momentum it needs to pass the electoral threshold. Still, even in the likely scenario that the party does not get elected to the Knesset, it is clear to everyone that something happened. It is even possible that until Israel’s next election — and elections happen frequently here — she will mature and manage to get herself elected after all.

This is certainly a warning shot for the professional political class. The rules are changing even more quickly than they imagined. Israel is a relatively young society, and in just a year or two, the young people who first met Muchtar on TikTok will be old enough to vote. It is even possible that some new personalities will pop up and join forces with her. If there is anything to learn from all this, it is that Muchtar managed to crack something, and that something can no longer be ignored.