Ahead of the Nov. 1 elections, most Israeli-Arab voters do not believe that their representatives in the Knesset are capable of bringing real change. 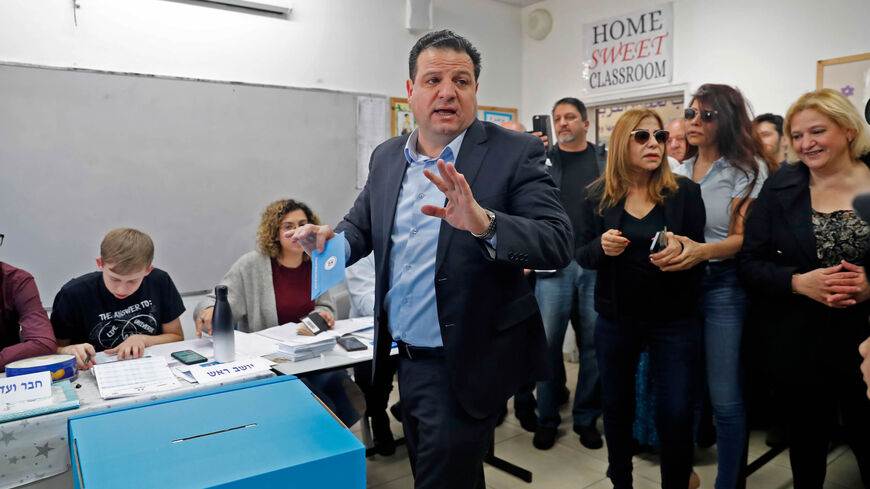 Israel's head of the mainly Arab Joint List Ayman Odeh casts his ballot accompanied by his family during the parliamentary election at a polling station, Haifa, Israel, March 2, 2020. - Ahmad Gharabli/AFP via Getty Images

With just one week left before the final deadline Sept. 15 to submit lists of candidates for Israel’s November election, many polls show general apathy among the Arab population toward anything to do with the election.

Pollsters now anticipate unprecedented new lows in election participation and voting in the Arab sector. Voting rates in the Arab society are now expected to be slightly less than 40%, as compared to 44.6% in the last election, and as high as 64% in the March 2020 election with all the components of the Arab Joint List running as a unified bloc.

While it is still too early to determine the actual outcome of the impending vote and the rate of Arab participation, it is hard to ignore the fact that apathy and distrust in the political system nationwide are gaining momentum within the Arab public. An increasing number of Arab citizens are losing faith in the notion that they can play an integral and influential role in the Israeli political system.

Of course, there are all kinds of reasons to explain what caused Arab citizens to lose trust in the political system as a whole and in their Arab representatives in particular. Nevertheless, it is increasingly common in Arab society — and especially among the youth — to hear comments like, “It’s the same people and the same faces in every election,” "Aren’t there any young Arabs?” or “Isn’t it time to infuse fresh new blood into politics?”

This seems to indicate a feeling of disgust among the Arab public — and especially among the younger generation — at the existing parties’ failure to include new faces in their lists.

This is especially true of the Arab Joint List. While the Ra’am party elected 41-year-old Walid Alhuashla, the party’s Knesset faction coordinator, to the No. 3 spot on its list, the three factions that make up the Joint List — Hadash, Balad and Ta’al — haven’t even announced that they will be running together.

Assuming that they overcome their differences and agree to run together again, they are expected to win 5-6 seats according to the polls. The heads of these three factions will surely not give up their spots on the Knesset list. Hence, the same people who already served in the Knesset will probably return to their seats. In other words, the chances are slim at best that there will be any young new faces in the Joint List.

Safaa Jabareen from the town of Umm al-Fahm is considering not voting this time. She told Al-Monitor, “I think that the general feeling within the Arab community is one of frustration. Why? How long can we keep watching [Joint List senior Ahmad] Tibi? He’s been there for over two decades already. There are no new faces. They are not pouring fresh new blood into the parties. Their agenda and all their speeches feature all the same people and all the same faces. It feels more like they are partners in some private business rather than politicians who are to represent Arab citizens. But in the end, it can’t be a private membership club forever.”

Arab voters might have given up on their long serving representatives bringing a change, but that does not mean they have stopped longing for it, or that they have given up altogether on the desire to become an integral part of Israeli politics.

These figures highlight the fact that the Arab sector wants to participate in and play an influential role in Israeli politics, but that it does not believe they can achieve this with the current list of candidates. The answer, they would say, is to bring in new names.

One of the major issues troubling Arab voters is the sharp increase in violence in recent years. On Sept. 5, well-known journalist Nidal Aghbariya was shot and killed. The day after, Manar Hajaj and her daughter were shot and killed in the city of Lod; the other daughter managed to escape the shooting.

The founder and director of Ad’ar - The Forum for Professionals to Fight the Murder of Women, Manal Shalabi, told Al-Monitor, “I would expect all the Arab parties to give young people in their cadre realistic spots on their Knesset lists. There are a lot of talented young people who could instigate change within the party and within Israeli politics as a whole.”

She said, “The challenge facing the Arab parties today is the low voter rate in the Arab sector. One of the reasons for that is the lack of new people, especially young people and women, who can represent the interests of Arab society. The problem is that all the parties chose the same people, who have spent years in politics. Take Ta’al, for instance; Osama Sa’adi resigned, and the person remaining has been in the Knesset for over two decades already.”

Khalid Ghanayim, from the town of Sakhnin and a former member of the Ben Gurion University Student Council, also calls for an injection of new faces in the Arab parties. “Any renewal of the parties will involve the youthful energy of the young generation in the Arab society, regardless of whether these are young people who emerged from the various institutions and associations or the party organizations themselves. Instead, the Arab parties maintained a long-standing hierarchical structure, which causes many young people to disavow political and party activism and even voting. They don’t feel as if they are part of the existing dialogue taking place today in most of the Arab parties,” he told Al-Monitor.