Contrary to last year, neither the Arab Joint List nor Mansour Abbas' Raam party recommended to the president any candidate for the formation of the next government. 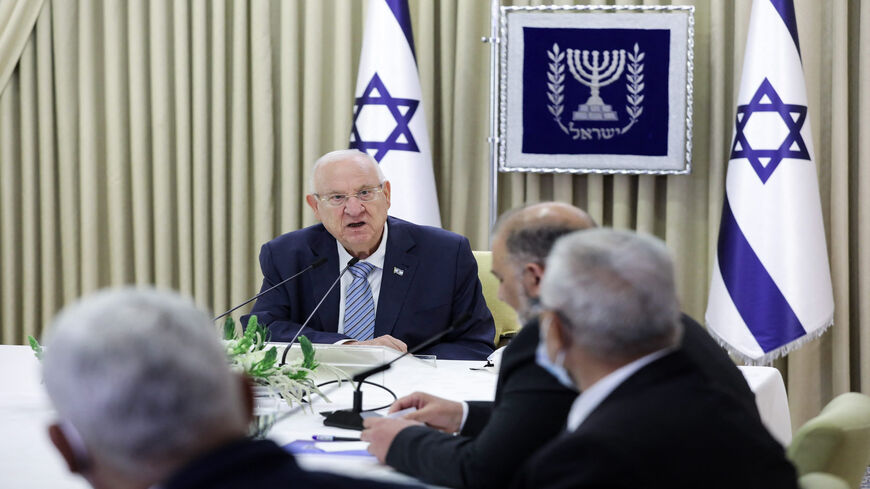 Israeli President Reuven Rivlin (C) speaks with Mansour Abbas, leader of the Arab Joint List, during consultations on who might form the next coalition government, at the president's residence in Jerusalem, April 5, 2021. - Abir Sultan/POOL/AFP via Getty Images

President Reuven Rivlin tasked today, April 6, Prime Minister Benjamin Netanyahu with the mission of composing the next government. On April 5, Netanyahu received a larger endorsement for the mission compared with Yesh Atid’s Yair Lapid — 52 Knesset members supported his candidacy versus 45 for Lapid. New Hope and its leader Gideon Saar declined to recommend to the president a candidate. The two Arab parties — Raam and the Joint List — took the same course.

Apparently, Saar’s refusal to recommend either candidate pushed the Arab legislators to refrain from making their own recommendation. With Yamina recommending its own leader Naftali Bennett and with Saar recommending no one, Raam and the Arab Joint List could no longer tip the balance.

The Joint List is composed of three factions. Hadash and Balad announced early on the morning of April 5 that they would not recommend a candidate. But the third faction, Ta’al, took its time. Its head Ahmad Tibi chose not to reveal his decision to the public at the same time as his colleagues. He preferred to wait and see what Saar and his New Hope party decided to do. After Saar made his decision, Tibi made his own. Evidently, he was no longer able to tip the scales in Lapid’s favor. Saar’s decision also deposed Raam party Chairman Mansour Abbas from his role as “kingmaker.”

The final outcome of this was that the entire Joint List and Raam chose not to recommend anyone. This was the exact opposite of what happened last year, when the 15 members of the Joint List decided to recommend Blue and White party leader Benny Gantz to form the government.

Reflecting on the discussion that took place last year in the Arab community — over whom to recommend to the president — and comparing that to what happened yesterday, it is hard to believe that we are talking about the same Arab public and electorate.

If, last year, the Arab electorate practically forced its representatives on the Joint List slate to recommend Gantz, this year there was greater apathy and indifference to what happened in the president’s residence. The reason for this goes back to Gantz’s decision to join the Netanyahu coalition last year, even if it meant turning his back on the Arab electorate that ensured he would be asked by the president to form the next government.

This was also the precise point that Abbas played up in his efforts to turn Raam into the largest party in the Arab society. He said repeatedly, “I am not in anyone’s pocket. I am neither left nor right.” He was arguing that his former colleagues in the Joint List were already in the pocket of the candidate opposed to Netanyahu, hinting that such a pre-negotiation position could be detrimental to the Arab parties in their negotiations to form the next government.

In retrospect, the gamble paid off for Abbas and Raam. Raam managed to pass the Knesset threshold and garnered four Knesset seats. The Arab Joint List (the three factions together) garnered six.

Clearly, Raam was responsible for a major turnabout in the Arab society. Nevertheless, it is still important to wait and see how the formation of the next government develops. If a government headed by Bennett is formed, with the support of certain parts of the Joint List, or even in their absence, it can impact any influence Raam would have on such a government. The same is true of the opposite scenario, if Netanyahu forms a government with the support of an Arab party.

A year ago, no one could have imagined this second scenario. Netanyahu, who once rejected any coalition partnership with the Arab parties out of hand, suddenly wants to form a government with Raam, the party of the Islamic Movement.

And if you think that this shift is only relevant to Netanyahu and his party — one might even say a shift brought about because of a political crisis — a poll conducted by the Israel Democracy Institute found that 48% of Israelis would support a government with the outside support of the Arab parties. A breakdown of this number finds that such a government would have widespread support from the left (79%) and considerable support from the center (55%), and as much as 35% of the right would also support such a move. It is a sharp difference to the 10% on the right who supported it in February 2020. It is, undoubtedly, a dramatic shift.

How is the Arab public reacting to the Arab parties’ decision not to recommend any candidate to the president? Fida Nara, a member of the Hadash secretariat, told Al-Monitor, “Last year the Joint List — with 15 seats — recommended Gantz, but he lacked the courage to form a government with the support of the Arab parties. The situation has only deteriorated since then. Today, the 10 Arab Knesset members didn’t recommend anyone. We are opposed to the right in general, and not just Netanyahu. Lapid has already announced that he will form a government with Bennett. The political situation is complicated. It looks like there will be a fifth round of elections. The problem is not just Netanyahu the person, but the policies he represents too. It is necessary to change paths and not just personalities.”

Sadik Shakour, an educator from the village of Kisra in the north, told Al-Monitor, “The Arab parties didn’t recommend any candidate. This is the result of the sense of alienation that has accumulated among the Arab population over the last few years. I agree with the decision. In my opinion, it will serve their interests in the future.”

All that can really be said is that anyone who visited Arab towns and villages last year and then came back to see how it is doing today would be hard-pressed to believe that these are the very same people, the same voters who insisted only last year that their representatives name a candidate to form the next government.