After years of being sidelined, Arab politicians are being courted by parties from both the right and the left as they try to convince them to join a coalition. 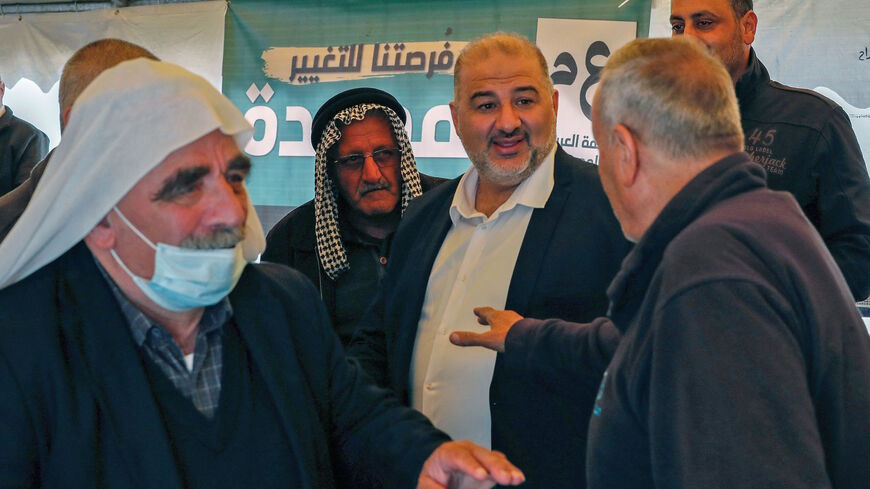 Mansour Abbas (C), head of Israel's conservative Islamic Raam Party, speaks to supporters during a political gathering to congratulate him on the electoral victory in the northern Israeli village of Maghar on March 26, 2021. - AHMAD GHARABLI/AFP via Getty Images

The attempt to form a government by the bloc opposed to Prime Minister Benjamin Netanyahu has become a Twitter war between Yesh Atid leader Yair Lapid and New Hope Chairman Gideon Saar. President Reuven Rivlin is expected to start consultations with heads of the different parties on April 5 to decide who will be tasked with composing the next government. Evidently, the two men will have to make up their minds by then. The same is true for Yamina leader Naftali Bennett.

But while the struggle continues over who will lead the "change camp," as it is now dubbed, other elements could become decisive for the formation of the next coalition. Head of the Islamic Raam Party Mansour Abbas is expected to make a public address on either April 1 or April 2. Channel 12 reported that Abbas will call for reconciliation, for the Arab public to reach out to the Jewish one, and for seizing the opportunity for coalition cooperation. What would this mean politically? Will Abbas declare joining one of the two camps? That is still unclear. Abbas is playing his cards close to his chest.

What is clear is that Abbas seems more and more like the election’s big winner, although his party received only four mandates. Abbas is the one who could determine the identity of the next government of Israel, and it seems that the continuation of Netanyahu’s rule depends on him.

In his efforts to win over Arab electorate support ahead of the March 23 elections, Netanyahu adopted the moniker “Abu Yair.” He was hoping that a rapprochement on his part would prevent the mobilization of Arab voters against him, which is what happened in the last election. His move turned out successful, as the turnout in the Arab public at the polling stations was less than 50%.

In the months leading up to the 2020 election, Netanyahu campaigned with the slogan “Without the Joint List, Gantz can’t form a government.” The Joint List is a unified slate of predominantly Arab parties. A year after and an election round later, Netanyahu can’t form a government without Raam and Abbas. This situation has turned Abbas into the man most sought after by both sides in Israeli politics.

On March 27, Likud Knesset member Ayoub Kara visited Abbas at his home village, seemingly to tip the scale in favor of the Netanyahu bloc. Kara later wrote on Facebook regarding the meeting, “We should embrace the pragmatic element of Mansour and not hurt him with empty and damaging declarations.” Abbas, on his part, clarified the next day in an interview on Radio Nas that he was not negotiating with Kara, but hinted he might dialogue with others in the Likud party. So was he indeed hinting at other Likud seniors? Some analysts estimated he was referring to Knesset speaker Yariv Levin of the Likud. Other publications claim that ultra-Orthodox Shas Party leader Aryeh Deri is now in discrete contact with Abbas to convince him to join Netanyahu’s camp.

And if that’s not enough, on March 28 Lapid met in his home in Tel Aviv with Abbas in order to convince him to join the change camp, a meeting that reportedly ended without a decision. They agreed to continue to talk. Abbas continued his journey yesterday and met with Defense Minister and Blue and White party head Benny Gantz and Labor party leader Merav Michaeli, who attempted to convince him to form a government led by the change camp.

But Abbas is not the only Arab Knesset member being courted. On April 1, a meeting is to be held with the leaders of the Joint List and Lapid. In order to form a majority coalition, Lapid would need their direct or indirect support. For the moment, it is not clear whether Knesset member Sami Abu Shahada, who heads the Balad faction within the Joint List, would join party chair Ayman Odeh and party senior Ahmad Tibi at the meeting. Recent reports claim Balad does not intend to take part in the game of recommending to the president a candidate to form a government.

Ahead of tomorrow’s meeting with Lapid, Tibi told Al-Monitor, “We haven’t decided regarding our recommendation. It’s important to us to bring the demands of the Arab sector front and center at every meeting. We’ll discuss and decide within the party.”

Still, regardless of the meetings Abbas held and will hold this week with leaders of the change camp, some of his associates conjure he might actually prefer Netanyahu’s side. This, despite all of the bad blood between Netanyahu and Arab citizens and the fact that far-right politicians Bezalel Smotrich and Itamar Ben Gvir are part of Netanyahu’s bloc.

What could be his reasons? Abbas might estimate that the Israeli right is more powerful than the left and that the chances of its right-wing camp holding on to power in the coming years are higher. He might also estimate chances of realizing concrete, short-term goals inside a Netanyahu-led coalition are higher than with the opposite camp. We are talking about budgets to fight crime in Arab towns and villages, nullifying the Kaminitz Law on construction offenses and more. By achieving these goals rapidly, Raam could show its electorate that it is them, not the Joint List, who are capable of bringing tangible results.

Taybeh Mayor Shuaa Mansour, who mediated between Lapid and Abbas, told Al-Monitor, “Raam can tip the scale, and it should use this for the benefit of the Arab public. Raam would never go with Ben Gvir and Smotrich. Whoever calls for destroying the Al-Aqsa Mosque permits the murder of Arabs out of racist motivations, and calls for transfer are deplorable — and the Arab parties, including Raam, would never support such a government. Netanyahu’s chances of forming a government are growing less likely as long as the equation depends on the extreme right.”