The eastern-based House of Representatives has launched an offensive on the judiciary that threatens to politicize one of the sectors of the country that had been able to remain to some extent outside the national rifts and that could turn the conflict very legal in nature. 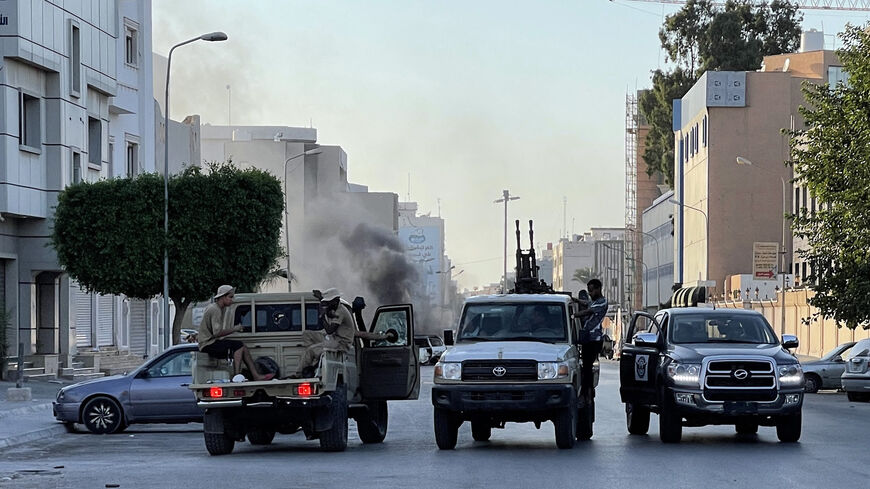 Fighters loyal to the Government of National Unity are pictured in a street in Tripoli, following clashes between rival Libyan groups, Libya, Aug. 27, 2022. - Mahmud Turkia/AFP via Getty Images

Effectively opening a new front in Libya’s deepening rift, a new, contested president of the country’s highest judicial authority was sworn in Sept. 18 before the powerful speaker of the eastern-based House of Representatives, Aguila Saleh, in a move that threatens to further entrench the conflict by politicizing yet another key institution.

The ceremony came after Libya’s parliament approved a week earlier the appointment of Abdullah Burazizah to replace Mohamed al-Hafi, who has held the post until now. Yet the vote, reportedly unanimous, came during an opaque session held at the chamber’s headquarters in Tobruk that was embroiled in controversy over a likely lack of quorum.

Observers fear that the appointment could open a new divide within an institution that until now had been able to remain somewhat aloof from the rivalries plaguing Libya, especially after Hafi deemed the measures adopted by Saleh invalid. The dispute could also represent an added obstacle to the start of a new political process in the country, and threatens to further shroud political battles in legal cover.

“It’s a very important issue. What we are seeing effectively is the Supreme Court becoming completely politicized and completely becoming part of the conflict,” said Jalel Harchaoui, associate fellow at the Royal United Services Institute and leading expert on Libya. He told Al-Monitor, “Now you have effectively a Supreme Court president recognized by Tripoli and another one who just got designated by Saleh.”

The Supreme Court is the highest judicial authority in Libya’s four-tier court system, and as such acts as the court of last appeal in legal matters, according to a report on the Libyan legal system published by New York University. The Supreme Court is composed of several chambers and, most importantly, has jurisdiction as a constitutional court.

The importance of this constitutional chamber, which until August had been dormant for several years, has already shown in the past how critical its decisions can be. In late 2014, the court ruled null and void part of an amendment to the Libyan Constitutional Declaration in a verdict that some argued should lead to the dissolution of the House of Representatives, and even to the return of the previous legislative authority, the General National Congress (GNA).

For some in Libya, however, the suspension of the constitutional chamber of the Supreme Court in recent years has been one of the reasons that facilitated the adoption of legislation and the passing of decrees, especially by the House of Representatives, that are not constitutional, in addition to having frozen the resolution of disputes such as the one over the constitutionality of the Saleh-controlled legislative house itself.

Otman Gajiji, former chairman of Libya’s High National Election Commission and local governance expert, told Al-Monitor that the chamber may have as many as 50-60 pending cases, with some of the most important ones involving the start of the House of Representatives' work, extensions of its mandate and approval of the Libyan Political Agreement signed in Skhirat, Morocco, in 2015. “There are a lot of very critical cases,” Gajiji said.

The parliament’s first steps to tighten its grip on the judiciary go back to last December, when the house passed, in a very opaque procedure, a controversial law amending the judicial system. The house also appointed Miftah al-Qawi, until then president of a minor judicial body, as chairman of the Supreme Judicial Council, responsible for organizing the country’s legal system, in place of Hafi, who until then held both this post and that of head of the Supreme Court. The reform came at a particularly sensitive time, given that Libya was on the verge of key elections — which never took place.

This process accelerated in mid-August, when the parliament issued yet another law approving the nomination of 45 new Supreme Court members and stipulating that they should take oaths before the House of Representatives, according to Tahra, a nonpartisan platform dedicated to countering disinformation in Libya. The decision was then rebuked and deemed illegal by Hafi, and within days the general assembly of the Supreme Court decided to reactivate the constitutional chamber in apparent retaliation. Tripoli-based Prime Minister Abdul Hamid Dbeibah welcomed this latest move.

Redoubling its bid, the parliament ordered in early September that the Supreme Court should begin sitting in the eastern city of al-Bayda instead of Tripoli. And Saleh informed Qawi and members of the Supreme Court that he was invalidating the appointment of Hafi as president of the country’s highest judicial authority, made by the GNA in 2014. The rift deepened further when Khaled al-Mishri, head of the High Council of State, a consultative body, contradicted Saleh in a letter affirming the validity of the Supreme Court sessions held in Tripoli.

Ignoring the messages coming from Tobruk, the constitutional circuit met for the first time Sept. 4 to begin looking at some of the pending appeals. Local media reported Hafi as saying that the court could begin issuing some rulings already in October. Making its final push, several members of the House of Representatives approved Sept. 15 the appointment of Burazizah as Hafi’s replacement as head of the Supreme Court, with Mishri’s apparent blessing. But Hafi has consistently considered Saleh’s decisions unlawful, and many expect that he will not relinquish his post.

Karim Mezran, director of the North Africa Initiative at the Atlantic Council and expert on Libya, believes that the appointment of Burazizah to the Supreme Court will not further deepen the rift in the country, noting that it is the result of a process that has been for some time underway and that, at least, he is a product of the judiciary and not of Saleh himself.

Gajiji, on the other hand, argued that these moves will delay a new political process in Libya. “Every time [Saleh] adds a new player that will obstruct the elections and the political process,” he said. “This is [another] delaying technique: We will be talking about the constitutional circuit and its rulings in Tripoli and in Benghazi, and we will not have elections.”

Harchaoui said that Libya is now entering a phase of the conflict that will be “extremely legal in character,” noting that some of the potential scenarios facing the country include an invalidation by the Supreme Court in Tripoli of the constitutional amendment passed by the House of Representatives in February, which shielded Fathi Bashagha’s government in the east.

He said that the current validity of the House of Representatives itself is also threatened, and noted that “the fact that Tobruk is on the offensive in order to defend itself” could even translate into drastic decisions rendering the government in Tripoli illegal. “This war is basically threatening to tear down all the few, small remnants of institutional unity in Libya. And this is potentially an earthquake that has to be really fully understood,” Harchaoui concluded.