Landmark ruling could have big implications for Libya's leaders

A recent judicial decision ruling that the former head of Libya's Constitutional Assembly should not have been elected given an oft-disregarded law that bans dual citizens from public office could have wide-ranging implications. 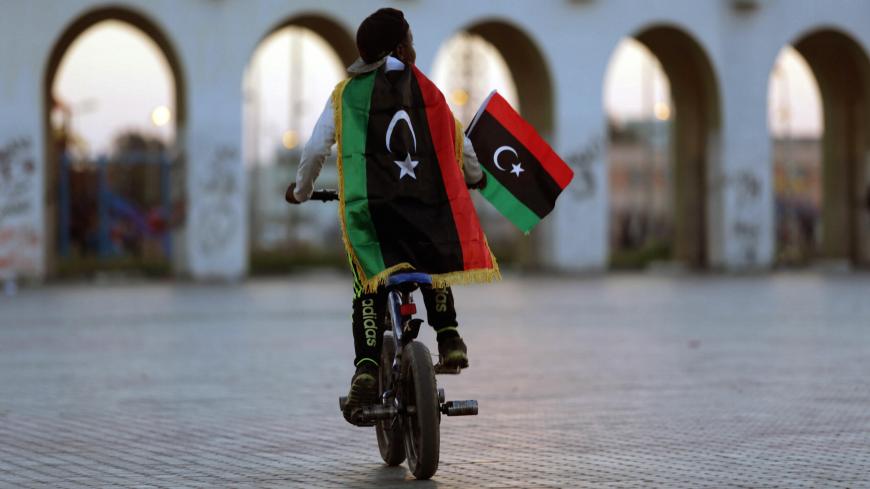 A boy wearing a Libyan flag takes part in a celebration marking the sixth anniversary of the Libyan revolution, in Benghazi, Libya, Feb. 17, 2017. - REUTERS/Esam Omran Al-Fetori

During the Moammar Gadhafi era in Libya, the regime was intolerable of any opposition, political parties were illegal and free press did not exist. Many Libyans who opposed the regime left the country and lived abroad. Many settled in the United States and Europe, mostly as political refugees. As the years passed, many of them gained the citizenships of their host countries.

However, in the late 1990s, as the country was opening up and relations with the West were improving, many such individuals returned to Libya — except the high-profile opposition leaders who were afraid to come back to Libya. After the regime was overthrown with NATO help in October 2011, most of the opposition leaders came back to the country and held high-ranking positions, including prime minister, speaker of parliament and even directors of the security apparatus in the new Libya.

However, no one seemed to pay attention to the fact that Libya’s Law No. 24 of 2010 stating that any Libyan who gains another citizenship without written permission from the minister of interior at the time automatically loses his Libyan citizenship and his right to hold public office, either elected or otherwise. The law is still applicable and has not yet been annulled.

In the euphoria of deposing the regime and the high hope of freedoms in the new Libya of 2011-12, no one seemed to care about the law. The Constitutional Assembly was elected on Feb. 20, 2014, to draft a new constitution, and many former exiles were elected to its chamber. One of them is Libyan-American Ali al-Tarhouni who became the head of the new body.

Of the members of the new body, Daw al-Mansouri, a lawyer by profession, questioned the legality of Tarhouni’s membership and quietly started considering his options. Mansouri noticed that Tarhouni is indirectly backed by Islamists in the Constitutional Assembly helping him dominate the discussions, get elected to head the new body on April 20, 2014, and have the final say on the internal working procedures within the 60-member assembly. Mansouri tried to have more members join him in taking the case to court, but no one seemed interested, either out of fear or believing the case would be inadmissible.

Mansouri told Al-Monitor, “Right after Tarhouni became chairman of the assembly, I started to question his membership in the assembly and how he got elected in the first place. Once I was sure, I decided to press ahead with the case — even without the support of other members.”

He said, “I became even more determined to have Tarhouni’s election invalidated as I watched him increasingly dominating the discussions trying to impose his own opinions despite the fact that we were required to vote on any proposed articles to be drafted and included in the new constitution.” The Constitutional Assembly was required to pass any draft of the constitution by simple majority of 35 members.

And indeed Mansouri complained to the court in eastern Libya in January 2016, and the case was postponed three times. But Tarhouni’s membership was suspended pending the outcome of the trial. When asked why so late, Mansouri said, “We had many complications and interruptions including the war of 2014, so practically we did not do much during the intervening period.”

On Sept. 20, Libya’s High Court in Tripoli issued its final verdict that indeed Tarhouni should not have been a member in the first place since he is a dual citizen of Libya and the United States. Tarhouni’s defense team failed to present the required documents set out in law No. 24, such as a written permission from the relevant authorities in Libya allowing him to have another citizenship and invalidating his Libyan citizenship once he became a US citizen. He is required to go through another legal procedure to reclaim his original Libyan citizenship and renounce his American one in order to be elected.

Asked by Al-Monitor what proof he had to present to court, Mansouri said, “It was a video recording of Tarhouni speaking in Seattle, the United States, where he lived and worked for many years teaching at the University of Washington before returning to Libya in March 2011.”

However, the case, underreported in the local media, made history in the judiciary system in the new Libya, and is likely to have wide implications, since there are many other former and current officials who should not have been appointed or elected in some positions as they have dual citizenship.

Al-Monitor asked Mansouri what can be done now with such individuals and if they can be prosecuted for forgery. He said, “Indeed they can be prosecuted even if they are no longer in their positions as per the law. They at least have to return the salaries and any other benefits they were paid while working. They also have to answer in court as to how they got elected while they were not eligible.” Asked if their work in the relevant bodies is no longer legal, Mansour said, “No, this is very unlikely since they were not a majority.”

In light of the new dialogue started in Tunis Sept. 26, to try to solve the political crisis, a group of Libyan activists took to the internet Sept. 29 to petition Ghassan Salame, the United Nations envoy to Libya, leading the talks, to make sure he is aware of the applicable Libyan laws as not to accept the nomination of any Libyan with dual citizenship to any position.

One of the leading activists is Fowzi Omaar who first started the petition on his Facebook page. Al-Monitor tracked Omaar down in Tripoli and asked him what he expects from his petition. He said, “I am expecting to alert Salame about the applicable Libyan laws as to make sure [he will] not break them by accepting the appointment of any person with dual citizenship.”

When told that such a law was passed under Gadhafi and many would dispute it, Omaar said, “As long as they are still valid and have not been repealed or amended, everyone must respect them.”

By visiting Omaar’s Facebook page, it appears that hundreds of Libyans are supporting his efforts. He said, “I expect thousands of Libyans to sign the petition.” On Oct. 2, Omaar sent a written message confirming to Al-Monitor that his petition was indeed delivered to Salame’s office in Tunis. He also noted that he is still “urging more Libyans to start their own petition to the UN envoy about the same issue.”

Omaar added, “[I] think more Libyans will come forward and petition the UN envoy now that I opened the way for them.”

It remains to be seen if the laws will be upheld while not repealed, or if they will be broken again just like in so many other situations. It would be a bad start at a time Libyans are seeking the rule of law and a new country where the judiciary is respected.