The latest meeting between Libya’s rival governing factions produced interesting points that could help the country, but was ultimately disappointing after both sides refused to recognize each other's legitimacy. 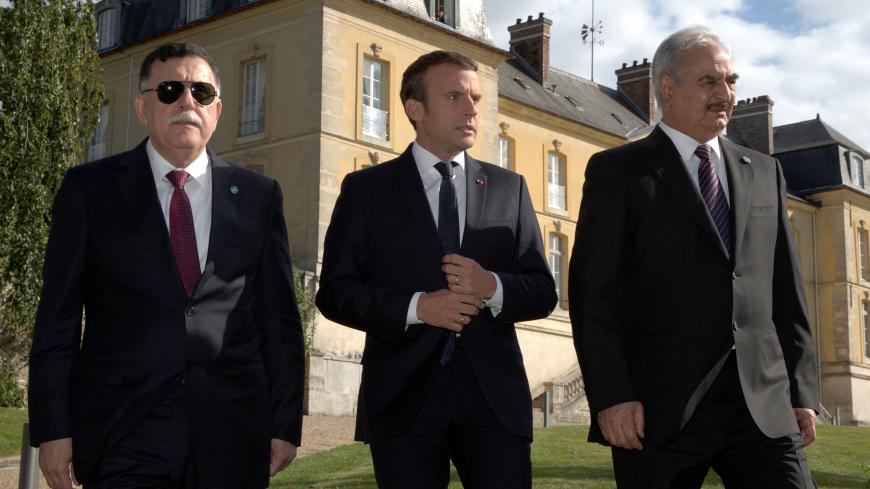 On July 25, 2017, at a serene historical site just outside Paris, French President Emmanuel Macron hosted a rare meeting between Libyan rivals, namely Gen. Khalifa Hifter, the commander of the Libyan National Army (LNA) who has the military upper hand in eastern Libya, and Fayez al-Sarraj, the head of the Government of National Accord (GNA) in Tripoli. Every now and then, Sarraj would talk of the capital being safe to create the impression that he is in control. But the harsh reality was and still is that Tripoli was and continues to be controlled by various militias that are nominally aligned with the GNA but are not fully under its control.

The final communique signed at the end of that meeting, and read out to the media while both men stood next to Macron, said both sides agreed to hold elections in 2018, refrain from use of force and continue to look for a political solution. Macron appeared satisfied with what was achieved, and he commended the two men for showing what he called “historic courage” before declaring that the “cause of peace [in Libya] has made great progress today.” However, little peace was actually brought to the war-ravaged country after the meeting. The country has not been in total war since 2014, but fighting is never far away.

Ten months later, on May 29, Macron did it again and played host to a larger group of Libyan politicians, which included Sarraj, Hifter, president of the House of Representatives (HoR) Aguila Saleh, and head of the Supreme Council of State Khaled al-Mishri. About 20 organizations, including the European Union, African Union and the Arab League, were also present alongside diplomats representing regional countries, including the United Arab Emirates, Kuwait, Algeria, Egypt and Tunisia. Four Security Council permanent members attended: Russia, the United States, the United Kingdom plus the host country, France.

The relatively large gathering intended to relay the message that Libya is important for the stability and security of both sides of the Mediterranean, and indeed important to international peace and security. European countries have been struggling to cap illegal immigration as well as potential terrorists coming out of Libya. Since the toppling of its leader Moammar Gadhafi in October 2011, Libya has been the preferred route for human traffickers. The International Organization for Migration in January 2018 estimated that about 120,000 people made it to Italy, which is less than it was a year before — but still far too much.

And again this second meeting ended with a communique, but this time no one signed it because “no one recognizes the other,” as Macron said when explaining why the final statement was not signed by those who verbally committed themselves to it. Indeed, Hifter puts Islamists, including the Muslim Brotherhood, on top of his list of hardest enemies. Of course, the hatred is reciprocated, which was made clear by Mishri in an interview with France 24 while still in Paris. He said, “I only recognize him [Hifter] as a de facto force, but I do not recognize his legitimacy,” before confirming that he is a member of the Brotherhood in Libya.

The same case of nonrecognition extends to others as well; Sarraj does not recognize Hifter as commander of the LNA nor Saleh as president of the HoR, and the two do not accept Sarraj as the head of the government, even though his government is recognized by the UN as the only government in Libya.

Regardless of this diplomatic disappointment over recognition, the final statement of the latest meeting contains interesting points that if implemented could help Libya see the light. For example, the parties agreed that they will accept the outcome of the elections that will take place Dec. 10, as proposed by UN envoy Ghassan Salame.

They also agreed to make the necessary legislative arrangements, including adopting a new elections law and ratifying a new constitution, which had been drafted months earlier. Back then, no one appeared enthusiastic enough to even discuss it in the on-and-off-again dysfunctional HoR. The HoR has to pass a law paving the way for the new constitution to be put into public referendum.

Again, all parties repeated their commitment to a peaceful solution to the conflict, which has paralyzed the oil-rich North African country for the last eight years. There is also a commitment by all parties that they will accept the outcome of the elections after they are finished and results become known. It is important that all parties publically and officially declare their acceptance of the elections outcome so there is not a repeat of the 2014 elections. Back then, different Islamist parties and sympathizers won about 30 seats of the 200 seats contested, and the rest were won by secularists and independents. Facing such humiliating defeat, the Islamists resorted to force by starting a military operation codenamed Libya Dawn in August 2014 to drive out those who actually won the ballots.

It is interesting to note that point 4 of the nonsigned statement commits all Libyan parties present at the meeting to “officially accept the requirements to conduct elections as outlined by Salame’s report to the Security Council.” In his May 21 report, Salame demanded that a new round of voters’ registration be opened in Libya, and he required that legislation to help conduct the elections be in place by September 2018 at the latest. Indeed, the High National Election Commission (HNEC) in Tripoli was targeted by the Islamic State on May 2, and it could be that the voters’ records have been damaged, although the HNEC chairman denied any damage to such vital database.

However, whatever was agreed to verbally should not be taken for granted. This is not the first time that the rivals met with the aim of ending Libya’s state of chaos and lawlessness.

It will be an outstanding achievement if Libya could be ready for elections within the window of six months between now and Dec. 10. The HoR must first finish the legislative prerequisites, such as a new election law and move to the next stage of putting the draft constitution to a referendum. Security is also a vital component of conducting successful elections, and security remains one area where Libya is hugely deficient.