A disobedience court warning filed by a wife against her husband is causing a stir in Egypt as it is the first time for a wife to take such a step. 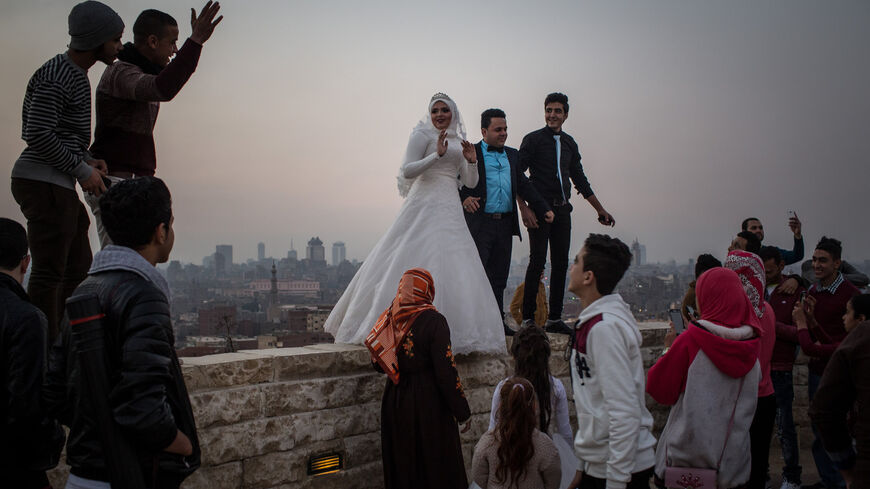 A newlywed couple pose for wedding photos on a wall in a park overlooking Cairo, Egypt, Dec. 10, 2016. -

When a 34-year old wife found herself alone fighting an abusive husband who abandoned his duties toward her and her children and he filed a number of lawsuits against her, she decided to avenge herself by sending him an official disobedience warning.

It is the first marital disobedience warning to be filed by a wife against her husband in Egypt's family court.

In the warning, lawyer Eman Mohsen mentioned the husband is considered disobedient because, “First: he expelled his wife from the marital home. Second: He separated his children, as he took the two sons to live with him and left the two daughters to his wife. Third: he took custody of young children (which is the right of his wife). Fourth: He accused his wife of stealing and defaming her."

“I’ve been working on women’s cases for many years and I’ve been thinking about this warning, because if a man can make a warning of disobedience against his wife, a woman can do this too,” the lawyer of the wife, Eman Mohsen, told Al-Monitor. “When the husband sent an official disobedience warning to his wife, I suggested that she too send him a warning and she liked the idea."

Mohsen also said that husband disobedience to his wife has an Islamic reference as there is a verse in the Quran that says, “If a woman fears from her husband misconduct or desertion, there is no sin upon the couple if they reach a reconciliation between themselves; and reconcilement is better.” (El-Nisaa 128)

However, there is no law or legislation that punish a disobedient husband.

“There are rights and duties between each spouse, and whoever deviates from this is considered disobedient, and in Islam the four imams [Abu Hanifa, Malik, al-Shafi and Ibn Hanbal] agreed that there is a husband's disobedience,” the lawyer said.

Mohsen noted that in the warning she mentioned that the wife needs a divorce in exchange for her giving up her legal rights, and to take her children in her custody. She also wants him to pay monthly allowance to spend on his children, and to pay school expenses.

“I’ll use this warning in all of the women's cases from now on. I’ll keep hoping that one day there will be a law that backs the woman against a disobedient husband who abuses and harms her,” she added.

At the same time, women’s rights advocates believe that such a warning can influence public opinion and raise awareness about the importance of amending the family laws (personal status laws) that were first established in 1920. As regarded by many women’s rights activists, most of the articles of the current law have worked against Egyptian women. So, there have been various efforts to reform the articles.

In May, President Abdel-Fattah al-Sisi said via phone call on the TV show "Newsroom" on Sada El-Balad TV channel that there was an urgent need for a new balanced personal status law in Egypt to solve family issues honestly and impartially.

Also, in March 2021, the president said that the government was keen on seeing that any new law would be balanced and served the public’s interest.

“The family laws should be amended, because a woman may get a judgment but implementation of the judgement remains the big problem,” Ahmed Mohamed Refat, a women’s rights advocate and administrator of a Facebook group titled “Egyptian Family law,” told Al-Monitor.

In his opinion, the husband's disobedience warning is mainly aimed at influencing public opinion on the importance of changing the family laws.

“Laws should be amended every 15 years to fulfill the needs of people at that time,” Refat told Al-Monitor.

However, lawyer Dina Adly Hussien believes that the disobedience warning is not of any importance.

“In the law there are many cases that a woman can file against her husband; if he beats her or if he is abusive she may file for divorce, and if he doesn’t support her financially she may file a complaint against him for not paying her nafaqa [maintenance]. Each case has its own way and documents required. But a husband’s disobedience warning doesn’t make any sense because it doesn’t have any legal meaning,” Hussien told Al-Monitor.

But Mohsen insists her warning could be of great benefit. “Every law started only with an idea. And a husband’s disobedience warning can really make a change,” she concluded.