A construction project has bulldozed the remains of a Byzantine church, angering Gaza’s Christians, archaeologists and historians. 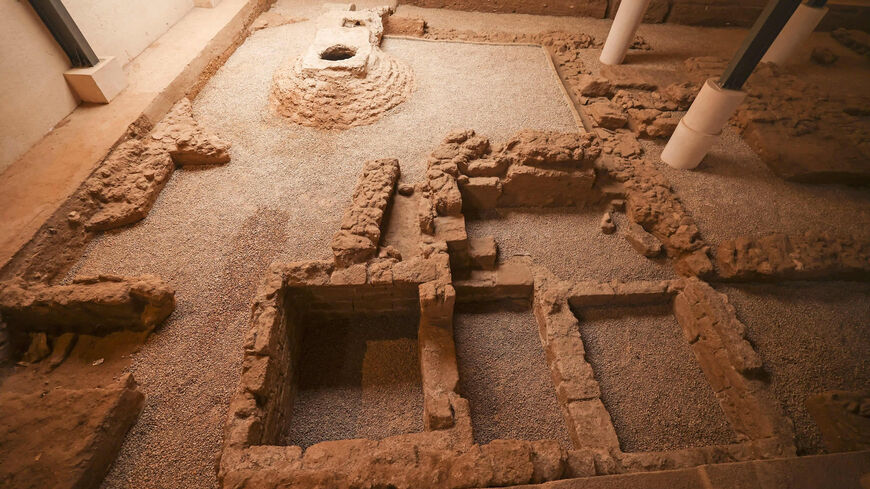 Despite the fact that six years have passed since the discovery of a church dating back to the Byzantine era, specifically to the sixth century, a state of anger and indignation continues to reign among researchers and experts about this great discovery in central Gaza City, amid Hamas’ ongoing encroachments on the relics.

These researchers have called on UNESCO to cooperate with them in the search and preservation of Gaza’s antiquities.

In 2016, the remains of a Byzantine church were found during the construction works of a huge commercial building belonging to the Hamas government in Palestine Square in central Gaza City.

The unearthed church dates back about 1,500 years (395-636). The construction workers found large marble columns, 3 meters (10 feet) long, carved with inscriptions, as well as column bases, a Greek cross with equal arms and 15 artifacts belonging to the Byzantine era.

But despite the importance of this archaeological discovery, officials are continuing their construction works at the site.

Hiyam al-Bitar, an antiquity researcher who was on-site when the discovery was made back in 2016, told Al-Monitor, “Gaza is full of treasures from bygone eras — historical remains that are still underground. The excavations carried out revealed some marble stone pieces, which include a Corinthian-style marble crown carved with inscriptions of acanthus leaves.”

She said, “The diameter of the crowns’ base is approximately 60 centimeters [24 inches], which indicates the grandeur and immensity of the crown and that of the column that tops it. This also gives an idea of the enormity of the building that contained the crown."

Bitar explained, “Upon inspection of the site and field examination, it became clear to me that the place was a large church building — not a small one but a major church or a cathedral dating back to the sixth century, the Byzantine era, given that the column bases include drawings of the Greek cross.”

She noted, “We cleaned and scientifically documented the columns, which were then transferred to the Pasha's Palace Museum for display for visitors and researchers to have a look at the relics from the Byzantine era.”

She added, “During this era, great churches were built, notably during the reign of Emperor Justinian, who, according to historical references, had a keen interest to build churches.”

Bitar said that the first field discoveries proved that this was indeed a large church.

“We are extremely proud of this major discovery, which is very significant to us as it is located in the upper area in the Old City close to the Omari Mosque and the 15th-century Porphyrius Church. Hence, the importance of the site from an archaeological and historical point of view,” she explained.

Bitar hopes that UNESCO would respond to calls to dig for and preserve Gaza’s monuments and antiquities.

According to an investigation conducted by Arab Reporters for Investigative Journalism in 2021, 31 archaeological sites disappeared as a result of urban expansion and continuous construction encroachments, and their failure to register them as archaeological sites in the Palestine Land Authority in the Gaza Strip, which is responsible for protecting monuments.

An antiquity researcher told Al-Monitor on condition of anonymity, “The site that was unveiled [in 2016] has an area of 2,000 square meters [0.5 acres]. How could the construction works continue when there is a discovery of a huge church dating back more than 1,500 years and how could they continue to be interested in turning the site into a commercial mall?”

He said, “This is a blatant destruction of the cultural heritage of Palestine. How could the monuments also be transferred from one site to another without proper procedure? This is an encroachment on a church of this historical significance. This has angered a large portion of Christians in Gaza, but all of them remain silent for fear of reprisal from Hamas, which considers the land an Islamic endowment land and not a Christian one.”

The source noted that the Higher Committee of Churches Affairs in Palestine had expressed its deep concern over the measures in dealing with historical monuments and discoveries in the Gaza Strip.

The Ministry of Tourism and Antiquities in Gaza did not respond to Al-Monitor’s requests for comment on the excavation and demolition works at the large archaeological site.

But in a 2016 statement, the ministry cited the lack of funding and training that caused it to halt the operations to extract and preserve the relics.

The ministry has 40 excavators only, which is not enough to do the work at the church site, which covers 2,000 meters (1.2 miles) and is more than 10 meters (33 feet) deep, the statement continued. Any archaeological mission at this massive site requires millions of dollars for excavations to reveal the remainder of the artifacts and relics, according to the statement.

Muhammad al-Zard, archaeology researcher at the Islamic University of Gaza, told Al-Monitor, “This archaeological site is very important as it is located inside the Old City, which was home to several civilizations that left behind major monuments and historical treasures.”

He said, “During the discovery works [carried out at the church site], we unearthed several columns, animal carcasses, pottery and dishes that were broken because of the bulldozers.”

Zard noted, “But we couldn’t do anything else [and work stopped]. We don’t have the capabilities. Careful excavation necessitates big teams and adequate tools so as not to destroy the remains. We have appealed to UNESCO several times to help save Gaza’s monuments from destruction as a result of the heavy use of bulldozers and heavy machinery.”

He added, “The large diameter columns that were discovered indicate the size of the building. It is one of the ecclesiastical religious buildings seen in the mosaic of a banquet map in Jordan. Unfortunately, the construction [works] on this site has destroyed its archaeological value.”

Zard concluded, “Construction works have to be stopped and fences erected around it to protect it and turn it into an archaeological exhibition for visitors. This would also generate more income for the Gaza Strip, which would be far better than the commercial mall that does not hold any historical value.”