Egyptian excavations in the northern Gaza Strip have unearthed the remains of a Roman cemetery dating back 2,000 years and containing nearly 100 graves. 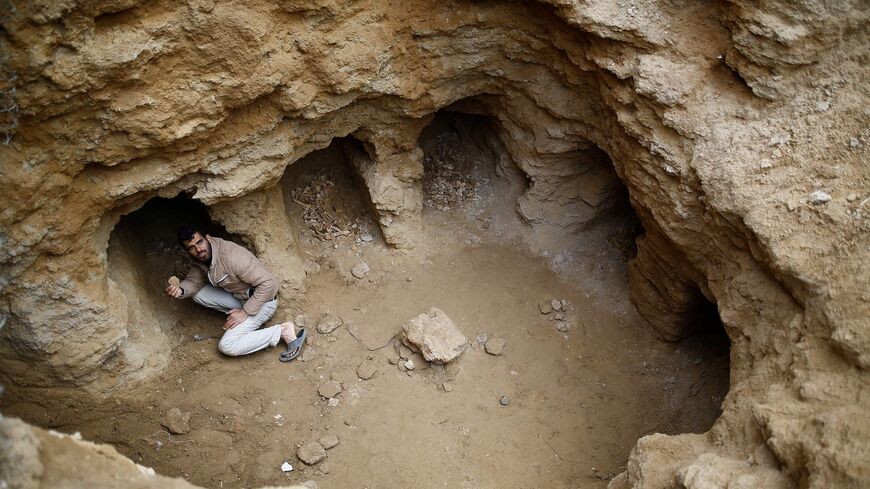 Abdul Karim al-Kafarnah, a Palestinian resident of Beit Hanun, collects pottery fragments at a freshly discovered cemetery in the garden of his house in the town in the northern Gaza Strip, on Jan. 26, 2018. Experts said the graves were part of a loculus tomb that possibly dates from the late Roman-Byzantine era in the fourth to sixth century CE. - MOHAMMED ABED/AFP via Getty Images

GAZA - A Palestinian citizen recently found large archaeological stones inside an excavation site where an Egyptian team is working to establish a residential area in the Jabaliya refugee camp in the northern Gaza Strip.

A team of archaeologists led by French archaeologist Rene Elter visited the site on June 26, where they found remains of what is believed to be the largest cemetery in the Gaza Strip dating back to the Roman era, which, they said, is estimated to date back approximately 2,000 years.

Gaza is home to a panoply of major archaeological sites buried under urban sprawl. This was the result of neglect by government and other authorities who lack the necessary experience and knowledge about the important value of such antiquities. Several sites have also been exposed to illegal excavations and looting, while Israeli planes have bombed archaeological areas located close to military sites of factions in Gaza.

The cemetery is the second to be discovered in the area this year. After inspecting the recently discovered site, Elter said in a press statement that the new site contains 100 graves; the first cemetery that was discovered near the same site contained 40. All of the discovered tombs are adorned with multicolored paintings and bayleaf crowns, according to Elter.

Gaza has been home to various ancient civilizations throughout history, and many Roman ruins are found there such as the Byzantine Church in the Jabaliya camp. A large majority of Roman cemeteries are located in the northern coastal areas of the Gaza Strip and close to the ancient Anthedon Harbor, the second largest port in Gaza during the Roman era. The harbor served as an important station for merchants between Gaza and today’s Israeli cities.

In the wake of the May 2021 conflict between the Palestinian armed factions in Gaza and Israel that resulted in the extensive destruction of residential buildings, Egypt dispatched a team of workers and engineers to build three residential cities in the northern and central Gaza Strip.

During the dredging operations, a set of ancient antiquities dating back to the Roman era were unearthed. Chief among these were tombs, church remains, and pottery pots containing gold and coins. These sites were subsequently closed for a specific period of time until archaeologists finished the excavation process and transferred the artifacts to safe locations.

In late June, the so-called Government Action Follow-Up Committee in Gaza launched an archaeological guide for Gaza in which it dedicated a detailed space to the history of archaeological sites, both Islamic and Christian, and documented a part of the Ayyubid, Mamluk and Ottoman Islamic civilizations. The guide also aims to promote and raise awareness of the importance, greatness and ancient character of Palestinian civilization.

Salam al-Fairani, a Gazan construction worker, told Al-Monitor, “During my participation with Egyptian workers in deep excavations of more than 4 meters to lay the grounds of an Egyptian residential city, the bulldozers removed large stones from the ground during the excavation. At first, I did not realize that they were artifacts, but it was not long before stones started to appear with the progress in excavations. I informed the site manager, who proceeded to contact the competent authorities, which, in turn, instructed the Premiere Urgence Internationale Organization specialized in antiquities to assess the site.”

In this context, Fadl al-Atal, an archaeological expert, told Al-Monitor that the cemetery contains bodies of the inhabitants of the historical Anthedon Harbor area of the Roman era, and work is currently underway to protect it from any encroachment.

Atal said that analytical studies are being conducted with the aim of unearthing the cemetery owners and their positions in society.

Gaza, he continued, is home to many ancient monuments dating back to the Byzantine, Roman, Mamluk, Persian and Canaanite eras.

A set of Roman antiquities, he added, began to recently appear, including cemeteries and churches, among others. “All of these monuments and archaeological sites are part of the history of our people and our cultural identity, and they must be preserved and completely protected,” Atal added.

He pointed out that the lack of control over such archaeological sites, especially those located by the shore and that were swept away by sea waves, as well as the absence of experts specialized in this type of excavation, led Gazans to excavate and sell stones to quarries that turn them into concrete. This, he added, also led Gazans to steal and sell ancient artifacts to specialists.

Atal continued, “The Gaza Strip lacks museums capable of housing ancient artifacts due to the lack of interest in this field as well as the lack of experts and specialists.”

He said that the wide presence of sites in various areas of Gaza requires more efforts to train teams of local experts to excavate antiquities and train other young cadres in Gaza to preserve archaeological sites and push for the establishment of a museum.