The Ministry of Tourism and Antiquities in the Gaza Strip announced the discovery of the ruins of a burial site dating back to the Roman era, during the construction works of an Egyptian housing project in Gaza. 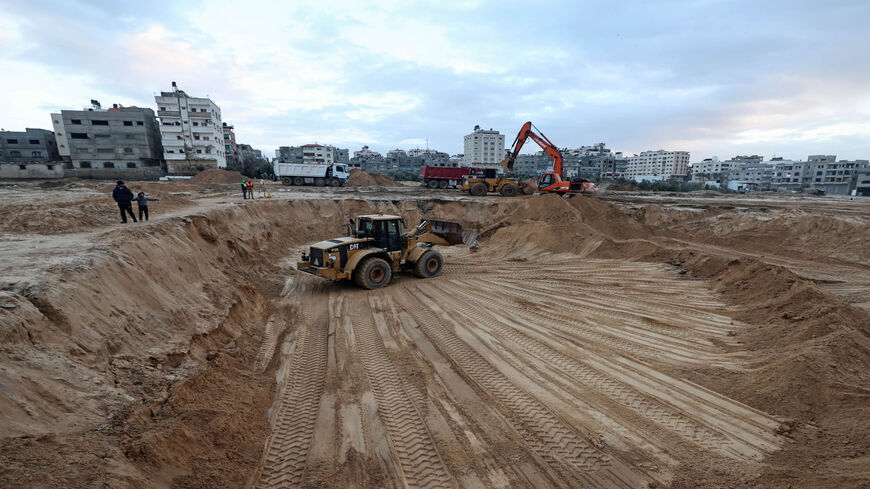 A general view shows the construction site where an ancient cemetery reportedly dating back to the Roman-era was unearthed, Gaza City, Gaza Strip, Jan. 31, 2022. - Mahmud Hams/AFP via Getty Images

GAZA CITY, Gaza Strip — The Ministry of Tourism and Antiquities in the Gaza Strip announced Jan. 31 the discovery of the ruins of a Roman cemetery dating back 2,000 years in Beit Lahia in the northern Gaza Strip.

The discovery was made as bulldozers were digging for an Egyptian-funded housing project in the city.

In an official statement, the ministry said that its teams conducted preliminary examinations and seized objects found at the cemetery, stressing that the Ministry of Public Works and Housing was notified to halt construction works and cordon off the area.

The statement continued that a specialized committee was formed to study the archaeological discovery, identify its historical value and make appropriate recommendations to deal with the discovered site.

According to local media reports, some people used donkey-drawn carts to loot many artifacts from the site, confirming that a week before the ministry’s announcement, many residents in the area had found several relics such as coffin lids and inscribed bricks.

Al-Monitor tried to reach out to the Ministry of Tourism Antiquities for commentary, but the ministry refused to give any media statement until the completion of the site’s examination and evaluation.

An eyewitness who spoke to Al-Monitor on condition of anonymity said that several locals had been illegally digging after having discovered ancient stones in the area.

It was not until two weeks of illegal digging by citizens that the ministry’s team showed up at the site.

“Many large archaeological stones had been removed from their original place, and some of the cemetery’s items have disappeared,” the eyewitness said.

He noted that when the ministry’s team arrived on-site, they seized the relics they found, and another team within the ministry tried to retrieve the items that the citizens got hold of.

“They [locals] also took a coffin lid with a cross carved on it,” the source said.

According to the same source, the ministry did not want to attract any media hype around the Egyptian-funded housing project that was being built on the land. He added that on Feb. 6 three new tombs were discovered and a pottery urn, but the ministry kept silent on this.

“The cemetery lies on the periphery of the Egyptian project that is being built, and where the construction works are still ongoing. They were not halted as the ministry announced,” the eyewitness said.

A source from the Ministry of Public Works and Housing, who declined to be named, told Al-Monitor that the construction works in the area were suspended for one day only, and resumed after the Ministry of Tourism seized the relics that were discovered on the same day it issued the statement.

“The discovered cemetery is located on the outskirts of the city and not in the center,” the ministry source said, adding that it was unlikely to change the location for building the housing units. “There has not been any talks with any governmental or nongovernmental bodies about moving the project to another location."

Journalist Amjad Yaghi lamented on his Facebook page the fact that several people ransacked the archaeological site before the Ministry of Tourism had the chance to send its team there first, adding that this cemetery is believed to be an extension to the city opposite the old Gaza Port.

He asked why the Ministry of Tourism did not examine the site before it was allocated to the Egyptian housing project, explaining that the area is known for its archaeological finds with many indications that it was previously home to the original inhabitants of Palestine and to some of the region’s civilizations.

“The competent authorities should have had the area examined by experts before having issued the construction permit,” Yaghi said.

Ghassan Wishah, a Palestinian historian and head of the Department of History and Archaeology at the Islamic University of Gaza, told Al-Monitor, “The cemetery dates back to the late Roman Empire and the early Byzantine period some 1,600 years ago, i.e., prior to the Islamic era,” noting that not much information has been disclosed so far.

“According to the excavations and the preliminary studies of the cemetery, about five tombs were discovered along with pottery items. The inscriptions and pottery and the nature of rocks indicate that the relics belong to the Byzantine era, especially the coffin lids that are adorned with crosses,” he said.

Whishah noted that it was to be expected for a cemetery to be found in that area, especially since there was a huge commercial port next to it that connected Gaza to the world, reckoning that a Roman temple or a Byzantine church could be discovered in the area, too.

Although the cemetery stretches over a small area only, it indicates the presence of other relics or an entire neighborhood. In the Byzantine era, cemeteries were usually built close to the community so they could remain in contact with their dead, who were held in high esteem and had great importance according to the beliefs and culture in those times.

“Gaza is full of undiscovered antiquities. It requires huge projects and funding as well as special tools to reveal them,” Wishah said.

He added that Gaza is one of the oldest inhabited places on earth and was home to about 18 civilizations throughout history.

“During the Roman era, Gaza was known as the ‘holy’ city,” he said.

Commenting on the looting of the antiquities, Wishah stressed the lack of awareness of the importance and value of heritage among Gazans, and that Gaza needs awareness-raising campaigns to communicate information on this subject.

He noted, “The ministry lacks the necessary equipment and capabilities for digging operations. The discovery of the cemetery was just a mere happenstance.”

Wishah noted that the Islamic University of Gaza was ready to provide service, advice and assistance to the Ministry of Tourism to find out more about the cemetery.

On Jan. 24, the Ministry of Tourism inaugurated the Byzantine Church that dates back to the fifth century, after it had been restored. The church is considered one of the most significant churches in the Levant with its valuable mosaic panels, inscriptions and pottery.