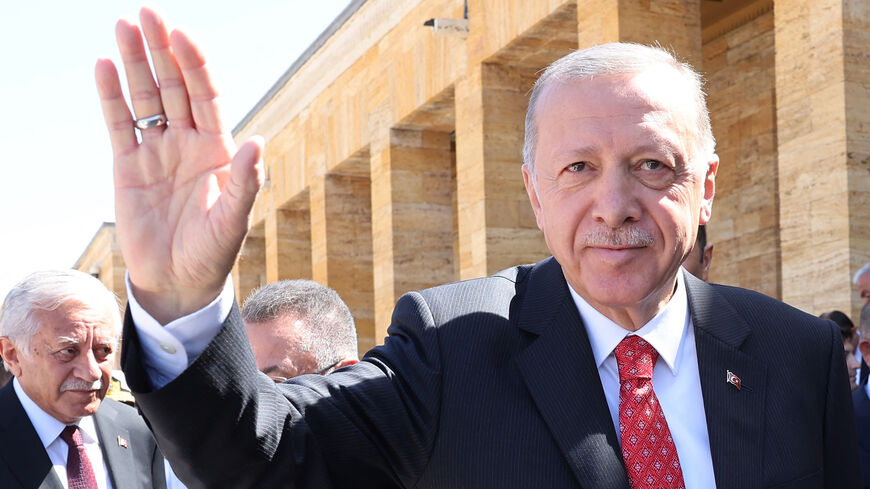 Turkish President Recep Tayyip Erdogan waves during Turkish Armed Forces Day to mark the 100th anniversary of Turkey's victory against the Greek army in the Dumlupinar Battle in 1922, at Anitkabir, at the mausoleum of Turkish Republic's Founder Mustafa Kemal Ataturk, in Ankara, Turkey on Aug. 30, 2022. - ADEM ALTAN/AFP via Getty Images

ISTANBUL — Teachers have become the latest professional group to draw the ire of Turkish President Recep Tayyip Erdogan following a demonstration in Ankara that ended in a violent police reaction.

Responding Thursday to calls for teachers to boycott professional exams due to be introduced in November, Erdogan described the move as a “malicious attempt to use our teachers as political material.”

Teachers unions and main opposition leader Kemal Kilicdaroglu have backed a boycott of the exams, which they say are unnecessary and an added burden to staff.

“Are you an architect of education or are you one of those who walk around as a looter?” Erdogan asked a teachers’ appointment ceremony in Ankara. “We need teachers who will mingle with our children, not those who wander the avenues and streets.”

The word “looter” has significant political resonance, having been deployed by Erdogan to describe those who took part in the nationwide anti-government Gezi protests in 2013. The president and his supporters now apply the term to anyone taking part in demonstrations, no matter the nature of the event.

Kilicdaroglu, who heads the Republican People’s Party, responded on Twitter to Erdogan’s remarks. “Erdogan, did you call the teachers looters?” he asked. “Teachers, unite now! If you take this exam, you will not prosper. They're beating you, that’s the level they’ve come to.”

The verbal attacks on teachers — who follow university lecturers, lawyers and doctors as targets for government censure — came after a protest in Ankara on Tuesday that saw a group of private sector teachers attempt to stage a protest over working conditions outside the Education Ministry.

Police intervened, using pepper spray and violently dragging away a number of the protesters. Nine were arrested, according to the Private Sector Teachers Union.

As footage of the police response spread across social media, Interior Minister Suleyman Soylu singled out one of those detained as a “professional activist” who had been “repeatedly detained” by anti-terrorist police in Ankara.

The minister even posted a photograph of the woman holding a flag of the left-wing People's Democratic Party (HDP) — Turkey’s third-largest parliamentary party. In an apparent effort to draw a line between the HDP and the outlawed Kurdistan Workers Party (PKK), Soylu referred to the party as the “HDPKK.”

“Aren’t you ashamed to pit the professional activist HDPKK supporter’s hand against the police and the teacher?” he said in a tweet addressed to Kilicdaroglu.

The teachers union responded to Soylu’s message by stating that teachers “will not feed any of our friends to your political polarization.”

In a statement to the ANKA news agency, Ozan Findik, a board member of the Private Sector Teachers Union, said the union was denied permission to make a press statement outside the Education Ministry building.

“We wanted to make a public press statement in a peaceful way,” he said. “But we were subjected to tremendous violence and we were targeted directly with gas.”

Despite the uncompromising approach toward public displays of protest and dissent in recent years, there are some signs that Turkey’s Constitutional Court could be moving to address the imbalance.

In a ruling published Thursday, the court decided that the police acted unconstitutionally when they blocked a march by public sector workers in Ankara in 2015.

The demonstrators, who wanted to accompany a union delegation to talks at government offices, were pepper sprayed as police barred their way on the grounds that the route had not been authorized by the governor’s office.

“Everyone has the right to organize unarmed and peaceful meetings and demonstration marches without prior permission,” the court ruled.

In a further development, police launched an investigation into Istanbul's security chief, Hanifi Zengin, over alleged threats he made to journalists covering a health care workers’ protests in June.

The investigation, which was announced on Sunday, came after the  Media and Law Studies Association filed a criminal complaint against Zengin over the same incident. He was also the subject of a legal complaint after he was filmed apparently manhandling a female protester during June’s banned Pride March.

Erol Onderoglu, the Turkey representative of Reporters Without Borders, said the investigation “is just one step" and "we want to see results.”