Eyewitnesses describe photographer Bulent Kilic being shoved to the ground, his hands cuffed behind his back as police placed their feet on his spine and demanded his press card. 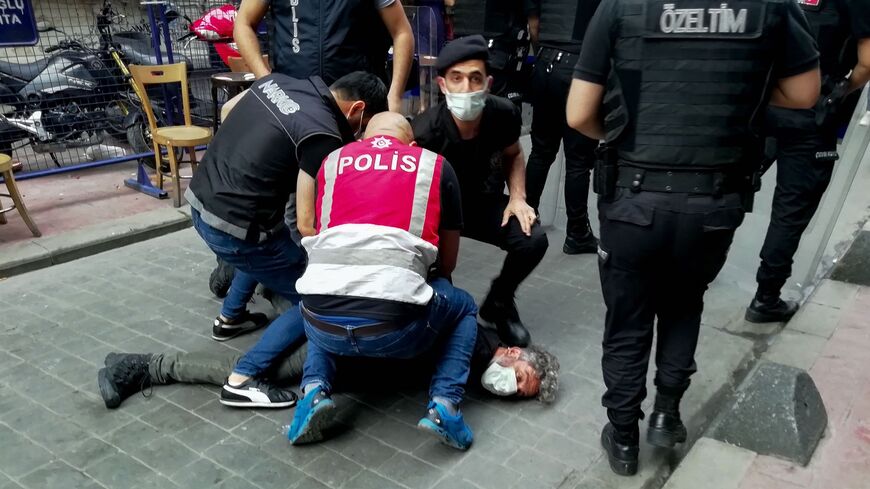 Police officers arrest AFP photographer Bulent Kilic while covering a Pride march in Istanbul that had been banned by authorities on June 26, 2021. - HACO BISKIN/Gazete Duvar/AFP via Getty Images

Senior Turkish officials are seeking to justify the violent weekend attack on Agence France Presse photographer Bulent Kilic as he was covering a Pride march in Istanbul, part of a broader pattern of state-incited violence against journalists seeking to document government abuse, rights groups say.

All four deputy interior ministers took to Twitter to push back against the main opposition’s denunciations of the attack, which also saw dozens of LGBTI protestors subjected to police assault. Pride marches have been banned for the past seven years amid an escalating campaign to criminalize Turkey’s remarkably resilient gay community.

“Detaining those who resist the police during illegal demonstrations is not barbarity,” wrote Mehmet Ersoy, shifting blame on the victim much as his fellow deputy ministers did.

The attack on Kilic has sparked indignation among fellow journalists with 14 media organizations planning separate rallies in Istanbul, Izmir and Ankara tomorrow to protest violence against the press. The conflict has escalated ever since the government issued a circular just before May 1, when anti-government protests typically occur, banning audio visual recordings of citizens and police at public rallies.

“There was an attempt on my life,” Kilic declared in a series of tweets illustrated by photographs showing police officers pinning him to the ground and stepping on his back and his neck. He has vowed to seek justice “for as long as I live.”

Kilic was briefly detained on grounds of “resisting police,” a catchall justification for detaining thousands of protestors and journalists in recent years.

Eyewitnesses say Kilic was shoved to the ground, his hands cuffed behind his back as police placed their feet on his spine. “Bulent said, ‘I am a journalist’ and one of them responded ‘I don’t care.’ Another of them put his foot on Bulent’s neck and he shouted ‘I can’t breathe.’ At that point we all rushed to help,” recalled Haci Biskin, a photojournalist for the online independent news outlet Duvar. “Police demanded he show them his press card even as his hands were cuffed, it was farcical,” he told Al-Monitor. Police then approached Biskin and told him to delete the photos.

“I refused,” he said. When they continued to harass Biskin he told them, “Just arrest me” and walked away.

“They eventually gave up,” Biskin said.

The Istanbul Security Directorate claimed in a statement today that it had “realized” that Kilic — who was carrying a camera at the time of the incident — was a reporter only after he was taken to the police station for questioning along with 45 protesters.

Erol Onderoglu, a Turkey representative for the Paris-based advocacy group Reporters Without Borders who also leads the media monitoring team at the online independent news portal Bianet, said violence against journalists has been on the rise ever since Suleyman Soylu, the scandal-spattered interior minister, took power in the wake of the failed coup to overthrow Turkish President Recep Tayyip Erdogan in July 2016. The hawkish Soylu has been at the forefront of spiraling repression, notably against the Kurdish movement.

Onderolgu noted Bianet had documented over 150 physical attacks against journalists since Soylu took over the ministry in August 2016. “There’s been a growing sense of impunity among the police whereby they feel, sense that if they attack a journalist who is critical of power they won’t be punished for it,” Onderoglu told Al-Monitor. The phenomenon has intensified since the March 2019 municipal elections, which saw Erdogan’s ruling Justice and Development Party (AKP) lose Istanbul and Ankara to the opposition.

Though formally a member of the AKP, ideologically speaking Soylu carries the flag of Erdogan’s informal coalition ally Devlet Bahceli, leader of the far-right Nationalist Movement Party. The distinction allows Erdogan to distance himself from some of the thuggery. However, Soylu has been under growing pressure ever since fugitive mobster Sedat Peker unleashed a series of incriminating videos detailing alleged corruption by him and his various associates on a massive scale. The pressure appears to have propelled the minister to act even more boldly to assert his continued grip as the AKP continues to bleed in opinion polls.

LGBTI people are among the favorite targets of Turkish police, who operate under Soylu’s authority. Emma Sinclair-Webb, Turkey director for Human Rights Watch, said the government was being “opportunistically homophobic.” She told Al-Monitor, “They are trying to mop up conservative elements outside the party by appealing to them on culture wars.”

The past month has seen the climate of impunity grow even darker, notably with the murder of Deniz Poyraz at the Izmir headquarters of the pro-Kurdish People's Democratic Party (HDP) on June 17. The gunman, identified as Onur Gencer, later confessed he had entered the building “with the intention to kill everyone who might have been in the office at the time.” It was no random act of violence. It emerged that Gencer had spent time in Syria, trained at a weapons range and had spent time snooping within the HDP building, which is closely surveilled by police. “It’s inconceivable that they were unable to spot this guy who was casing the joint and taking a language class in the same building,” Sinclair-Webb said.

The manner of Gencer’s eventual arrest stood in stark contrast with that of Kilic. “He was extremely politely marched to the police car. He was treated like royalty. I haven’t seen anyone who has committed such an atrocity treated with such kid gloves,” Sinclair-Webb added.