As Ankara tries to ban recordings of both citizens and police at protests, press freedom advocates in Turkey are fighting back. 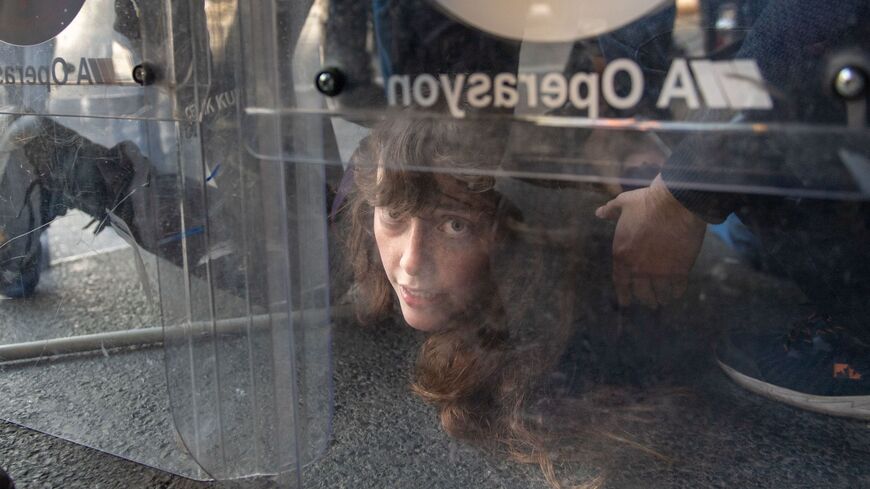 Turkish police detain a demonstrator during a May Day rally in Istanbul, on May 1, 2021. - BULENT KILIC/AFP via Getty Images

Turkish civil rights groups are taking legal action on a controversial circular issued April 30 by Turkey’s General Directorate of Security banning all audio-visual recordings of citizens and police at protests, in a further blow to press freedom in Turkey.

The Ankara Bar Association has demanded the circular be repealed. Its timing suggested that its immediate purpose was to prevent reporting on protests planned for May Day, when police brutality against demonstrators typically soars. In its petition to the Council of State, which adjudicates administrative decisions, the bar association noted that immediately after the circular was issued, police prevented a reporter from filming “disproportionate police violence” against demonstrators seeking to make their way to Istanbul’s Taksim Square.

For Turkey’s beleaguered media workers, the circular is simply an official stamp of approval on police violence against them. The figures speak for themselves. In a report issued May 3 marking World Press Freedom Day, the Turkish Journalists Union noted that in the past year alone, six journalists were beaten during police detention. A further 44 journalists were physically attacked on the job. Some 47 journalists are currently in jail on charges related to their work in the media, while 274 journalists were prosecuted in 128 different cases to do with their work or social media posts. Coupled with the near full control of the media by government cronies, this grim picture bolsters Turkey’s image in recent years as one of the most repressive countries for journalists in the world.

Turkey’s hard-nosed interior minister, Suleyman Soylu, has defended the ban, claiming that its purpose is to protect the privacy of individuals. “There is no breach of the constitution or of democracy,” he insisted. It will supposedly also prevent the police from being distracted while performing their duties. Rights groups claim the opposite, adding that the wording of the circular fails to clarify whether the ban applies to members of the press at all.

Emma Sinclair-Webb, Turkey director for Human Rights Watch, said, “It’s up to the police to decide how they are going to implement it. Whether it's applied to journalists or not, it’s outrageous and completely unlawful.”

Sinclair-Webb went on, “This is a circular and carries no status in law. You couldn’t pass such a law because there’s no necessity or proportionality in a measure that imposes a blanket ban on people recording protests and things they see. That’s a very fundamental violation of people’s liberty.”

She added, “When you hear Soylu saying it’s not anti-constitutional it’s just plain wrong. It's just more overreach by the interior minister. This is the expansion of the security state.”

There are few signs that the circular is being heeded. Videos of police violence continue to circulate on social media. Footage of police raiding a mosque in the southern province of Gaziantep and forcibly dispersing a congregation gathered in defiance of COVID-19 lockdown measures with tear gas provoked an outcry. Images of police shoving members of a fundamentalist Islamic sect, the Furkan Foundation, and spraying them like insects with gas canisters prompted comparisons with Israeli security forces and the harsh treatment of Palestinians. The foundation’s leader, Alparslan Kuytul, who is a fierce critic of President Recep Tayyip Erdogan and his Justice and Development Party (AKP), said his flock observed social distancing rules and were masked when they gathered in the mosque for “itikaf,” the Islamic practice of remaining in isolation in a mosque or one’s home with the purpose of devoting oneself to prayer during the last 10 days of Ramadan.

“They detained 56 of our brothers. The scenes are no different from the torture inflicted by Israel in Palestine,” he said in a series of tweets criticizing the government.

The anger was sharpened by the AKP government’s own double standards, allowing its own to ignore lockdown rules and gather for funerals and party meetings. Erdogan and a bevy of lieutenants attended the funeral of the father of a local AKP mayor in Istanbul Sunday amid a record surge in COVID-19 cases.