The Jordanian government arrested members of the Jordanian Teachers' Syndicate following a protest for higher wages in front of government headquarters in Amman. 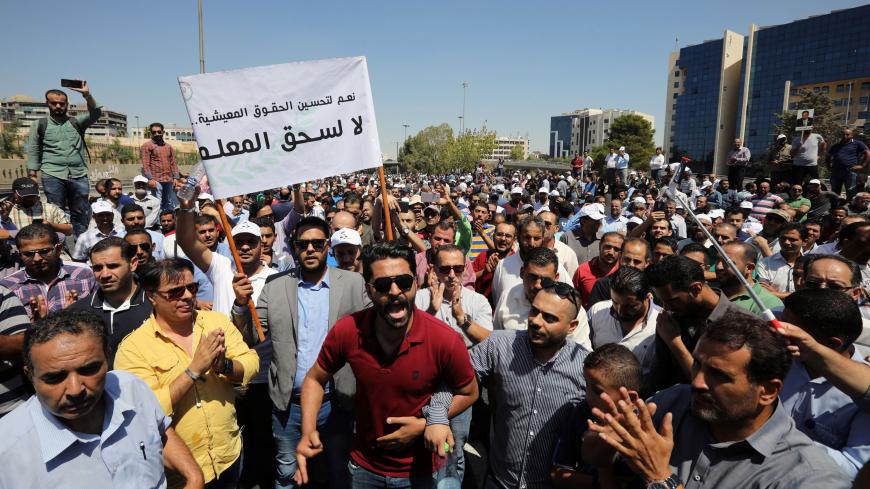 The Jordanian Teachers’ Syndicate and the Jordanian government entered a tug of war after the syndicate announced an open strike Sept. 8, crippling government schools. The strike was the syndicate's response to the prohibition of thousands of its members from protesting in front of the prime minister's office in Amman Sept. 5 to demand a 50% salary increase. Police used tear gas to disperse the crowds and arrested others.

An hourslong meeting between the syndicate and the government at the house of the head of parliament's Education Committee, Ibrahim al-Bodour, failed to produce an agreement between the parties Sept. 9.

The syndicate launched an open strike, demanding a pay increase as well as accountability for the police who attacked protesters. During a Sept. 7 press conference, Jordanian teachers accused security forces of strip-searching them upon arrest. The National Center for Human Rights told Radio al-Balad that it received six complaints from teachers against police officers over the handling of their arrests.

Stability and calm do not seem to be in the cards for Jordan. The government of former Prime Minister Abdullah al-Nosour agreed to the 50% salary increase in 2014. However, successive Jordanian governments stalled in implementing the increase. Minister of Education Walid Maani told Jordanian Roya TV that the pay raise would lead to $157 million in losses at the state treasury. He further stated that the money is not available.

The average salary of a Jordanian teacher is $565 per month. Along with increased prices and taxes over the past 20 years, the teacher's purchasing power has plunged.

Nasser al-Nawasrah, the deputy head of the Teachers' Syndicate, told Al-Monitor, “We were not planning to go on strike until the end of September. We only wanted to protest Sept. 5 in front of the government headquarters to ask for a 50% salary increase to improve the livelihood of teachers. But the government added insult to injury after attacking teachers. We will not give classes until the culprits are punished and Minister of Interior Salameh Hammad steps down.”

Minister of State for Legal Affairs Mubarak Abu Yamin insinuated that the government could disband the syndicate.

Yamin said in a press conference that Article 5 of the Teachers’ Syndicate Law states that the syndicate shall commit to upholding the requirements of the educational process, shall care for students’ interests and refrain from harming their right to education. He threatened to resort to the judiciary.

The Jordanian Teachers’ Syndicate was established in 2011 in the wake of the Arab Spring, following teachers’ protests to improve their tough life conditions. However, the syndicate is legally at risk if the strike persists, and the situation is only escalating.

Nawasrah warned of the dissolution of the syndicate. “Such a step would worsen the crisis, and would put the government in a situation where it has to deal with dozens of teachers’ committees instead of dealing with only one," he said. "The government is not serious about holding a dialogue. The syndicate is open to any suggestions from the government, which still has not proposed any clear solution or contacted the syndicate after the strike.”

Government spokesperson Joumana Ghneimat said in a Sept. 8 press release, “The government addressed the teachers’ issue months ago and held several meetings with the syndicate, which wants the salary increase met before all other considerations. The economy is in recession, and growth is low. Any spending on salaries and benefits would only worsen the deficit and, consequently, the debt.”

The Jordanian government closed vital streets in Amman in the face of the teachers’ protest, preventing the protesters from approaching government headquarters. Thousands of teachers gathered at the busy Ministry of Interior roundabout.

Media reports discussed the government’s concerns over the return of protests, as it feared the recurrence of protests that toppled the government in 2018. Back then, trade unions infuriated by the income tax law and the repeated price hikes led the protests.

Despite the government’s concern, Jordanian trade unions joined the current wave and called for increasing the salaries of their members in the public sector. Ali Abbous, head of the Doctors’ Syndicate, gave the government one week to increase from 30% to 70% the incentives doctors receive in exchange for conducting medical exams on foreign workers in Jordan.

Ahmad al-Zoubi, head of the engineers’ union, called on the government Sept. 7 to pay a 10% increase to the syndicate members in the public sector.

Ehab Salameh, a journalist for Rai al-Youm, told Al-Monitor, “With their escalation, teachers threw the government and themselves perhaps into a quandary. They are in a tug of war, and neither will surrender without common ground and dialogue to reach a suitable understanding. The government is at an impasse. If it agrees to the teachers’ demands, other sectors that believe they are marginalized might follow suit and call for demands of their own.”

During a meeting at Basman Palace Sept. 8, King Abdullah II called for protecting the interests of students at all times. “This is what we should all focus on and reach through responsible dialogue,” he said.

The Teachers’ Syndicate responded to the king’s statements in a press release: “We appreciate the king’s message, and we voice our readiness to sit at any real dialogue table without rules or conditions except our national values and norms.”