The online calls for protests to bring down the regime in Egypt and other calls on social media for protests demanding reforms in Jordan encouraged Jordanian activists to unify their ranks. 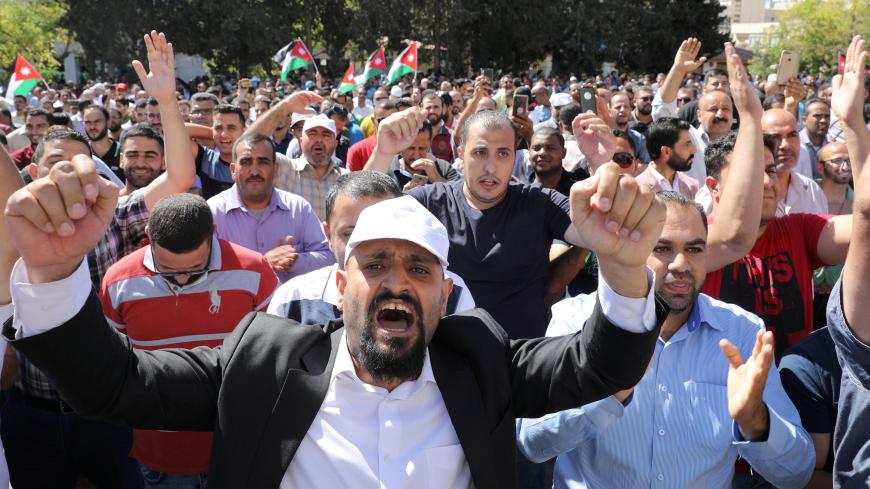 AMMAN, Jordan — An agreement between the Jordanian Teachers Syndicate and government ended a four-week strike on Oct. 5, after the government agreed to raise the teachers' basic salaries between 35% and 60%, depending on their professional grades, from next year.

In light of the Jordanian teachers’ strike that started Sept. 8, Jordanian activists are now focusing on Egypt where Mohamed Ali, a construction contractor and actor, has made a call for mass protests every Friday to bring down the regime of President Abdel Fattah al-Sisi.

The Jordanian activists feel that the popular protests in Egypt could revive their hope for economic and political reforms, based on the idea that freedom is contagious, similarly to what happened in 2011 when they marched the streets following Tunisia's Arab Spring uprising.

Hisham al-Hesah, a Jordanian activist, told Al-Monitor, “The protests in Egypt are a sign to the regimes and peoples indicating that the Arab Spring wave is yet to end, and that the Arab peoples continue to have a thirst for freedom, genuine democracy, for a decent life and countering corruption and despotism.”

He said, “Although what is happening in Egypt is not yet clear, it revives the people’s hope for change and breaking the silence. There is a group of Jordanian activists who seek to reorganize themselves. They set up an executive bureau for the civil movement and are actively advocating for just causes, similarly to those of the striking teachers in Jordan.”

The Jordanians followed up on the developments in Egypt and the calls to bring down Sisi and interacted on social media, considering that change could take place and spread to other countries. Yet the official quarters view that what is going on in Egypt “is an internal Egyptian affair, hoping for stability to be maintained in Egypt,” an official source told Al-Monitor on condition of anonymity.

Alaa al-Fazaa, a Jordanian oppositionist and the first political refugee residing in Sweden since 2013, actively called on Jordanians to rally on Fridays to voice their demands for reforms via Facebook Live.

Speaking to Al-Monitor, he said, "It is not about imitating Mohamed Ali, or about bringing in a new idea from abroad. The idea stems from Jordan. I would like to tell those who fear that the call for protests affect the teachers’ sit-ins not to have any fears, because they are organized and know how to act. These sit-ins will weaken the government’s position and force them to appease the teachers to split up the problems.” [This statement was given prior to the government response.]

The activists tried to reorganize their ranks recently, by launching the Jordanian activists movement executive bureau that consists of 22 activists representing another 800 from the various protest movements in Jordan. On Sept. 4, they released an ethical charter and political document that Al-Monitor secured a copy of.

The protest movement’s charter is designed “to alter the political approach, set out the people’s right to restore its powers and capabilities, and activate its participation in decision-making by well-establishing the constitutional principle that the people are the source of all powers and the separation of powers.”

Jamal Jeet, the spokesman for the executive bureau, told Al-Monitor, “The unification of the Jordanian protest movement in a single entity came one day following the recent arrests of activists.” For him, the teachers’ strike and sit-ins in Jordan and the demonstrations in Egypt stimulated the protest movement in Jordan that supports the teachers’ professional demands, away from any politicization.

He added, “There are contacts with the teachers as a form of support. The government needs to realize the people’s solidarity with the teachers’ strike and the online calls to take to the streets on Fridays. The live videos added another dimension to the Jordanian landscape, similarly to the impact Mohamed Ali’s videos made. We recall that the situation in Egypt back then was reflected in the March 24, 2011, protest [in Jordan].”

Nevertheless, Bassam Badareen, a political analyst and author for Al-Quds Al-Arabi newspaper, told Al-Monitor, “What is happening in Egypt will have a very limited impact on the Jordanian and Arab landscape. Illusioned are those who exaggerate the talks on such an impact. Yet what is happening in Egypt could be worrisome for the Arab regime. However, I think that the Arab street conditions are not ready for another Arab Spring and contagious protests and Arab revolutions.”

The Jordanian teachers were on strike for weeks to stress their professional demands away from any political or partisan agendas. Speaking to Al-Monitor, Nouredddine Nadim, spokesperson for the Jordanian Teachers’ Syndicate, said that “the teachers’ demands are professional, consisting of a 50% raise. Such a matter will not be politicized, [because] we will not let that happen.”

Amer Sabayleh, a political analyst and author, underlined that the teachers’ strike in Jordan is creating the same atmosphere that prevailed prior to the April 1989 uprising. The latter stemmed from the cumulative bad political management and wrong choices, before turning into demands to bring about political and democratic reforms.

He wrote in Raialyoum newspaper Oct. 1, “When they kicked off, the teachers’ sit-ins were limited to pay hikes that are normal demands. Yet they quickly turned into a national landscape whose supporters continue to uniquely increase as part of a new phenomenon inside Jordan.”

The teachers were able to circumvent the Oct. 2 Supreme Administrative Court decision that called on them to halt the strike at once. The syndicate announced Oct. 3 halting the strike and said that another one voicing the same demands would be held Oct. 6

A coherent protest movement is yet to take shape on the ground in Jordan, unlike those in 2011 or the protests that brought down the former government in 2018. Nevertheless, the economic conditions and societal frustration among Jordanians continue to raise concerns. The Jordanians' dissatisfaction with the economic conditions as a result of the yearslong suffering is obvious on social media.