After Amman gives in to striking teachers, more protests could come

Now that the monthlong teachers' strike is finally resolved, the Jordanian government fears other public sector employees may also take to the streets. 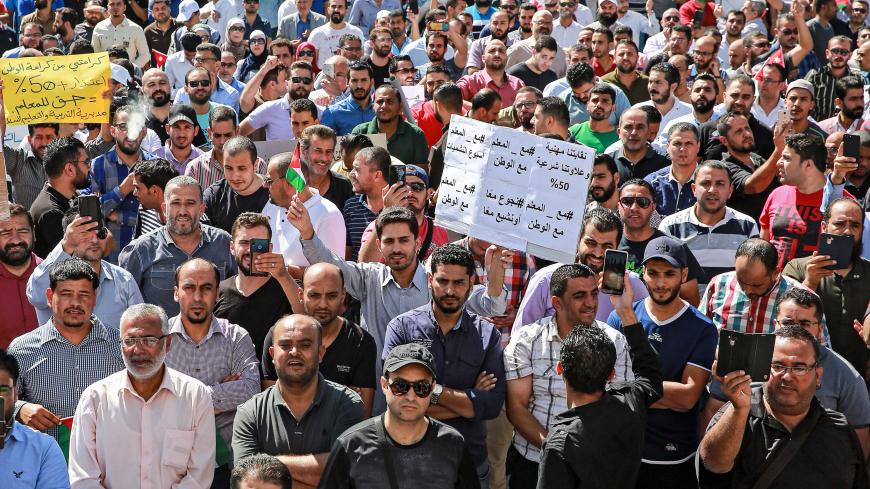 A month-long teachers strike in Jordan ended on Oct. 6. It's seen as a triumph for public sector employees and a defeat for a government that has failed to deliver on its promises of improving the lives of Jordanians. The strike, the longest in Jordan’s history, ended after Prime Minister Omar Razzaz made a public apology for the use of force against protesting teachers on Sept. 5 and later reached a deal with the Jordan Teachers Syndicate that offered a 35% to 70% pay raise for more than 140,000 public school teachers.

A majority of Jordanians stood by the striking teachers even as more than 1.5 million students in the public school system were out of class for almost a month. The crisis underlined the growing discontent with the failure by successive governments to improve the livelihood of hundreds of thousands of public sector employees against a backdrop of rising cost of living, high unemployment and poverty.

It also highlighted the failure by the government, which initially rejected demands to embrace a 50% salary raise, to justify its policy to the public. The syndicate had reached an agreement in 2014 over a raise, but the deal was never executed. The latest agreement will go into effect in January next year.

After finally succumbing to the syndicate’s demands, the government now fears that other public sector employees may soon make similar ones. The government had claimed that the raise teachers were demanding would cost the state budget about 150 million Jordanian dinars annually ($211 million) and that it had no means to fund the raise. It later asked the Finance Ministry to seek additional loans to cover the deficit. As the government made these claims, it also announced that it was adhering to a royal directive to increase the salaries of retired army personnel by 25 million Jordanian dinars ($35 million) with immediate effect.

When thousands of teachers tried to stage a protest in front of the Prime Ministry on Sept. 5, police used force to disperse them and made a number of arrests. The syndicate complained that a number of those arrested were strip-searched and humiliated. When the syndicate responded with an open-ended strike, the government’s initial reaction was to reject the teachers’ demands, which included a public apology, outright. Then as the strike entered its second week, the government attempted to negotiate a deal that the teachers deemed insulting.

When an administrative court ruled on Sept. 29 that the strike was illegal, the syndicate said that it would appeal but suspend its strike for two days, giving the government an opportunity to negotiate. Fearing a resumption of the strike, the government finally caved and a deal was reached.

Former Deputy Foreign Minister Marwan Muasher wrote in Al-Ghad Oct. 8 that the strike pointed to the absence of “genuine leadership whose legitimacy is based on peoples’ support and that is capable of dealing with a series of crises that are taking the country by storm.” He added that top-down leadership has led to a government of executives who have no grassroots support.

“Resorting to security methods no longer works and the executive authority should realize that after 2011, using force no longer works. And now that the rentier state has ended, we need to manage our resources in a different way and develop our institutions so that citizens feel they are part of the decision-making process,” Muasher said.

Pundits here believe that the teachers strike is only the tip of the iceberg and that the country should brace itself for economically driven unrest. Writing in Addustour Oct. 8, business editor Salameh Dar’awi predicted that economically driven protests will increase in the absence of economic justice. He added that those working in the public sector and whose salaries do not exceed 500 Jordanian dinars ($700) monthly make up more than 85% of the total number of workers in the civil and military sectors.

Dar’awi added that since promised political reforms have not been carried out, protests will now focus on economic demands, as the austerity policy adopted by successive governments has only made Jordanians poorer. “Three decades of an economic correction program under the IMF have failed to deliver and we can expect dire consequences for the treasury next year as more sectors in society will move to make economic demands,” he concluded.