Egyptian coal factory shuts down in lead-up to COP27

El-Nasr Company for Coke and Chemicals was liquidated recently, less than a year after another industry and steel company was closed down, as the Egyptian government seeks to abandon coal in its factories and rely more on clean energy. 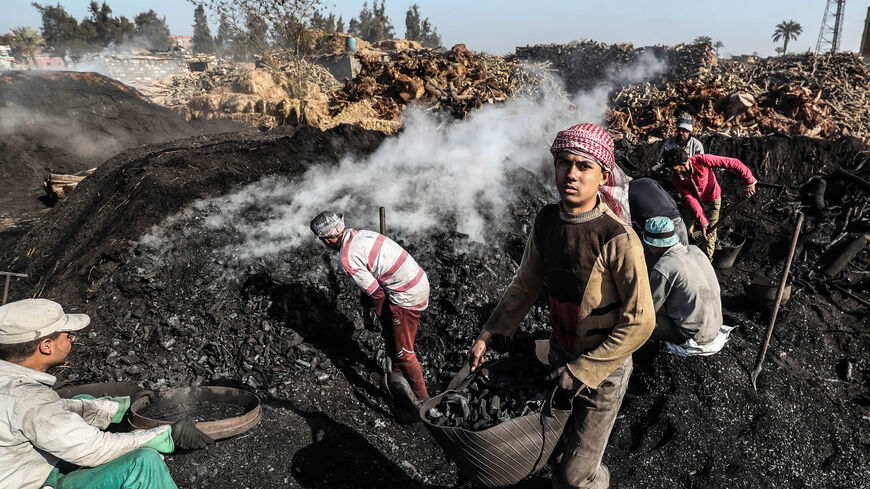 CAIRO — After 62 years of production, the extraordinary general assembly of the state-owned El-Nasr Company for Coke and Chemicals approved Sept. 5 the dissolution and liquidation of the company, a year after its activities came to a halt in August 2021.

The liquidation move came following reports by the Egyptian Environmental Affairs Agency that the company’s environmental conditions violate the law.

The Egyptian government is currently working on a plan to liquidate and close factories that pollute the environment and reduce emissions in the lead-up to the Conference of the Parties to the United Nations Convention on Climate Change (COP27), which Egypt will host in Sharm el-Sheikh in November.

The decision to close El-Nasr Company for Coke and Chemicals comes less than a year after the liquidation of the Helwan-based Iron and Steel Company, affiliated with the Metallurgical Industries Holding Company, Egypt’s industry giant, as a result of losses and debts amounting to $540 million.

Also, the Ministry of Environment had registered numerous violations on the part of the Iron and Steel Company, causing industrial pollution.

Speaking at an environment-related event in Cairo in June, Hisham Tawfiq, former minister of public business sector, said, “The state is making efforts to close polluting factories, such as cement and iron factories, and have them operate on green sources of energy, all the while creating a healthy and environmental climate in the industries and companies of the public business sector.”

Ahead of its closure, El-Nasr Company for Coke and Chemicals was unable to import coal due to the failure to obtain approvals from the Ministry of Environment, which had set strict conditions to regulate the procedures for importing and trading hard, petroleum and vegetable coal.

As per the amended Executive Regulations 964/2015 of Environment Law No. 4 of 1994, “The Egyptian Environmental Affairs Agency should approve the import, trade or use of coal based on an environmental impact assessment study it shall receive.”

Hisham Issa, expert in environmental sciences and climate change and member of the Union of Arab Environmental Experts, told Al-Monitor, “Since the beginning of the 1990s, Egypt has taken serious steps in the field of combating industrial air and water pollution through the Egyptian Pollution Abatement Program.”

He said, “The Egyptian government also made amendments in 2009 to Environment Law No. 4 of 1994 by adding articles about polluting companies. Under the law, a set of metrics for industrial pollution and technology were put together to link major industrial companies, namely in the petroleum sector, with the Ministry of Environment in order to monitor daily emissions.”

Issa noted, “The coal issue has faced many developments since 2011, as the state was suffering from a severe energy crisis and a lack of natural gas supplies for production in major sectors, energy production and the operation of fertilizer companies. The state thus sought to solve the energy problem and secure power supply to the industrial sector. This is why energy-intensive companies were allowed to reduce their dependence on gas, and gas was instead provided to the electricity sector. This prompted cement factories, being the most in need of gas, to rely on coal. These were temporary and inevitable solutions.”

He added, “With the recent natural gas discoveries, Egypt did not need to resort to coal again, as it started to rely on less polluting energy sources.”

Issa explained, “It is good to participate in international efforts to reduce emissions, but this should not affect development ambitions, especially considering that Egypt’s share of global emissions is very limited.”

The Cabinet had issued a decision in 2014 allowing the use of coal in the cement industry after reducing the supply of natural gas to energy-intensive factories. Also, in 2015, decisions regulating the use, storage and circulation of coal were issued.

Egypt does not have a large share of coal in its mineral wealth reserves, as there are no coal-producing mines in the country except for El-Maghara coal mine in the northern Sinai Peninsula, which was discovered in 1958. The exploitation of this mine started in 1967, and the size of its exploitable reserves amount to 34 million tons. However, its operation faces many problems, chief among which is the size of indebtedness.

As part of the Ministry of Environment’s campaign to confront air pollution, some governorates started banning the operation of charcoal kilns until the end of November, and the General Authority for Industrial Development was tasked with monitoring industrial facilities polluting the environment.

To gradually abandon coal, the Egyptian government had also put together an ambitious plan in the electricity sector to expand the production of energy from sustainable and environmentally friendly sources, including new and renewable wind and sun energy, enhance the energy of hydroelectric stations, generate energy from human movement and shift toward green hydrogen.

Ahmed Mohamed Muhaina, head of the strategic planning and electrical performance follow-up sector at the Ministry of Electricity, told Al-Monitor, “Egypt has completely excluded coal from any plans to produce electricity, and it is a plausible decision on the part of the Egyptian government. The plan has garnered the support of international energy and climate change institutions.”

Muhaina explained, “The Ministry of Electricity’s plans go in line with the global trend in reducing emissions, but the greatest target is the optimal use of the available Egyptian resources and capabilities, as the country has great wind and sun resources with great economic feasibility and a competitive price — but storage remains a major challenge. If innovative ways are found to store energy produced from wind and the sun, it will be a greater incentive to expand the exploitation of such energy."

Despite the stringent measures that the Egyptian government began implementing to abandon the use of coal as a source of energy, official figures by the Central Agency for Public Mobilization and Statistics (CAPMAS) showed an increase in Egypt’s coal imports by 155% between June 2021 and June 2022.

Coal is currently among the eight main commodities imported by Egypt, including wheat, corn, meat, fish and petroleum derivatives. The value of coal imports amounted to $81.9 million, compared to $32.1 million year over year, according to CAPMAS.

The government plan to ditch coal in Egypt remains mainly contingent on the availability of alternative sources of energy for coal-based industries, as well as on firm decisions to close huge coal-based factories. All this comes as part of the government’s attempt to serve as a leading example in Africa and the Middle East to protect the environment from polluting sources, especially with Cairo’s hosting of the COP27 on behalf of the African continent.