Egypt aims to produce 20% of power from renewables by 2020

Egypt has conducted feasibility studies for the construction of solar power plants that could not only help cover its energy needs, but become an exportable commodity. 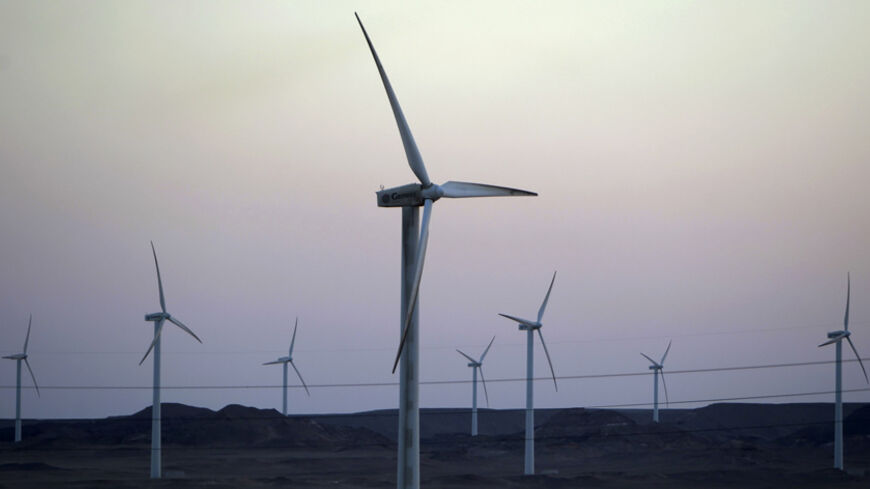 CAIRO — In an attempt to escape the energy crisis triggered by frequent power cuts, lack of fuel and the deterioration of national networks and power stations, the Egyptian government has signaled its intent to expand the use of new and renewable energy, notably solar energy. Despite the enormous potential, it’s still a daunting prospect because of the level of investment required to expand in solar energy, especially in light of the continuing deficit in the state budget.

In September, Prime Minister Ibrahim Mehleb held a number of intensive meetings with Minister of Electricity and Energy Mohamed Shaker and other parties involved in the energy sector in Egypt to discuss the implementation of a long-term renewable energy strategy. The government confirmed in several press releases — copies of which were obtained by Al-Monitor — that there is no better way to get Egypt out of the energy crisis that doesn’t rely on natural gas or diesel fuel to run power plants.

On Sept. 20, Shaker announced a special tariff for the purchase of new solar and wind energy produced by private companies, following more than five years of delay, in an attempt to encourage the private sector to produce renewable energy and allocate it for domestic and commercial uses, provided government buildings are the first beneficiaries. The state funds part of these projects through soft loans from the Ministry of Finance with a 4% interest rate.

In a statement to Al-Monitor, the spokesman for the minister of electricity and energy, Mohammed al-Yamani, said, “The government's plan aims at producing 20% of Egypt’s energy from renewable energy sources, 12% of which will be wind energy, by 2020.” Egypt’s renewable energy output is currently 1% of its total energy supply, Yamani said.

“The current projects to generate solar energy are small projects to light government buildings and some university buildings,” Yamani added.

Investors in the energy fields complain of difficulty in pursuing any project in this field, but Shaker stressed, “We eased regulatory procedures to encourage investment and facilitate the process of obtaining construction permits for power plants using renewable energy.

“The government received bids from local and international private companies for the implementation of 20 projects for the production of solar energy at a cost of $30 billion, which will add 20,000 megawatts to the electricity grid in just two years,” he said.

The Renewable Energy Authority with the Ministry of Electricity finished feasibility studies for solar power plants operating on solar cells in the Kom Ombo region in the province of Aswan and in Hurghada city and hope to establish them by 2017. These come in addition to the thermal stations set up by the Ministry of Electricity, such as the Kuraymat solar-thermal power plant as well as another power plant to be established in Aswan, still under review.

Despite the enthusiasm within the government to accelerate the implementation of such facilities, the state's legal authorities and legislative committees are still reviewing investment contracts and licenses so that the power plants are built and lands are appropriately leased for a determined period.

To benefit from recent government measures to promote the use of solar energy, owners of private companies are calling on the government to remove the contract and licensing obstacles that have delayed the expansion of solar energy projects in Egypt.

Samir Sobhi, the chairman of the board of directors of the Egyptian Solar Energy Systems Company, told Al-Monitor, “The recent government decisions to set a tariff for renewable solar and wind energy constituted the main drive and incentive for companies to work in this field. Prior to this decision, there were major delays in the solar energy market.”

Sobhi called the state to quickly address the remaining procedures that may impede the private sector from investing in the production of electricity from renewable sources, saying, “The state’s current action in this respect has become a national objective … and not a luxury.”

Sobhi, whose company produces 500 kilowatts per day of solar energy and adds them to the electricity grid in the Nasr City district, said, “Our experiments and studies confirm the great success of these projects, especially since Egypt is located in the 'sun belt' zone, which gives it more opportunities for expansion in solar energy production than European countries.”

In a statement to Al-Monitor, Khaled Abu Bakr, the chairman of the board of directors of Taqa Arabia, said, “Encouraging the private sector to support the state’s renewable energy plan requires the establishment of legislative frameworks and tax regulation, so as to reassure investors to invest intensively in a basic structure of projects that could generate profits in time.”

Abu Bakr believes the reform of the energy sector in Egypt may lead to further investments that support the economic situation of the state. “According to studies, we need at least 3,000 megawatts of solar energy, but the state is still in an awkward and difficult position due to significant challenges impeding the provision of these needs,” he said.

Cairo is trying to re-promote the Desertec solar energy project linking North Africa, the Arab Mediterranean region and the rest of the European continent to attract global investment for the production and exportation of renewable energy from Egypt.

The Desertec Foundation's report, "Clean Energy from the Desert," examines the energy crisis in Egypt following high rates of population growth, increasing energy demand and the lack of potential for the production of electricity from conventional sources based on petroleum products. It also cites another problem: Cairo’s inability to expand the power output from the Aswan High Dam following clear threats to its water share from the Nile River. The report states that there is no alternative but to expand in solar energy, abundantly available in the deserts of western and eastern Egypt.

The report affirms the possibility of full economic dependence on energy produced from renewable sources and finds that if exported, this energy may become a source of income for Egypt.

The government's attempts to promote the use of solar energy are hindered by the possibility of legislation that balances meeting the growing internal demand for energy and attracting investors by offering incentives. The search for alternative sources of energy has become the only way to end the current impasse and avoid popular opposition that arose after the government allowed cement companies to burn coal for power.

by Murielle KASPRZAK and Joseph SCHMID | AFP | May 26, 2022
END_OF_DOCUMENT_TOKEN_TO_BE_REPLACED