How solar energy is sparking new business in Egypt

Egypt, which currently gets 90% of its energy from fossil fuels, is trying to take advantage of its plentiful sunshine through solar power. 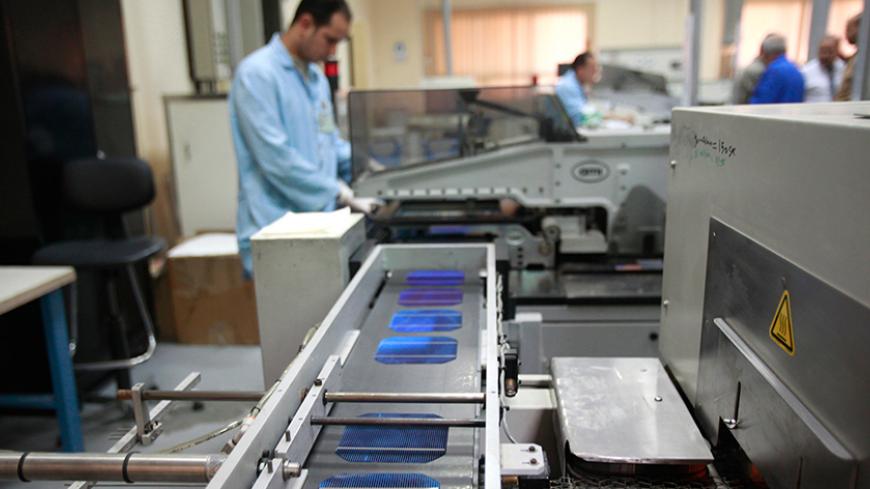 An employee is seen on the production line of a solar energy factory on the outskirts of Cairo, Nov. 17, 2011. - REUTERS/Asmaa Waguih 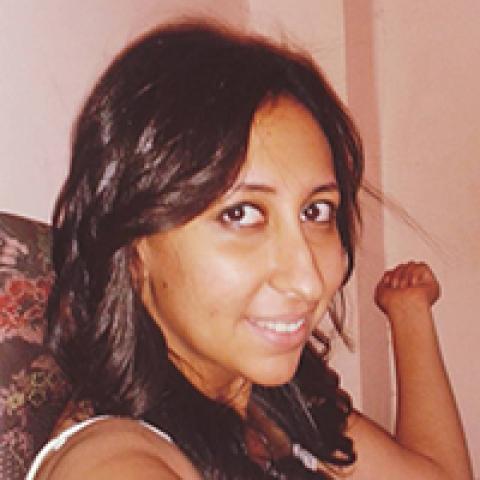 CAIRO — Egypt hopes renewable power will cut its reliance on fossil fuel imports and solve some of its energy and economic problems. The entrepreneurial co-founders of a solar startup company want to help.

The country wants to get 20% of its energy from renewable sources by 2022, according to the Ministry of Electricity and Renewable Energy.

Al-Monitor sat down with the co-founders of SolarizEgypt, a company that designs, installs and commissions photovoltaic solar power systems, to learn about the firm and the industry. Yaseen Abdel-Ghaffar is managing director of the Cairo business, while Rana Alaa is technical director.

Solar energy is evolving into a malleable new technology that accommodates a variety of needs, Abdel-Ghaffar explained.

Solar cells concentrate light to generate heat. There are two kinds of photovoltaic cell systems: grid-connected and off-grid. Under the former type, users install solar cells that are connected to the government’s power grid. The cells provide consumers with energy, but when they need more power, or at night, they can pull energy from the national power grid, Abdel-Ghaffar said.

“The whole idea is that it provides cost savings as long as there is sun,” he added.

Off-grid systems use a battery to store energy during the day and provide energy when sunlight is not available.

Grid-connected systems are more expensive to install. However, while off-grid systems are cheaper initially, they require batteries that are costly and must be replaced regularly.

SolarizEgypt’s young entrepreneurs, both graduates of the American University in Cairo, said they chose a solar energy startup because Egypt has been on an economic and political roller coaster. Both partners pursued technical subjects in their graduate studies and both worked in the oil and gas sector. They have always been passionate about the environment, and Alaa got her master’s degree in environmental engineering.

Solar energy was a no-brainer to them: Egypt has a lot of sun and a lot of power outages, so why not?

“We hated seeing Egypt’s resources go to waste and realized that if there was anything to be done, we needed to do it now, ourselves,” Abdel-Ghaffar said. “We really believe in the business model and technology.”

When asked what challenges the business has faced so far, he cited government bureaucracy. “We were basically waiting for the government to let us do our job.”

Also, because SolarizEgypt must import panels and materials from abroad, it has been difficult to set a budget. And it can be hard to sell the concept of solar power to the public without having a working prototype, Abdel-Ghaffar said.

“We come up with a lot of proposals with a hit rate of 1-2%, but we spend most of our time spreading awareness of the topic rather than closing deals because people are still reluctant to change,” Alaa added.

Al-Monitor asked why the government would encourage people to install solar panels, knowing it would lose customers.

Alaa explained, “It costs the government more money to supply your electricity because it is heavily subsidized. That is why there is a feed-in tariff incentive program in place, to push people to get acquainted with the idea of solar.”

The feed-in tariff provides renewable energy producers with long-term contracts at guaranteed prices as an incentive to kick-start such projects. Also, investors know electricity consumption is bound to rise as the population increases and development continues — especially since 90% of Egypt’s energy currently comes from fossil fuels.

SolarizEgypt has handled 18 business-to-consumer projects so far and is getting requests for a lot more, the partners said. In such cases, consumers can put their idle rooftops to use providing solar energy for their own homes while also contributing kilowatt-hours to the grid. They are selling electricity to the government, but the government still saves money in the exchange.

The real cost of a kilowatt-hour is around 20 cents when all subsidies are removed from the equation. If the government pays solar-panel consumers 12 cents per kilowatt-hour, for example, it saves a substantial amount. And the process helps the government keep up with demand.

Ministry of Electricity and Renewable Energy spokesman Mohamed Soliman al-Yamany told Al-Monitor, “Our main goal is to eliminate all power outages. Bearing in mind energy subsidies are to be lifted, we are working toward managing our power resources without negatively impacting Egyptian citizens.”

Until now, SolarizEgypt has successfully handled relatively small projects. Larger projects present a challenge because of Egypt’s cap on the amount of US dollars that can be deposited in its banks. “Some of our customers are willing to pay us in US dollars and receive their revenues in the same currency, but since I cannot deposit more than $50,000 per month, it seems like a handicap,” Abdel-Ghaffar said.

In 2012, Egypt’s oil bill reached $16 billion. Abdel-Ghaffar said the country is using most of its natural gas to supply electricity. Solar power eventually would fill almost half of that need for natural gas, he said.

Otherwise, “It’s like instead of burning firewood to get warm, you’re burning your money.”