For the first time, the United Solar Challenge was held in Egypt as innovators and engineers race solar-powered cars and try to spark interest in renewable energy sources. 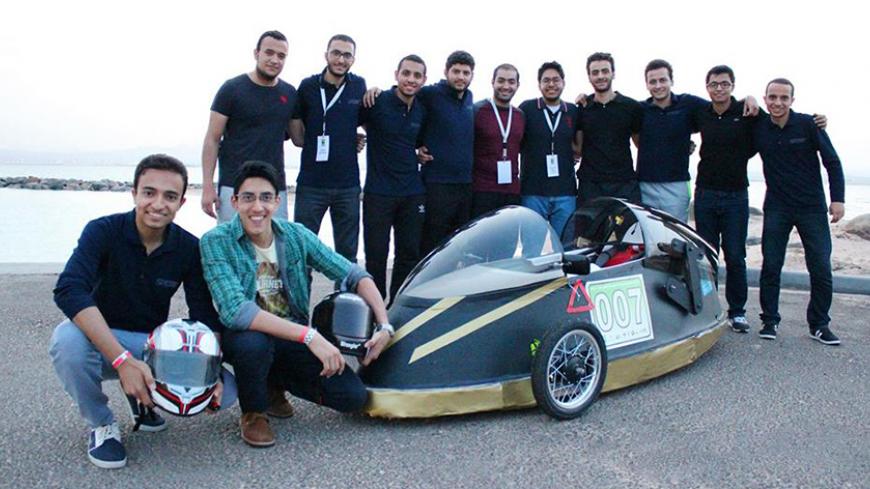 Members of the Zuweil City Solar Car Team and their car at the Global Hybrid-Electric Challenge, Soma Bay, Egypt. Posted May 6, 2016. - Facebook/ZcSolarCar

Drivers were racing solar-powered cars this week in Egypt's resort town of Hurghada, opening new horizons for future engineers in the country and enhancing their interest in science, technology and the use of renewable energy sources.

The United Solar Challenge (USC) — held March 19-22 for the first time in Egypt and for the second time in the Middle East — saw 12 teams from all across the world experience the ultimate challenge of an exciting experience using the sun as the only fuel.

The solar cars — with panels that absorb only sunlight to power their engines — crossed the streets of Hurghada's Soma Bay, giving the city a new taste of environmental sustainability.

Organizers and contestants said they aspired to convey the message that environmentally friendly technology is the future of a green planet. Organizers included the International Solarcar Foundation, the Global Education Energy Environment (EEE), and some nonprofit organizations supporting renewable energy projects like the Sharaf Foundation for Sustainable Development and Hadath for Innovation and Entrepreneurship.

The USC is a cross-country solar car competition held every two years in the Middle East and North Africa. The first USC was held in the United Arab Emirates in January 2015, and the first-place winner was the University of Michigan Solar Car Team in partnership with Abu Dhabi University.

The USC coincided this year with the 2017 Global Hybrid-Electric Challenge in Egypt. Prequalifying was held March 14-16 through a number of static and dynamic scrutineering and qualifying sessions, with the cars competing head-to-head for pole position on the final day of qualifications.

"Continuing to rely on oil and gas to operate various means of transportation is environmentally unsustainable," said Essam Sharaf, the head of the Sharaf Foundation for Sustainable Development, one of the organizers and a nonprofit organization aiming to support renewable energy projects in Egypt.

"It is necessary to start depending on innovative solutions and begin utilizing renewable energy in the transport system," he noted.

Sharaf also said that solar car racing can be a step in the way of replacing oil and gas with new and renewable energy in Egypt's transportation system.

He added that the event was a "good opportunity" for participating Egyptian teams to exchange expertise on manufacturing solar-powered cars with other teams from other countries around the world.

Ahmed Nasr, a student at the Zuweil City of Science and Technology — which took part in the competition — said that he and his team learned from the Japanese team participating in the event how to manufacture, repair and operate solar cars.

"The event was a very fruitful experience for us, because getting acquainted with international models in manufacturing solar-powered cars helps us in our project [currently underway]," Nasr told Al-Monitor.

Nasr said that he and his team are working on building a solar-powered car and expect to finish the project by June. The Egyptian team is due to take part in this year's World Solar Challenge to be held in Australia in October.

The 21-year-old student said the idea of replacing oil and gas in transportation with renewable energy sources can be turned into reality in Egypt because the country has one of the main factors: the sun.

"The government just needs to study the idea very well before putting it into effect," he added.

The organization of the competition in Cairo came under fire from observers as the race was postponed for two days. The competition was scheduled to take place on March 17-21. Cars were supposed to start and finish at the beautiful Soma Bay Red Sea resort on the first four days and end in Cairo on the fifth and final day. On their finish in Cairo, the cars were also supposed to parade in finishing order to the ancient Pyramids at the Giza Plateau. But the organizers failed to provide necessary papers and required documents for Egyptian authorities.

Despite poor organization, Sharaf said that just holding such a competition in Egypt delivers a message that the country is interested in switching to renewable energy.

He said that events like this can attract foreign investments to the country, especially in the field of renewable energy.

Egypt’s appetite for new energy appeared during a 2015 major economic conference held in Sharm el-Sheikh. During the conference, Egypt offered local and foreign investors dozens of renewable energy projects that it plans to carry out in the coming years.

The government also announced its plans to cut reliance on natural gas and fuel oil from 90% to 62% by 2020.

The initial call attracted bids for more than double the capacity sought, suggesting wide interest from the private sector. The government's moves have also gained approval from international observers.