Egypt to begin project to convert sand into solar panels

Egypt signed with a Chinese company a cooperation protocol to locally manufacture sand-to-cell photovoltaic solar panels, in the first such project in the region. 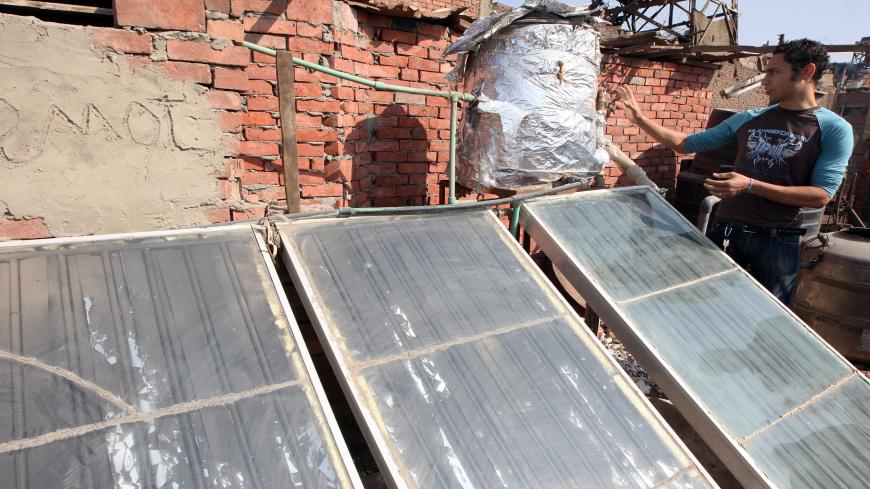 Hanna Fathy, an advocate of a biogas project in Egypt, inspects a solar panel installation on his rooftop in Cairo, Egypt, Nov. 20, 2009. - Cris Bouroncle/AFP via Getty Images

The Egypt-based Enara group for renewable energy services signed on Dec. 28, 2020, a cooperation protocol with the Chinese Chint energy company to establish a project aimed at locally manufacturing solar panels from silica-rich sand — a first in Egypt.

Mohammad Adel, project development manager at Enara, told Al-Monitor over the phone that cooperation with the Chinese company will mark a quantum leap in the field of solar energy in Egypt, considering that the company has great experience in this field and has already installed three solar energy stations in the Benban solar power complex in Aswan governorate.

Adel said that the Enara group is seeking to boost local manufacturing, localize modern technology and exchange global experiences in the fields of energy and agriculture by using new and renewable energy sources. He said the group is also seeking the government’s contribution in its development plan to boost the Egyptian economy.

The project, he explained, will achieve a major breakthrough in the field of solar energy generation and is a first in Egypt.

Enara signed a cooperation protocol on Jan. 25 with the National Organization for Military Production (NOMP), affiliated with the Ministry of Military Production, and the Nasser Social Bank with the aim of funding small clients and prompting them to use solar energy in the agricultural sector.

The Nasser Social Bank is contracted with the Ministry of Social Solidarity to fund the small projects approved by the ministry.

Sherif el-Gabaly, chairman of the board of directors of Enara, told Al-Monitor over the phone that he was happy about the fruitful cooperation with the Ministry of Military Production and the Ministry of Social Solidarity, as it would benefit the agricultural sector in Egypt.

Gabaly said that one of the most important current goals of the Enara group was the generation and distribution of electricity to the agricultural sector, especially considering that it represents one of the most important sources of national income and is responsible for achieving food security, meeting local needs of food commodities, diversifying production and maximizing the added value of agricultural production.

He noted that Enara, in cooperation with Chint, will work to start implementing the national project in coordination with the Ministry of Military Production.

Gabaly explained that the company’s projects include investments in the infrastructure and renewable energy sectors, and pointed out that it obtained a loan of $200 million from several international financial and financing institutions, as it cooperates with the European Bank for Reconstruction and Development, the African Development Bank and the World Bank.

Minister of State for Military Production Mohammed Ahmed Morsi said during the signing of the protocol with the NOMP and the Nasser Social Bank that the agreement aims at benefiting from the energy overcapacity in the Ministry of Military Production units and subsidiary companies in order to implement national development and service projects for various ministries and agencies in the country to ultimately serve citizens.

He pointed out that the protocol aims at exploiting the partnership between the NOMP and Enara as a consortium with the aim of implementing and equipping water wells to be fueled by solar energy through the military production companies supplying the necessary equipment for solar energy systems such as solar panels and stabilizers.

Morsi added that Enara handles the designs, installations and supplies related to the solar energy systems.

In a statement issued on Jan. 25 by the Ministry of Solidarity on its website, Morsi explained that the mission of the consortium under this protocol is to provide an integrated technical and financial offer to small and medium investors in the agricultural sector in order to invest in the use of solar energy in the agricultural sector by operating water pumps using solar energy instead of diesel and other fuels.

He indicated that the project aims at selling, supplying, installing and operating 1,000 wells as a start to provide a source of electricity that is economically, environmentally and socially feasible.

Asked about the funding of projects undertaken by young investors, Mohammad Ashmawy, chairman of the board of directors at Nasser Social Bank, told Al-Monitor that the bank will fund small and medium-sized projects for solar energy irrigation systems provided that the funding is paid to the consortium that includes the NOMP and Enara. The funding will allow the consortium to implement the investors’ projects in terms of design, supply, installation and operation contracts of solar-powered irrigation systems.

Energy projects in Egypt have come to represent a great priority in recent years in terms of filling the electric power generation deficit. Over the past years, the government has worked to exploit natural resources to generate electric energy, especially solar energy, as many projects were opened in several regions of the governorates of the country.

In November 2020, the Egyptian Minister of Electricity and Renewable Energy Mohamed Shaker said during the International Conference of the Institute of National Planning — titled “Energy and Sustainable Development” — that Egypt’s electricity production has doubled since 2014, bringing the total electricity production by the end of 2019 to 28,000 megawatts (MW).

Shaker noted that Egypt is encouraging the private sector to participate in the production of renewable energy, be it through solar power or wind power electricity generation projects.

He gave the example of the Benban solar power complex, the largest solar energy project in the world, which is being implemented in partnership with the private sector.

The complex, located 30 kilometers (19 miles) north of Aswan city in Upper Egypt, includes 32 solar power plants with a production capacity of 1,465 MW, i.e., about 90% of the Aswan High Dam’s total production capacity. The complex covers an area of 37 square kilometers (14 miles) where the sun shines throughout the year. The $2.4 billion project is being carried out by 39 specialized companies.

Mohammad Saad el-Din, head of the Energy Committee at the Federation of Egyptian Industries, told Al-Monitor that Egypt’s plan for the coming period aims at optimally utilizing solar energy especially in light of large untapped areas in the country where such projects could be implemented.

He said that Egypt is seeking to reach 20% of renewable energy in electricity uses by 2030.

Saad el-Din emphasized that solar energy is not linked to oil prices, nor is it affected by the occurrence of tensions or conflicts in the region, which makes it a safe source of energy.

He explained that Egypt consumes about 26 gigawatts (GW) per year and has a surplus of 6-8 GW, and interconnection power lines with Saudi Arabia and Sudan are currently being built to invest such surplus.