Iraq is signing contracts with international companies to produce clean energy in a bid to curb its rising pollution curve. 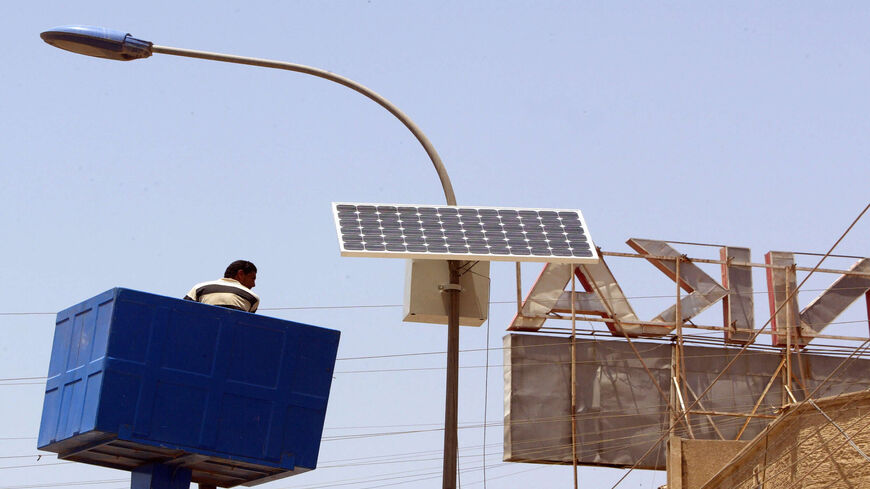 A municipal worker is lowered after adjusting a solar panel attached to the top of an electricity pylon along the central isle of a main road in Karada district, Baghdad, Iraq, May 24, 2008. - Sabah Arar/AFP via Getty Images

Iraq’s projects to develop 7.5 gigawatts (GW) of renewable power before 2023 in line with the Ministerial Energy Council decision are on the right track. This was confirmed in a statement by Iraqi Oil Minister Ihsan Abdul Jabbar Ismail broadcast Oct. 3 on SkyNews Arabia.

The projects are part of a reform plan in the energy system, aimed to generate 63% of electricity from clean energy within five years, Ministry of Electricity spokesman Ahmed Moussa said Oct. 23.

So far, the Iraqi government has concluded contracts with a group of international companies specialized in clean energy to establish power stations with a capacity of 3.5 GW, as part of a plan to produce 12 GW.

Most recently, Iraq inked with Abu Dhabi's state-owned Masdar a contract to develop solar photovoltaic projects of a combined capacity of 1 GW. The first stage of these projects is being implemented now. They include a 450 megawatt (MW) plant in Dhi Qar, a 350 MW plant in Anbar, a 100 MW plant in Ninevah and another 100 MW plant in Maysan. The Iraqi government also signed a contract with French oil company TotalEnergies for building a 1 GW solar plant in the Basra region. This is in addition to an agreement with a consortium led by Norway’s Scatec to build a 525 MW solar project consisting of a 300 MW plant in Karbala and a 225 MW plant in Babylon, at the cost of 3.6 cents per kilowatt hour (kWh).

The first solar-powered plant to be added to the national power generation system is the Total 1 GW plant. This is expected at the end of next year. The other solar power plants are to be added gradually in 2023.

Ismail, who is also head of the Ministerial Energy Council, said Iraq has several programs for the transition toward clean energy. “We have so far signed three contracts for the establishment of solar-powered electric stations,” he noted.

He pointed out that Iraq has so far implemented 40% of the program to establish renewable energy projects, stressing his country’s abidance by environmental emission limits in order to reduce emissions and pollution.

Iraq suffers a great electric power shortage. It generates less than 21,000 MW while it needs 30,000 MW. This is in addition to a shortage in gas that operates power stations. Iraq needs $15 billion annually to attain electricity self-sufficiency, and the country's revenues cannot meet the electricity sector’s requirements in light of the public sector's high expenditures.

Iraq has not attempted to establish any clean energy electric stations during the past years. Its current efforts follow its accession to the Paris Climate Agreement to reduce greenhouse emissions at the beginning of this year.

The shift to solar energy in Iraq does not come without problems that require specialized studies. For example, the country’s dilapidated electrical system is unable to withstand the fluctuation of energy production. This is in addition to the drop in thermal efficiency with the increase of temperatures.

It should be noted, however, that Iraq enjoys very high irradiation levels, estimated at more than 1,899 kWh per square meter (roughly 11 square feet).

Consequently, it is necessary to have a regular and reliable transmission and distribution network to enable solar power stations to operate regularly and without problems.

The other challenge is that previous successive governments' plans have all focused on production, while disregarding distribution, transportation and fees collection.

Iraq's shift toward clean energy can add to the country's budget more than $5 billion annually from the exploitation of crude oil, which can operate electrical stations and end gas imports from Iran.

The Iraqi government seems to be moving toward connecting its electricity with the Gulf countries, Turkey and Jordan in order to end Iran’s monopoly. The country has been importing 5 million cubic meters a day from Tehran at a price higher than the global price, at a cost of around $8 per million British thermal unit. Also, the Electricity Ministry uses crude oil for electricity generation, as it spends 200,000 barrels per day, which brings expenditures to more than $5 billion annually.

Iraq is highly ranked on the environmental pollution scale. This is due to the increase in oil production and gas burning, the increase in the number of cars and private generators, in addition to the vast desertification. This has resulted in a major crisis that has led to thousands of new cancer cases annually. To make things worse, the temperature rose above 50 degrees Celsius (122 degrees Fahrenheit) this past summer.

In a bid to address the crisis, the government of Mustafa al-Kadhimi brought back the Ministry of Environment; former Prime Minister Haider al-Abadi had merged it with the Ministry of Health.

In a parallel development, the Central Bank of Iraq launched a lending initiative through banks to encourage citizens to install solar panels in their homes and residential complexes, to generate electricity, curb heat emissions and reduce the number of private generators scattered throughout residential neighborhoods.

In this same vein, the Iraqi government announced Sept. 22 the start of the shift toward alternative energy and reliance on green economy, by forming a high-level committee, based on the Paris Climate Agreement and aimed to reduce pollution.

Minister of Environment Jassem al-Falahi said that Iraq has 10 months of sunshine that can be used to generate electricity for citizens, through solar panels established by the government or citizens. He noted that clean energy prices have begun to gradually drop as a result of development and increased competition between companies.

He urged Iraqi state departments and schools to use clean energy to generate electricity, which contributes to alleviating the load on the electricity system, and gradually reduce the use of fossil fuels. “Iraq can use international funds to finance and expand clean energy projects,” he said.

It seems that the shift toward clean energy to generate electricity has become a general trend among citizens in Iraq. On the ground, however, prices for such energy are still high. This requires the government to reduce or lift customs taxes on clean energy materials to lower their prices and make them available to everyone.