Iraq is investing in clean energy to produce electricity, especially solar energy, which is almost available throughout the year in various regions of the country. 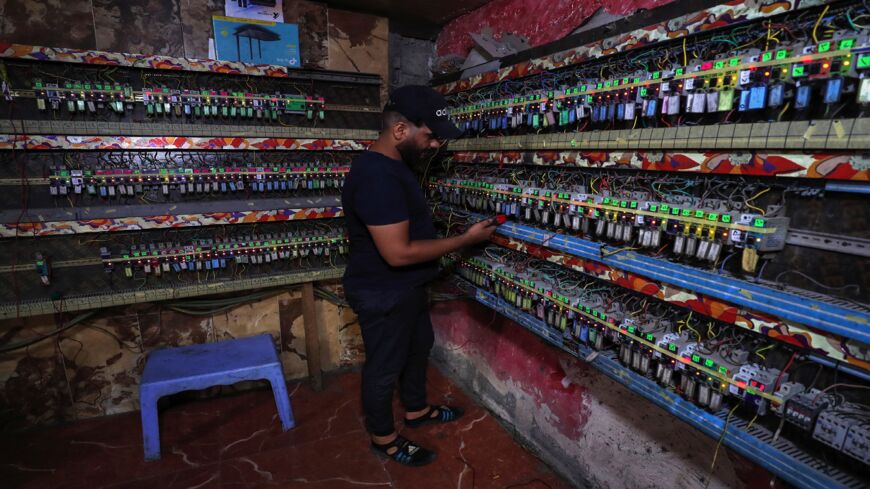 An Iraqi man works at a generator subscription distribution room in Sadr City, east of the capital, Baghdad, on July 2, 2021. - AHMAD AL-RUBAYE/AFP via Getty Images

Iraq signed on June 24 a deal with Abu Dhabi's state-owned Masdar, also known as the Abu Dhabi Future Energy Company, to produce 2 gigawatts of solar energy in southern Iraq at a cost of $1 billion. The deal is Iraq's first approach to adopting clean energy in order to reduce pollution, diversify energy sources, and curb reliance on Iranian electricity and gas.

Iraq is one of the most polluted countries, ranking 12th in the world due to the burning of gas associated with oil production and other emissions, according to the Numbeo classification. Prime Minister Mustafa al-Kadhimi’s government has taken a series of measures to reduce pollution as part of the comprehensive economic reform program called the White Paper. Measures include Iraq’s accession to the Paris Climate Agreement, reliance on clean energy in the production of electricity, exempting electric cars from taxes, and forcing the Investment Authority to offer investment opportunities to establish nuclear power plants, solid waste treatment plants that convert waste into energy and solar power plants.

The chairman of the Ministerial Council for Energy, Minister of Oil Ihsan Abdul-Jabbar, explained Iraq's plan to invest in alternative energy and conclude deals with a group of foreign companies. In a session he attended at the Iraqi parliament on June 29, he noted that the current contracts concluded to invest in clean energy amount to 7,000 megawatts with Emirati, Chinese, Norwegian and other international companies. He indicated Iraq aims for energy production of 12,000 megawatts by the year 2030.

Abdul-Jabbar said some of the power stations to be constructed under these deals will enter service during 2022 because Iraq is determined to change the management of its energy. “We have discussions with other companies, such as Saudi ACWA Power, to increase investment in clean energy,” he said. “Iraq has provided sovereign guarantees to investors represented by the Ministry of Electricity buying energy produced from solar plants. Iraq has a plan to gradually replace fossil energy with solar energy, which has a much lower cost. It aims for a national solar energy production of 20%.”

Iraq has long sunshine hours almost all year long and high temperatures topping 50 degrees Celsius in the summer. Add to this, vast lands are unused and suitable for the construction of solar energy projects.

A spokesperson for the Ministry of Electricity, Ahmed al-Abadi, told Al-Monitor the ministry focused on the provinces of Karbala, Wasit, Babil, Diwaniyah and Muthanna to create solar energy. “A tender round for foreign companies was organized to conclude investment contracts in these provinces. The first round of tender resulted in contracts for the construction of solar energy plants of a capacity of 755 megawatts. We set up suitable lands for installing solar panels. The ministry is inclined to increase production of clean energy. We concluded understandings and agreements with international companies such as France's Total. We will hold a second round of tender for solar energy projects at a later time. The ministry has a plan to diversify energy sources and gradually ease reliance on fossil energy.”

A widespread power outage hit the country last week. Iraq needs 30,000 megawatts to solve its electricity crisis, and local production is less than 19,000 megawatts. Despite the government's tendency to adopt clean energy in the production of electricity, the majority of specialists believe this step will only bear fruit after reforming the electricity system, disassociating it from political parties, remedying violations and developing the fee collection system.

In turn, former Minister of Electricity and current member of parliament’s Energy Committee Karim Aftan told Al-Monitor, “The Iraqi government is bound to pay for 12,000 megawatts of electricity from investors. Another 12,000 megawatts of solar energy will be added to make up a total commitment of 24,000 megawatts. The biggest problem the next government will face is how to secure funds to pay the investors’ dues. Electricity fees collection is almost nonexistent with illegal connections to the national grid, in addition to the decline in financial revenues and the rise in public spending.”

He argued that the electricity sector faces a conspiracy. “The design capacity of electricity is currently sufficient to cover the demand, but the focus must be on providing gas to operate power plants by investing in gas fields and associated petroleum gas,” Aftan noted. “The best solution is to form the Ministry of Energy by merging the two ministries of Oil and Electricity to prevent waste of energy.”

Solar energy specialist Hussein Nasser agreed with Aftan that solar energy projects require reforming the dilapidated electricity system. Nasser told Al-Monitor the Iraqi government has begun to announce its inclination toward solar energy in order to contain people's anger amid the endemic power outages. “The government will not succeed in its efforts to tap on solar energy since it will be purchasing this energy from investors at full amounts while selling it to citizens at a subsidized price of 90%.”

Nasser said Iraq ought first to provide protection for transmission lines, reduce subsidies, repair the dilapidated distribution network and install smart meters before embarking on solar energy projects. “Iraq spends annually more than $12 billion on electricity, and so far it has not been able to provide it,” he said. “Failure to fix electricity problems and linking the solar energy system to the national system may lead to its destruction or its continued exposure to problems.”

The Iraqi government seems to be moving toward diversifying its energy sources to break its dependence on imports from neighboring countries such as Iran, Turkey, Jordan and Kuwait. On another note, solar energy could also reduce soaring pollution that has been causing cancerous diseases.