Five southern provinces objected to the Iraqi government's decision to privatize the electricity sector in the country. 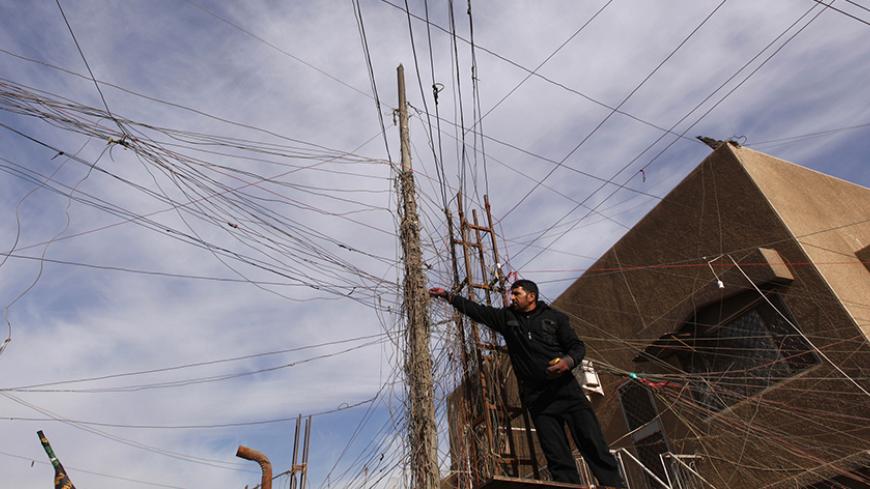 An electrician uses an Avometer to check wires connected to his local generator on a street in Baghdad, Iraq, Dec. 13, 2011. - REUTERS/Saad Shalash

BAGHDAD — In a meeting held Feb. 21, Najaf’s provincial council followed in the footsteps of Dhi Qar, Muthanna, Wasit and Diwaniyah and voted against the privatization of the electricity sector in the province.

Meanwhile, the Iraqi government insists on privatizing the distribution of electricity in all Iraqi regions, despite popular protests against this decision, which many believe harms the poor, who make up 30% of the country's population.

On July 20, 2012, parliament voted on the privatization of electricity after the government failed to improve the situation despite spending $22 billion over the course of nine years attempting to fix the crisis. Iraq needs 30,000 megawatts, but citizens are only provided with 8,000 megawatts.

On Jan. 25, 2016, the Ministry of Electricity applied the privatization project in Zayouna in eastern Baghdad, in partnership with the local company al-Noor al-Thaqib. This year, it concluded agreements with local as well as foreign companies to implement the project nationwide.

Musab al-Moudarres, the spokesman for the Ministry of Electricity, told Al-Monitor, “As a result of residential slums scattered around the country, in which people steal electricity from each other, 65% of the produced energy was wasted. The majority of citizens refuse to pay electricity bills, which are now worth $2.7 million, enough to cover the salaries of the ministries’ employees for two years.”

He stressed, “The ministry has come to the conclusion that the electricity crisis will not be resolved if the situation remains the same, so it suggested the idea of privatizing the distribution of electricity, which aims to rationalize consumption and collect fees while ensuring around-the-clock electricity.” He added, “The project was a success in some areas in Baghdad and it contributed to rationalizing consumption by 30% and putting an end to waste by 100%.”

He further explained, “Some of those who were negatively affected by the project are working against it and trying to mislead public opinion by forging bills and posting pictures of them on social media.”

Meanwhile, Iaraz Abdullah, the head of parliament's Oil and Energy Committee, told Al-Monitor, “We are still experimenting with the project to privatize electricity, despite the opposition expressed by some provincial councils and citizens,” stressing, “The project succeeded in Zayouna, but it might not in other areas.”

He continued, “The Energy Committee is following the policy adopted by the Ministry of Electricity, which still needs major upgrades in terms of production,” noting that “the committee will express its final position in the coming days.”

Faleh al-Ziadi, the governor of Muthanna, told Al-Monitor, “Our rejection was not random; we considered the project and asked the ministry several questions such as whether we would be provided with around-the-clock electricity, whether the prices would be suitable for the poor, especially since half of the province’s population lives under the poverty line, and whether it will support agriculture and industry,” adding, “But the central government and the Ministry of Electricity are yet to answer the questions we raised.”

Ziadi continued, “The province has alternative solutions, such as restoring our existing power plants in order to turn Muthanna from a province that imports power from Basra and Dhi Qar into a province that produces electricity and relies on collecting fees and providing maintenance.”

Meanwhile, Mohammed al-Azzawi, a resident of Zayouna neighborhood, told Al-Monitor, “The privatization of electricity has increased the fees, without taking into account the economic conditions in our country. During the first month, I paid 520,000 dinars [$442] for 5,000 units [kilowatts]. If middle-class citizens cannot afford such fees, how can the poor?”

For his part, Abdul Rahman al-Mashhadani, an economics professor at The Iraqi University, said that the project is bound to fail. He told Al-Monitor, “The project aims to distribute the current production, which amounts to 8,000 megawatts, to all Iraqi regions, in exchange for the investors’ collected fees. The areas in which the project is not implemented are denied electricity, while others can enjoy electricity 24 hours a day.”

He added, “Even after the project is completely implemented throughout Iraq, the electricity crisis will persist and power cuts will continue to occur, because despite the billions of dollars that were spent, no improvements were made to the production sector.”

Mashhadani further noted, “The Ministry of Electricity has concluded agreements with international companies in the past, but those projects stalled, and the current contracts will not be implemented in the next couple of years due to bureaucracy.”

It should be noted that the Ministry of Electricity signed two contracts with General Electric on Jan. 26 to build power plants in Nasiriyah and Samawah to increase their generating capacity by 2,250 megawatts. The ministry also signed a contract with Japan on Jan. 11 to develop the Hartha plant in Basra province and another contract to build secondary power plants.

The success of the privatization project depends on its management by the government and whether it will be supported by major and rapid investments for its implementation.