Egypt is trying to take advantage of the crisis between Chinese smartphone companies and India by providing incentives to such companies to lure them into investing in the Egyptian market. 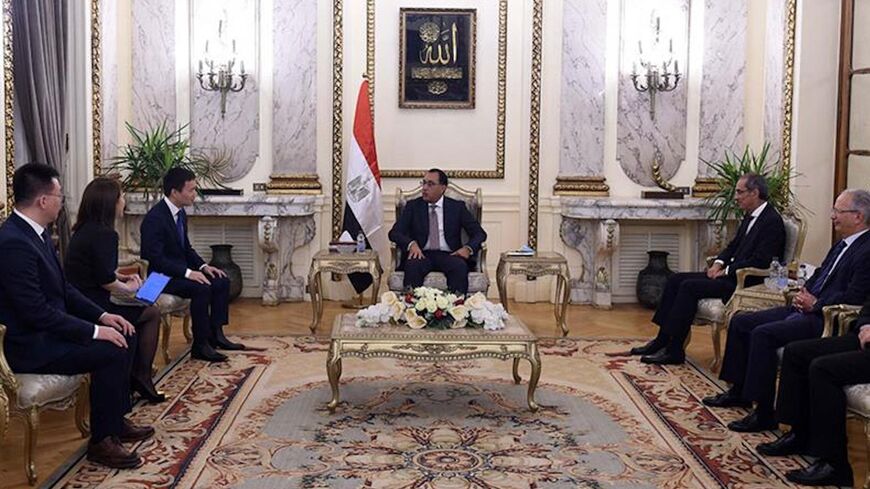 Egypt is trying to take advantage of the escalating crisis between China’s mobile smartphone companies and India by providing facilities that would encourage these companies to invest in the Egyptian market.

On Sept. 13, Cairo signed a memorandum of understanding with the Chinese consumer electronics manufacturer Oppo under which the Chinese company will establish a mobile phone factory in Egypt, with a production capacity of 4.5 million units per year at a cost of $20 million.

In an article published Sept. 14, the Chinese English-language newspaper Global Times quoted an India-based Chinese executive as saying that the deal to establish a factory in Egypt “may herald an exodus of Chinese mobile phone firms from India amid the country's escalating crackdown on Chinese companies.”

The source, who requested anonymity, added to the paper, “The management in Chinese smartphone brands in India felt a palpable sense of being squeezed by the Indian government's crackdown and its [protectionist] actions to improve domestic companies' capability to make sophisticated electronics such as smartphones.”

“Chinese smartphone brands are also looking at Indonesia, Bangladesh and Nigeria as replacements for India,” the report said.

The crisis between India and Chinese smartphone companies has reached its peak in recent months as Indian authorities escalated their crackdown against these companies, most notably Oppo, under the pretext of tax evasion.

More than 2,800 Chinese companies have left the Indian market since 2014 amid increasing restrictions by Indian authorities and high tariffs, as India seeks to boost its domestic industry.

A July 17 report by The Financial Times pointed out that three Chinese mobile phone companies control about 60% of the smartphone market in India, which is trying to incentivize local manufacturing and reduce dependence on Chinese imports.

The report added that “India insists the legal cases against Chinese companies are not politically motivated.”

In light of this crisis, Egypt has stepped up to lure Chinese companies into its own market by offering them investment incentives.

Egypt’s Communication and Information Technology Minister Amr Talaat said in a television interview on Sept. 14 that “the Egyptian government will provide the incentives required for these new firms, be they land, license or importation incentives. Also, these firms would be exempted from most government fees as long as they commit to a 40% local component percentage in their products.”

The Egyptian government is seeking to eliminate any obstacles that could face major companies manufacturing smartphones in Egypt.

In a statement to al-Masry al-Youm news website on Sept. 25, Talaat said that a joint commission that includes the ministries of industry, finance, and communication and information technology will be formed with the aim of finding solutions to the problems that investors in the telecommunications sector and the manufacture of smartphones could come across in Egypt.

Walid Ramadan, deputy head of the Mobile and Communications Division at the Chambers of Commerce, told the Masrawy website on Sept. 19 that his division has prepared a working paper to be submitted to the Egyptian government with proposals to motivate other international companies in the phone industry to invest in Egypt.

He added that these proposals include tax exemptions and the provision of factories for these firms in return for discounted prices to be paid over the course of 10 or 15 years, with a repayment exemption during the first three years.

The Egyptian market is characterized by a high volume of demand for phones, with the annual demand reaching 20 million units, according to the Egyptian Ministry of Communication and Information Technology.

On July 22, Talaat inaugurated the new Vivo factory in the 10th of Ramadan City, which was built on an area extending over ​​11,000 square meters, at an estimated cost of about $20 million, reaching $30 million within a year.

In August, the company announced the launch of two new phones “Made in Egypt” inscribed on them.

On Sept. 21, an anonymous official from the smartphone industry revealed to Masrawy that “Samsung is very likely to manufacture some smartphone models in Egypt.”

In December 2020, the Chinese company Infinix announced the manufacture of phones in the technology zone of Assiut in Upper Egypt after launching production lines for its smartphones in Egypt.

Cairo is seeking to localize the phone industry in line with Egyptian President Abdel Fattah al-Sisi’s initiative to make Egypt a regional industrial base.

In February 2018, the Egyptian Ministry of Communication and Information Technology announced the manufacture of the first Egyptian-made smartphone, SICO, for sale in Egypt at inexpensive prices.

In a related context, Ehab Saeed, a board member of the Cairo Chamber of Commerce and head of the chamber's Division of Communications Centers, told Al-Monitor, “International mobile companies, especially Chinese ones, resort to Egypt for several reasons, the most important of which is that Cairo is a distribution center for Africa.”

“The crisis between Chinese companies and India is in Egypt’s interest, but the Egyptian government should swiftly facilitate the factory establishment procedures,” Saeed said.

He explained that “Egypt has competitive advantages as its energy prices have not been raised and its labor costs are low, and these are factors that attract international mobile companies.”

He stressed that “the Egyptian government should not let such factories fall prey to red tape and investment obstacles, as it should seek to help them accomplish their tasks all the while building on the successful experience of the Chinese company Oppo in order for it to serve as a starting point for other international companies.”

China in the Mideast
Technology