Faced with various economic challenges, the Egyptian government now has to protect its national industry from Chinese goods, which are both cheaper and made to better suit the population’s needs. 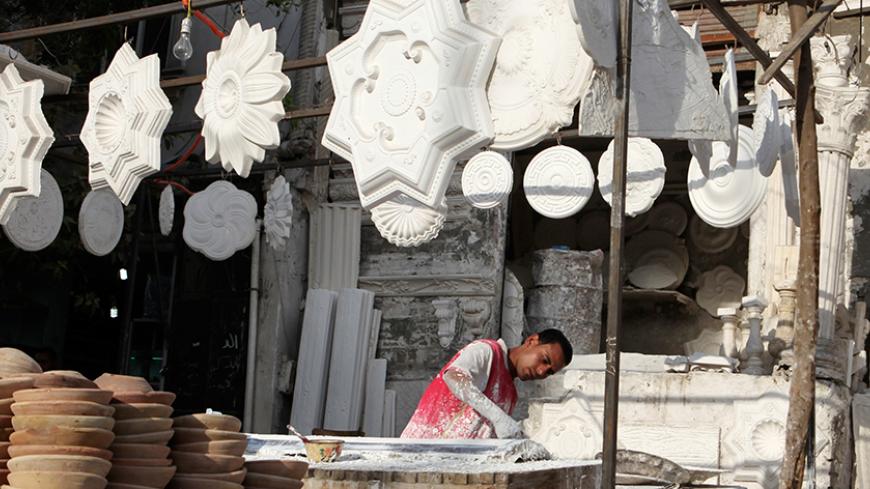 A worker makes decorative elements from plaster at an outdoor workshop in Cairo, Feb. 26, 2013. - REUTERS/Asmaa Waguih

Chinese goods, especially traditional handicrafts, have invaded the Egyptian market. In this regard, Atef Yaacoub, head of Egypt's Consumer Protection Agency, stressed in March 2013 the need to take strict measures to stop the flow of the goods into Egypt.

Although the quality of Chinese products might be at times questioned, they were met with large demand because of their low prices, as the number of Chinese companies in Egypt rose from 1,000 in 2010 to 1,198 in 2015.

The market for these products has grown considerably and become a primary factor behind the current economic downturn, leading former Egyptian Minister of Trade and Industry Mounir Fakhry Abdel Nour to decree in April 2015 an import ban on all Chinese imitations of Egypt's traditional handicrafts in an attempt to curb this invasion of the Egyptian market.

The former minister justified the ban on Chinese goods at a press conference in April, arguing that it aims to preserve the local production. He said, “This decree is 100% legal, as it comes in application of the 1994 international General Agreement on Tariffs and Trade [GATT], which gives us the right to protect our local goods.”

GATT Article 20 stipulates that any country has the right to take the necessary measures to protect its "national treasures of artistic, historic or archaeological value." Therefore, any country is allowed to take preventive measures in the form of customs duty in order to temporarily protect the national industry.

However, the government was unable to implement this decree, as Chinese goods are still scattered in the Egyptian market, particularly in Khan el-Khalili, al-Hussein and el-Ataba, which are the most famous souks in Cairo, where goods with folkloric and traditional features are sold.

Fathi al-Saeed, a merchant who sells Chinese products in Ataba, told Al-Monitor, “I’ve been selling Chinese products for the past four years ever since the local industry collapsed and began to rely on exports. This is mainly due to the high demand on these goods, as Egyptian consumers turned away from Egyptian-made products, preferring Chinese imports because of their low prices and availability. And although these consumers are aware of these items’ poor quality, they proved popular among the lower classes.”

He added, “The prices of Egyptian products are relatively high compared to the Chinese ones. For example, the production cost of a fanous [traditional Ramadan lamp] in Egypt is 35 Egyptian pounds [$4.36], while that of the Chinese alternative stands at no more than 10 [$1.25].”

“It’s not our fault that the government is failing to meet people’s needs in accordance with their purchasing power. We should also not be blamed if China is able to do so at low prices,” Saeed said.

Not only are Chinese goods found at local shops, but Chinese vendors now visit Egyptians in their houses to sell them their goods, which mainly include clothing, pottery and electronics.

In terms of foreign investment in Egypt, China ranks 24th, with 1,198 Chinese businesses investing a total of $468.5 million in the country, mainly in the industrial and financial services sectors.

Al-Monitor spoke to Hong-Li, a Chinese peddler in Cairo who speaks Arabic fluently. “Egypt enjoys a special status and importance for the Chinese government, because our products are increasingly popular among Egyptians," he said.

He said, “My job is not limited to passing by Egyptians’ houses to offer my products, as I also talk to them about their needs and clothing desires. I then take notes and tell the owner of the factory I work with in China to design the product that appeals to the Egyptian taste, at a low price, to distinguish it from other imported goods. After that, I visit the houses with the product they wanted and sell it at the most convenient price.”

The head of the Egyptian Commercial Service, Muhammad Dawood, said in November 2014 that the total trade of imports and exports between Egypt and China amounted to $10.3 billion in 2013, equivalent to an 8.4% increase from 2012. While Egyptian exports to China reached $1.9 billion, Chinese imports in Egypt totaled $8.4 billion.

On Oct. 19, the former governor of the Central Bank of Egypt, Hisham Ramez, said in an interview with the Egyptian newspaper El-Watan that the total Chinese exports to Egypt stood at $9.1 billion last year, estimating that the cost of imports and services rose to $80 billion.

According to Ramez, the annual increase of Chinese imports threatens local production. Ramez also noted that “Egypt has turned into a huge importation hub, while the country should be more productive in order to curb the $38.785 billion deficiency of the commercial balance, an increase of $4.723 billion because of an increase of import costs from the 2013-2014 financial year when deficiency was at $34.062 billion.”

In an attempt to offer a solution, Minister of Industry and Trade Tareq Qabil said Oct. 18 that the ministry is working on boosting Egyptian exports to China to balance trade between the two.

Banha University economics professor Muhammad Ibrahim told Al-Monitor, “China’s crawling into the Egyptian market is an undeniable sign of the collapse of Egypt’s industrial sector. Before the government takes such a decision, it first has to promote national production and encourage people to support it. The imposition of a ban on Chinese-made traditional handicrafts without offering an alternative is not going to serve its purpose.”

He added, “The government focused on banning the import of traditional handicrafts because they are not commodities and therefore can be produced by local industry. But the government didn’t even provide an alternative product at the same price of the Chinese one, so people accept it and abandon the latter."

Ibrahim concluded, “The government made a good decision, but the Ministry of Industry has to launch media campaigns aimed at encouraging people to buy local goods and convince them of the dangers facing Egypt with the spread of Chinese goods. The government must also train young people to produce goods that match the Chinese ones in terms of their prices while meeting people’s needs. Without these steps, the government’s decision is doomed to fail.”