The cease-fire has bestowed a massive relief on millions of Yemeni citizens, who fear a return to conflict. 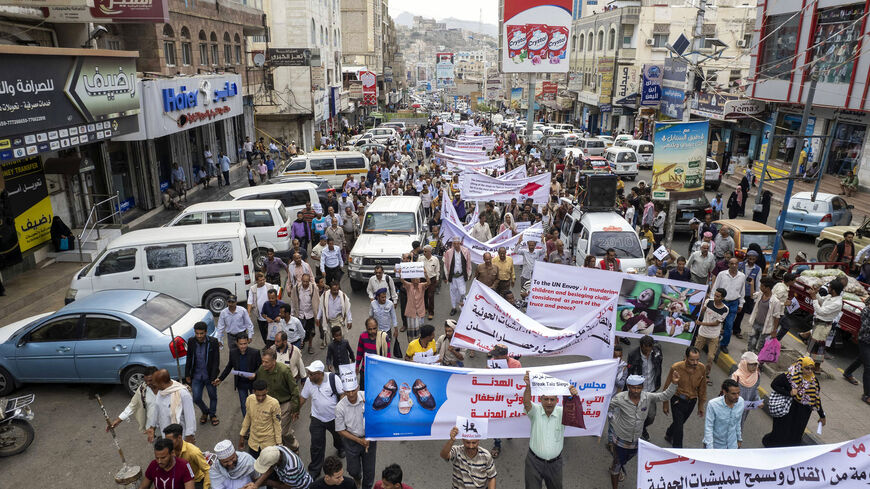 Yemeni demonstrators protest demanding the end of a yearslong blockade of the area imposed by the Houthi rebels on the country's third-largest city of Taez, Yemen, July 26, 2022. - Ahmad al-Basha/AFP via Getty Images

Quiet time is running out in Yemen as the UN-sponsored truce is about to expire. The four-month respite from the war began April 2. Aug. 2 is the deadline. Renewed strife or another cease-fire extension will follow. It is a tense moment for millions of people nationwide.

The catastrophic war began in 2015, and the first truce was declared in April this year, thanks to the United Nations and US diplomatic efforts. The cease-fire has provided massive relief to millions of citizens, but grief will strike them all should diplomacy fail to bring a new truce extension.

While the parties to the conflict have not confessed any battle fatigue, the grassroots have been fed up with war and crises. The collective dream of citizens now is a permanent halt of combat. Laila Saleh, a 32-year-old school teacher in Sanaa, cannot hide her worry about the return of the destructive armed confrontations and the failure of the cease-fire extension.

She told Al-Monitor, “The truce expiry — without renewal — literally means rising violence, deepening hunger and agony. I pray the cease-fire will be extended again and again.” Over the last four months, Saleh and millions of people in Yemen felt the tangible outcomes of fighting cessation. Losing this relief will throw the population into great suffering.

UN reports indicated that the number of casualties in Yemen has lowered since the start of the truce. People’s movement from one province to another has improved, and the fuel crisis has been tackled. However, all these blessings would vanish should the UN, the United States and other international and regional powers fail to press for another cease-fire.

Last month, US President Joe Biden said during his visit to Jeddah that Saudi Arabia agreed to extend the cease-fire in Yemen. That was a hopeful sign to millions of Yemenis, mainly the internally displaced, thousands of patients who need treatment overseas and Yemeni nationals stranded abroad.

Last week, US special envoy for Yemen Tim Lenderking visited Riyadh and Amman for talks that focused on “expanding, extending, and renewing the current truce agreement that will further the tangible benefits already reaching Yemenis and build towards a more comprehensive, inclusive peace process and permanent ceasefire,” according to a statement released by the State Department.

Saleh has been living in Sanaa for the last 10 years, and she knows what it feels like when war dominates the scene in the country. “If the war is to resume, three basic needs will be scarce to find: cooking gas, petrol and diesel. This will be enough to make life hellish. Prices of all food commodities will soar, transportation fees will increase and unemployment rates will go up.”

Mohammed Fuad, a 24-year-old construction worker in Sanaa, displayed a similar concern. Like Saleh, Fuad expects Yemen to continue the deadly war unless the truce is renewed. “We are the victims; our voices do not matter to combatants who are thirsty for more battles. The truce may have bothered them, but it has been a lifeline to us.”

Fuad explained how difficult his life would be if the truce expires and hostilities break out. “I am a daily wage worker in the construction field. In the presence of instability construction projects largely shrink, affecting my job chances and those of thousands of other workers. I hope the truce will not collapse.”

Not everyone in Yemen shares this view of the UN-sponsored cease-fire. Some Yemenis prefer a decisive war that leads to a final solution. Naef, a pro-government Yemeni soldier in Marib, likens the truce to a painkiller.

He told Al-Monitor on condition his full name would not disclosed, “The military power — not the faltering diplomacy — can plant the foundations of peace across Yemen. Even if the government spends a century negotiating with the Houthi group, no consensus will be reached. Therefore, force is crucial for peace, and the truce is just a fighting pause.”

The military deadlock in Yemen has entered its eighth year, pushing the regional and international powers to seek a solution through diplomacy. However, the success of this approach is also doubtful, according to Yemeni political observers.

Abdulsalam Mohammed, head of Abaad Studies and Research Center, a Yemeni nonprofit research organization, told Al-Monitor that the conflict in Yemen is nowhere close to an end. “Even if the truce is ongoing and a possibility of ending the conflict exists, the strife will not cease because the Yemeni file is linked to other regional files. The war is not between Yemeni rivals only, it is also between Saudi Arabia and Iran.”

Majed Aldaare, editor-in-chief of Moragboon press news site, said the truce is fragile and cannot be counted as a remarkable stride toward peace. “The cease-fire is not a final solution as fighters redeploy and prepare for another all-out war,” he told Al-Monitor.

Over the last seven years of hostilities, the Houthi group has outperformed the Yemeni government forces on multiple fronts. But if this truce ends and the fighting begins, the dynamics of the conflict will change, and the government forces will score gains on the ground, Aldaare said.

“The government nominated a new defense minister on Thursday [July 28], four days before the truce expiry. This conveys its preparedness for another war round against the Iran-allied Houthi group. The failure of a truce extension sets the stage for fighting, and I foresee a better military performance of the government forces this time around,” he concluded.