Turkey's President Erdogan warned again this week that his government would block the two Nordic countries' bid to join NATO unless they take action against Kurdish leftist groups. 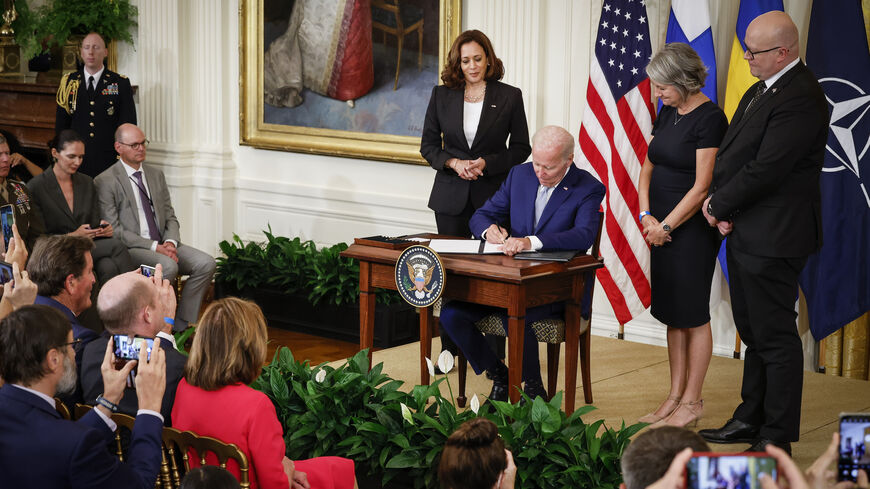 US President Joe Biden signs the agreement for Finland and Sweden to be included in the North Atlantic Treaty Organization in the East Room of the White House on Aug. 9, 2022, in Washington, DC. Looking on, L-R, are Vice President Kamala Harris, Sweden's Ambassador to the United States Karin Ulrika Olofsdotter, and Finland's Ambassador to the US H.E. Mikko Hautala. - Chip Somodevilla/Getty Images

US President Joe Biden signed Washington’s approval for Sweden and Finland to join the North Atlantic Treaty Alliance (NATO) on Tuesday, describing it as a “watershed moment” for European and global stability.

“Together, we commit that the United States, Finland and Sweden will continue to remain vigilant against any threats to our shared security, and deter any confrontation and confront any aggression or threat of aggression,” Biden said.

The context: Sweden and Finland broke decades of neutrality in a bid to join the Western alliance following Russia’s invasion of Ukraine in February.

If approved, the move would nearly double NATO’s shared border with Russia, a prospect to which President Vladimir Putin has offered very limited public objection.

However, the president of NATO member Turkey, Recep Tayyip Erdogan, said his government would obstruct the approval process until the two Nordic countries hand over alleged associates of Kurdish militant groups, including the Kurdistan Workers Party, or PKK, and coordinate with Ankara against such organizations.

Ankara also demanded that the countries lift bans on arms trade with Turkey imposed after the latter’s 2019 military assault on Syrian Kurdish-led forces that fought the Islamic State group with US and Western support.

Turkish officials signed an agreement with Swedish and Finnish counterparts addressing the concerns on the sidelines of the NATO summit in Madrid in late June.

Speaking to a gathering of foreign ambassadors in Ankara on Monday, Erdogan reiterated that Turkey would not approve the process until officials in Stockholm and Helsinki had fulfilled their side of the deal.

"Turkey will not ratify the memberships of the two countries until the promises that were taken under the record are fulfilled," Erdogan said in reference to the Madrid memorandum.

“NATO membership of countries where members of the Kurdistan Workers Party freely roam the streets is detrimental to the values of the alliance,” the Turkish president was further quoted by Russian state media as saying.

What’s next: During the Madrid summit, all 30 NATO alliance members approved the accession protocols for Sweden and Finland to join. Now, each of those countries’ governments must independently ratify the decision. So far, 23 have done so.

The US Senate, which holds the authority to ratify treaties, voted last week 95-1 to approve Sweden and Finland’s membership.

“I urge any remaining allies to complete their own ratification progress as quickly as possible,” Biden said during the signing ceremony at the White House today.

Ankara is likely to be one of the last to approve and may only do so after the June 2023 Turkish elections, as Erdogan projects strength as he vies to retain control of the presidency, Rich Outzen, a former US State Department adviser, argued in an Atlantic Council publication yesterday.