Turkish pop singer Gulsen is under house arrest after spending the weekend behind bars for a four-month-old quip about religious school alumni. 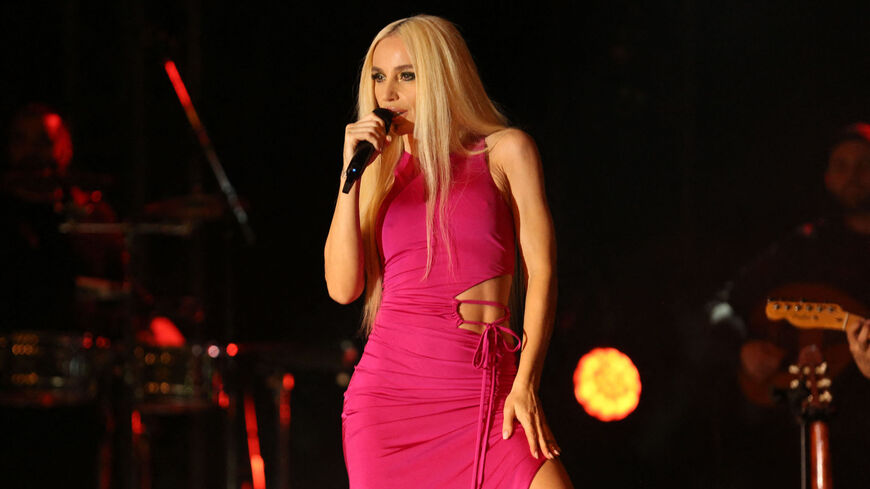 Amid international concerns and national protests, a Turkish court released pop singer Gulsen from jail Monday but placed her under house arrest as she awaits trial on charges of “inciting hatred and enmity.”

The 46-year-old Gulsen Bayraktar Colakoglu, known on stage by her first name, was put behind bars Aug. 26, after an Istanbul prosecutor opened an investigation into a quip she made on stage four months ago. “He has studied in an Imam Hatip. … That is the root of his perversity,” Gulsen said, referring to religious secondary schools in an apparent jest to a member of her band, as both the band member and members of the audience clapped and laughed.

The 15-second-clip, shared by pro-government daily Sabah and ATV on Aug. 24, went viral immediately as Turkey’s minister of justice and several others lashed out at her in unison. Conservative pundits leveled insults at her for disrespecting Imam Hatip alumni, a vocal and politically powerful group that includes President Recep Tayyip Erdogan.

“Inciting one part of society toward another using begrudging, hateful and discriminating language under the guise of being an artist is the biggest disrespect to art,” Turkey’s Justice Minister Bekir Bozdag tweeted, saying that the artist’s remarks were “primitive” and “archaic.”

Though Gulsen issued a public apology for her remarks, a public prosecutor ordered her pre-trial detention two days later. Her lawyer, Emek Emre, said his legal team challenged the arrest, calling her detention both irregular and illegal.

But until the court ruled for her release Monday, the singer spent the weekend in Bakirkoy Prison, in a cell adjacent to that of award-winning producer Cigdem Mater, who is serving an 18-year-sentence in connection with the 2013 Gezi Park anti-government protests.

Gulsen’s arrest, which made international headlines, was met with concern by Washington. A US State Department spokesperson expressed concern about the “widespread efforts in Turkey to restrict expression” via censorship and judicial harassment following Gulsen's detention. In addition, various women’s organizations criticized the sharp contrast between judicial inaction toward femicides and violence against women and the artist's speedy arrest.

The We Will Stop Femicides Platform, an award-winning rights group engaged in a legal battle against its closure, held a demonstration in support of the singer in front of the courthouse in Istanbul.

Monday's ruling placing the artist on house arrest also spurred outrage from opposition politicians, artists and jurists. It means that Gulsen cannot perform at several scheduled concerts, including a large open-air show planned for Sept. 7 in Istanbul, tickets for which are almost sold out.

Emre said that while he welcomed the fact that Gulsen would “spend the night at her own home with her child,” the legal team would apply for her release from house arrest as the court had already acknowledged that she did not pose a flight risk.

“This house arrest aims to ban her from giving concerts, from appearing on stage, from wearing the dresses she wears and from waving a certain flag,” tweeted Gokce Gokcen, the deputy chair responsible for youth policies of the main opposition Republican People’s Party (CHP).

Gokcen’s tweet refers to repeated attacks on Gulsen by the conservative media for wearing transparent minidresses and waving an LGBTI+ flag on stage. Some pundits believe that the case against her is really about her support of LGBTI+ causes, while others said that in today’s Turkey, any criticism of Imam Hatip schools is an attack on sacred cows. Last year, Erol Mutercimler, a journalist who said in a television program that many crimes of child molestation and corruption were carried out by graduates of Imam Hatip schools, was sentenced to 10 months in prison.

Gulsen’s arrest highlights three critical trends in the Turkish political landscape. First of all, it adds to the claims that the judiciary has become a tool in the hands of the government and is used to shut down the opposition and punish those who do not subscribe to a conservative lifestyle.

Social democrat pundit Baris Pehlivan pointed out that the prosecutor in the Gulsen case was the same one who ordered the arrest of journalist Sedef Kabas, who was charged with insulting the president earlier this year.

“All that is rotten, all that is illegal and immoral leads to the presidential palace,” CHP deputy chair Veli Agbaba said Monday. “Where are the judges and prosecutors to investigate these claims? Shouldn’t they be looking into the allegations instead of arresting Gulsen?”

Faced with attacks, the Council of Judges and Prosecutors made a statement defending the independence of judges, whose decisions were based on the existing legal system including the constitution and according to their conscience. “No authority or person can give orders and instructions, send memos or make recommendations and suggestions to courts and judges,” it said. In a thinly veiled warning, it urged press organs to refrain from “intervention” in judicial decisions, particularly if their words went beyond criticism and bordered on insult.

The second point in the Gulsen saga is the growing conflict between the government and the entertainment world. Artists have become a vocal critics of the government, which has banned at least 14 youth and music festivals over the summer, attacked singers such as Sezen Aksu and imposed unofficial bans on certain content.

Many artists rallied to support Gulsen, particularly after she made her apology. One of the most outspoken was Kaan Tangoze, the lead singer of the rock band Duman. “There is nothing to say; all is clear,” he said in a concert in the coastal city of Bodum yesterday. “The elections are approaching; you know what to do. The government is shooting itself in the foot.”

The third is the cracks within the conservative bloc. Like Aksu, the pop diva attacked by Islamist nationalist groups for a song she wrote five years ago that allegedly insults the biblical Adam and Eve, some even among the AKP thought that taking the issue to court was going too far. Several pro-government columnists, such as Mehmet Barlas and Sebnem Bursali, said that while Gulsen’s words on Imam Hatips were offensive, putting her behind bars was too much.

"I'm also a graduate of a religious high school," conservative opposition journalist Nihal Bengisu Karaca said. "I was also hurt by Gulsen's insult. I showed my reaction by writing an article. But why is Gulsen being arrested?"

On the other hand, the opposition CHP pointed out that the judges were adept at ignoring insults to religion when it came from people close to the AKP. “A figure who mocked the Quran’s Baqarat verse has not only faced no charge but is currently Turkey’s ambassador to the Czech Republic,” said CHP chair Kemal Kilicdaroglu.