Sezen Aksu, the reclusive diva of Turkish pop, has become the latest target of conservatives who accuse her of blasphemy. 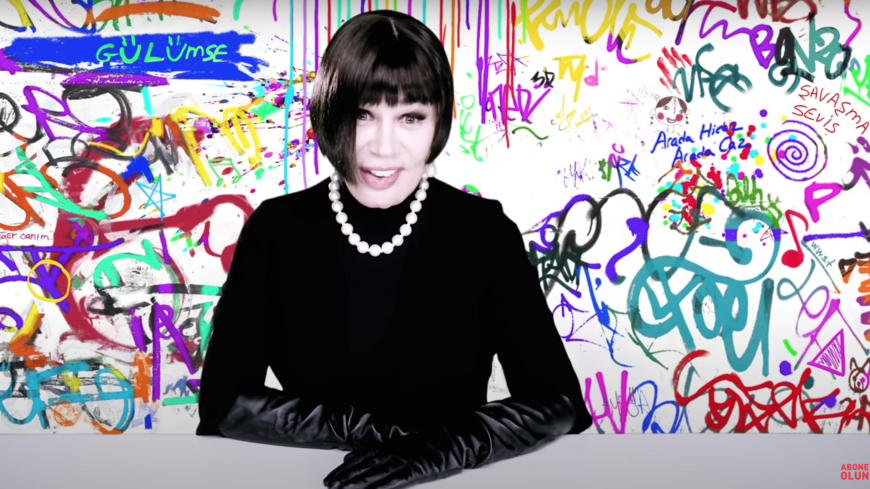 The music video for Sezen Aksu's "Manifesto" is pictured in this still image. - Sezen Aksu

Sezen Aksu, the unrivaled queen of Turkish pop, has invoked the wrath of the country’s Islamist nationalist groups with a song she wrote five years ago that allegedly insults the biblical Adam and Eve.

With Turkey’s challenges piling up from a faltering economy, political divisions ahead of upcoming elections and conflicts in and with neighboring countries, it may appear strange for a five-year-old song by a reclusive diva in her late 60s to make headlines. Yet since the beginning of the week, Aksu, a slight figure with full lips and soulful eyes, has been one of the top issues in parliamentary speeches, statements by Turkey’s powerful Religious Affairs Directorate (Diyanet) and some Turkish political parties’ internal dynamics.

The controversy started when Aksu shared a clip of her 2017 song, "Şahane Bir Şey Yaşamak" ("How Wonderful to Be Alive") on her YouTube channel, wishing everyone a happy new year. “Pleasure and pain, plans and games, standing tall or hitting the bottom, it is wonderful to be alive,” go the lyrics. “Here we are, on a rollercoaster, heading straight to disaster, just say hi to Adam and Eve, those ignorants.”

Islam considers Adam the first prophet and refers to him and Eve with the religious honorific titles Hz. Adem and Hz. Havva.

When the song — largely ignored until then — took off on social media, Aksu became the target of dueling hashtags. First #sezenaksuknowyourplace accused the singer of blasphemy, and then #sezenaksuisnotalone expressed support for the pop star’s freedom of expression. After a week, the controversy is still fueled by political statements on both ends of the political spectrum.

On Jan. 17, the powerful Diyanet made a statement that urged Turks to be careful of public sensibilities in referring to religious figures. The statement did not name Aksu, but said that statements about holy figures including Adam and Eve must not show disrespect “whatever the reason, intention or content.”

Cuppeli Ahmet Hoca, an often ridiculed cleric with a large online following, pointed an accusing finger at Aksu and her supporters. “If those who deign to insult the mother and father of humanity are considered to be the top artists of this society, isn’t it clear that this is not a society that is worthy of God’s favor?” he tweeted.

That evening, a group of 20 people from the National Defense Movement staged a protest in front of the 68-year-old’s house in Beykoz, a chic neighborhood of Istanbul. "Some pseudo artists have been racing with each other to belittle our national and spiritual values and insult religion under the guise of art,” said Murat Sahin, the chair of the association. The group, which defines its mission on its website as to protect and maintain the country's Turkish-Islamic heritage, has been described by columnist Baris Terkoglu as the “Black Shirts” of Interior Minister Suleyman Soylu. Its members have held several demonstrations in Istanbul, accusing the municipality of employing members of the outlawed Kurdistan Workers Party.

The demonstration in front of the artist’s home, where the group’s actions were tightly controlled by the police, ended peacefully, but Sahin announced on social media that the protest may not be the last one. “We have shown our reaction to this ignorant person. We will adamantly continue our battle with those who insult our national values and religion,” he said.

An Ankara-based group of lawyers has filed a judicial complaint against Aksu that she has "insulted religious values."

Article 216/3 of the Turkish Penal Code penalizes “public degradation of religious values” and if the act disturbs the public peace, the offender may be imprisoned from six months to one year.  The vaguely worded article has been used increasingly often in Turkey in the last 10 years. During the Bogazici University protests, two students were arrested and charged with insulting religious values for putting up a poster depicting Islam’s most sacred site with LGBT flags. Various Turkish intellectuals who made satirical or humorous references to religion have been charged with blasphemy as well, including renowned pianist Fazil Say and Turkish-Armenian writer Sevan Nisanyan.

Fellow artists rushed to support Aksu. “I am behind Sezen. She is one of the most valuable artists in this country and region,” said Mabel Matiz, from the younger generation of musicians. MESAM, an association that supports the rights of creators of music, also rallied to support Aksu, saying that the attacks on her were unacceptable and worrying.

Nicknamed “Little Sparrow,” Aksu has been an innovator in the Turkish pop scene for nearly half a century. Though her initial fame was due to her rich and husky voice and live shows, she is also widely known as a songwriter. A brilliant lyricist, Aksu is very apt at turning everyday phrases or saucy expressions into catchy, devil-may-care refrains or moving her audience to tears with songs that captured moments of agony, such as the death of a child or destruction of a town.

Drawing both on Western classical and local Turkish musical traditions, she scored one hit after another, influencing and educating younger generations of pop singers. Her fame went beyond Turkey as she cooperated with Bosnian singer Goran Bregovic and Turkish-German director Fatih Akin. In 2010, she was named among the top 50 voices by American National Public Radio. Six years later, she announced that she would never appear in another concert — and has kept her word. Today, her album sales are around 40 million worldwide.

Her politics, on the other hand, have been controversial, fiery and sometimes a bit blurry. She was heavily criticized by secularists when she expressed support for the Kurdish initiative of Recep Tayyip Erdogan, then the prime minister of Turkey, and voted in favor of the constitutional changes in the 2010 referendum, a defining moment that many secularists believe opened the floodgates for Erdogan’s unshakeable grip over the state. It was precisely for this reason that some of her contemporaries were reluctant to throw their support behind her. “We will not let the wolves get you but perhaps you, dear sparrow, will realize that the political Islamists were never democrats and you will not disappoint us in another referendum,” tweeted Ilyas Salman, a comedian who is facing up to two years in prison for insulting the president.

Aksu, who enjoyed the government’s favor in the early 2000s, came out strongly in support of the 2013 Gezi Park demonstrations and dedicated a song, “Yeni ve Yeni Kalanlar” (“The New and Those Who Remain New”) to the protesters. Dubbed “the Liza Minelli of Turkey” due to her popularity with the LGBT movement, Aksu has publicly supported gay rights.

While government figures steered clear of the controversy and Aksu firmly refrained from commenting on the blasphemy vs. artistic freedom debate, the toughest statement against her came from Devlet Bahceli, the grim chair of the Nationalist Movement Party and Erdogan’s political ally. Depicting Aksu as “a worthless artist who had written a nonsensical song” to his party’s parliamentary group on Jan. 18, Bahceli said, “If you are a sparrow, be a sparrow, do not aspire to be raven.” Early Turkish mythology sometimes refers to ravens as a symbol of death and deceit.

“Artists must speak out; you cannot silence their voice,” tweeted Ekrem Imamoglu, Istanbul mayor from the opposition Republican People’s Party, tagging not only Aksu but Tarkan and Mustafa Sandal, two artists who have been critical of the government’s human rights record. “They are the inner voice of this nation.”

On the right of the political spectrum, Democracy and Progress Party chair Ali Babacan also expressed support for Aksu. “Turkey can only develop if there is freedom of expression,” he tweeted. “Our artists need to be free. We cannot accept the attacks on Aksu.” A member of his party, the local chair in the eastern town of Elazig, Adem Sagir, resigned in protest of Babacan’s expression of support. “I cannot stay in the party if it supports someone who insults religion,” he said.