Turkish pop star Mabel Matiz's “Copshop,” a song that tells the story of a gay man tortured in a police station, dovetails with a month-long government crackdown on LGBTQ groups and activities during Pride month. 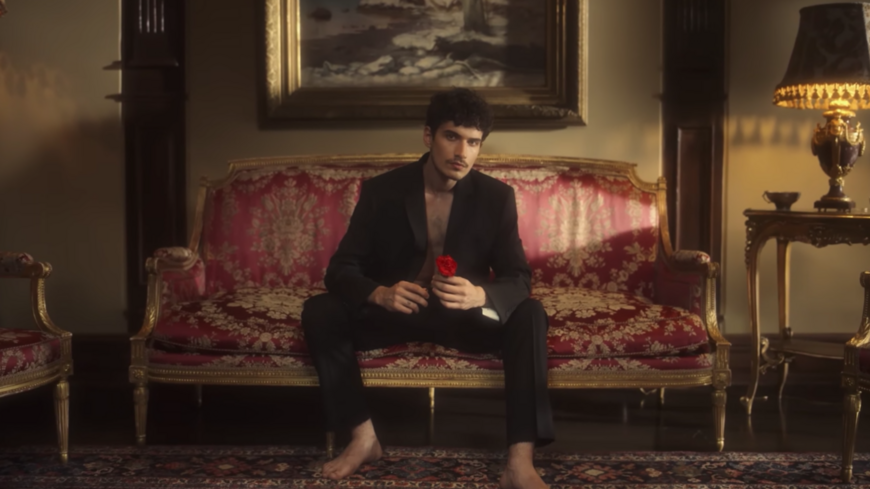 A screengrab from the music video for "Copshop" by Turkish pop star Mabel Matiz. - Mabel Matiz

“I cannot wait until midnight. Should we just release the song right away?” tweeted Mabel Matiz, the up and coming young star of the Turkish pop scene, on June 30, the last day of Pride month. Within minutes, he released the video for “Copshop,” a melodic reflection on a gay man tortured in a police station. Mere hours later, the hit became a trending topic on Twitter, with dueling hashtags: #copshop among supporters and #MabelMatizKnowYourPlace among those who attacked the video for what they called its obscene content. Within a day, Turkey’s media watchdog the Radio and Television Supreme Council (RTUK) warned TV stations not to air the video, which touches on two taboo subjects on its list: homosexuality and torture in police stations.

“They grilled me, but I did not reveal your name / They carved in my heart the grave of love,” go the lyrics. Matiz, a gaunt-faced man with haunted eyes, sings longingly to a dark, brooding man amid neo-Ottoman decor. There are neither explicit love scenes nor nudity; only the use of symbolism such as flower petals hints that they are lovers. “A scandalous video with shameless innuendos,” read the headline of notoriously homophobic daily Yeni Akit. It claimed that Matiz, like Disney and Marvel, aimed to “normalize homosexuality.”

“The Radio and Television Supreme Council is calling television and media stations one by one to tell them not to air the video,” Ilhan Tasci, a member of the RTUK from the opposition Republican People’s Party, tweeted. The manager of a popular music channel confirmed that the channel was “cordially asked” not to air it, but the council had not made a formal written request. “I guess they do not want to create the controversy they faced when they banned a video by Sezen Aksu for blasphemy last January,” she told Al-Monitor on condition of anonymity. The famous singer had come under attack by the president for what conservatives called a disrespectful reference to Adam and Eve. Still, when the public sided with the pop music diva, the president and RTUK backpedaled.

Wisened government officials — including Interior Minister Suleyman Soylu, who repeatedly attacks the LGBTQ community and says homosexuality does not belong in Turkish culture — made no remarks on the video.

Matiz’s controversial hit came at the end of a turbulent Pride month in Turkey, where at least 10 events by Turkey’s LGBTQ community throughout May and June were banned and hundreds of demonstrators were detained. The chain of events started on May 20 with footage of plainclothes police officers crushing demonstrators against a police bus and hitting a demonstrator’s head during a Pride event at Istanbul’s Bogazici University. In the next 40 days, similar scenes played all across the country. Police intervened in the Mediterranean town of Datca to prevent people from making speeches during Pride week. A dozen people were detained at the Aegean port town of Izmir’s 10th annual Pride march.

On July 5, police used tear gas and pepper spray to prevent LGBTQ activists from marching to Kugulu Park, a park at the heart of the embassy area, and reading a statement, organizers said. UniKuir, an Ankara-based group of LGBTQ+ activists, told Reuters that at least 36 people were detained. A small group of demonstrators who escaped both the police and a conservative group that held an anti-gay march on the same route read out their statement on the road leading to the park.

According to Yunus Emre Demir, one of the columnists for the LGBTQ rights platform Kaos GL, this one was one of Turkey's most challenging Pride months ever. “The government bans on one side, the threats of the nationalist and anti-gay gangs on the other side made any activity virtually impossible," Demir told Al-Monitor.

According to the Kaos GL’s count, approximately 500 people were detained at Pride events, a third of them in Istanbul. In the cities with liberal mayors from the political opposition, such as Istanbul and Izmir, governors stepped in ban LGBTQ events. In many of the towns of conservative central Anatolia, the bans were preceded by online attacks and petitions by various groups linked to right-wing parties who egged on the local authorities to stop what they called violations of Turkish culture. In Ankara, before the governor’s office made any statements on the Pride march yesterday, the youth branch of Yeniden Refah Partisi, a small conservative political party, tweeted their thanks to the governor for not allowing it. They held a simultaneous anti-gay rally on the same route to intimidate the Pride demonstrators.

But the largest crackdown came in Istanbul, Turkey’s largest city, which used to host the most colorful Pride marches between 2003 and 2015. On June 26, police attacked and arrested hundreds of people at the Istanbul Pride march. Journalists covering the event were first prevented from taking photos and, if they resisted, detained. Kaos GL said that 300 people were arrested.

The number of arrests was three times the total during the previous seven Istanbul Pride marches combined, ever since the government stopped allowing them in 2015, Human Rights Watch said in a statement last week.

“The Turkish government’s crackdown on Istanbul Pride is the latest in a brutal campaign against LGBT rights activism and freedom of expression,” said Kyle Knight, senior LGBT rights researcher at HRW. “Turkish authorities have a responsibility to protect LGBT people and journalists alike, but instead, the authorities have acted with aggression and cruelty.”

Against this background, Matiz’s latest hit was virtually lynched by conservative groups such as Misvak Caps, a pro-government humor magazine, which said that it would not “allow homosexuality to take root in Turkey.”

Matiz thanked the artists and human rights defenders who supported him with a tweet, saying their messages made him cry tears of joy. “Many stories, many things of love and life found expression in my songs and will continue to do so,” he said. “After all, everything passes, but … songs remain.”