When a member of Turkey's Olympic volleyball team faced online abuse after posting intimate photos of herself with a woman on Instagram, Turks of all stripes spoke up in her defense. 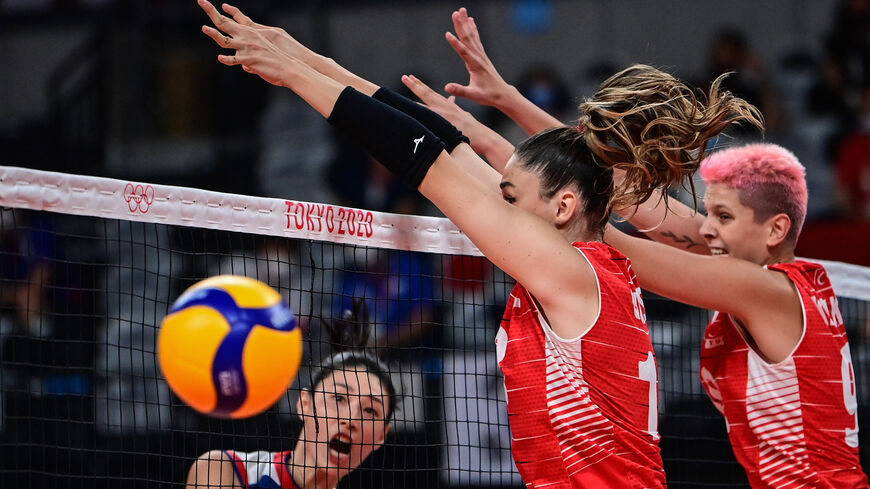 Turkey's Zehra Gunes (C) and Ebrar Karakurt (R) attempt to block a shot in the women's quarter-final volleyball match between South Korea and Turkey during the Tokyo 2020 Olympic Games at Ariake Arena in Tokyo on Aug. 4, 2021. - PEDRO PARDO/AFP via Getty Images

Homophobia has become a rallying cause for Turkey’s President Recep Tayyip Erdogan as it has for fellow populists — Hungary’s Viktor Orban and Poland’s Andrzej Duda — who also rely on polarizing issues to whip up support. However, in a stunning rebuke of the Turkish strongman’s anti-gay rhetoric, Turks of all stripes came out in defense of Turkish Olympic volleyball star Ebrar Karakurt when she faced online abuse after posting intimate photos of herself with a woman on Instagram.

Karakurt, a member of the “Sultans of the Net” volleyball team, helped Turkey’s national volleyballers reach the quarter finals of the Tokyo Olympic games. With her crop of hot pink hair and exuberant displays, Karakurt cut a colorful figure on court and has been widely praised for her prowess, bagging two silver medals in previous international tournaments.

The 21-year old opposite hitter has not commented on the attacks or on her sexual orientation, but she deleted the photographs that prompted the attacks from her account.

Her teammates showed no such restraint, tweeting messages of solidarity with Karakurt.

Naz Aydemir Akyol tweeted that Karakurt was focused on volleyball and that her personal life was “none of my business, or yours, or anyone else’s.” The tweet received over 89,000 likes.

“Always remain yourself, because the Ebrar we know is very special [and] is very beautiful,” chimed in Hande Baladin, another national squad player.

Turkey’s National Volleyball Federation stepped into the fray today — on Karakurt's side.

“Ebrar Karakurt is among the most important and promising players [in] Turkish volleyball,” spokesperson Kurtaran Mumcu said. “Everyone’s personal life concerns themselves alone,” he added.

while the world is filled with disgusting things our problem shouldnt be our national volleyball player being gay. thank you ebrar for the hard work that youre putting into our country. sorry for the uneducated people who are still living in the 80s. we love you. #EbrarKarakurt pic.twitter.com/CugzEHqSMS

Erdogan has taken to homophobic salvos of late and makes no secret of his disapproval for lesbians. “Let’s not dwell on what lesbians shmezbians say. Let us heed our mothers. The mother is the pillar of the family,” he said in February, at the height of mass protests over his appointment of a despised rector to Istanbul’s Bogazici University. Melih Bulu’s first order of business was to ban the university’s LGBT club.

Turkey’s interior minister has called gay people “perverts” and Gay Pride marches have been banned since 2016. Turkey’s withdrawal from the Istanbul Convention on combating violence against women, a document that was championed by Erdogan in his reformist days, was justified on the grounds that it somehow encouraged homosexuality. The anti-gay messaging is also being spread by the powerful State Religious Affairs Directorate. Its president, Ali Erbas, claimed in a sermon last year that homosexuality “brings disease in its wake and causes generational rot and decay."

Yildiz Tar, media and communication program coordinator for Kaos GL, Turkey’s oldest LGBT+ advocacy group, said she wasn’t surprised by the sea of support for Karakurt. “We have made huge strides. Turkey's society is far more accepting of the LGBT+ community but the government has fallen behind society and is persisting in anachronistic and homophobic policies,” Tar told Al-Monitor.

“Today, our association is able to organize events in the most conservative backwaters without facing a backlash. People no longer ask ‘what is LGBT’ but rather ‘how can we be of help?’” Tar said. This is in large part due “to the perseverance of the LGBT+ community, which is present everywhere, and is neither organized from a single center nor confined to any particular location,” Tar added.

The Sultans of the Net are no stranger to controversy. A popular theologian with orthodox views aired his disapproval over their attire last month, triggering a barrage of reactions both in support of and against him. “Daughter of Islam! You are the sultan of faith, chastity, morality and modesty … not of sports fields,” Ihsan Senocak tweeted to his more than 940,000 followers. “You are the child of mothers who are ashamed of so much as exposing their nose."

The government’s prudishness apparently knows no bounds. Turkish social media influencer Merve Taskin is facing obscenity charges for posting pictures of sex artifacts such as penis-shaped pasta she had purchased at a sex museum in the Netherlands last year. She is due to appear in court on Oct. 26 for violating article 226 of Turkey’s penal code, which says publishing  material deemed offensive on the internet is a criminal offense. If found guilty, Taskin could face up to three years in jail.