AKP municipalities tone down the volume on Kurd-Pop in Turkey

Cultural events, from Kurdish-language concerts to performances of daring female stars in mini dresses, become the targets of a proxy war between the nationalist-conservatives and liberals. 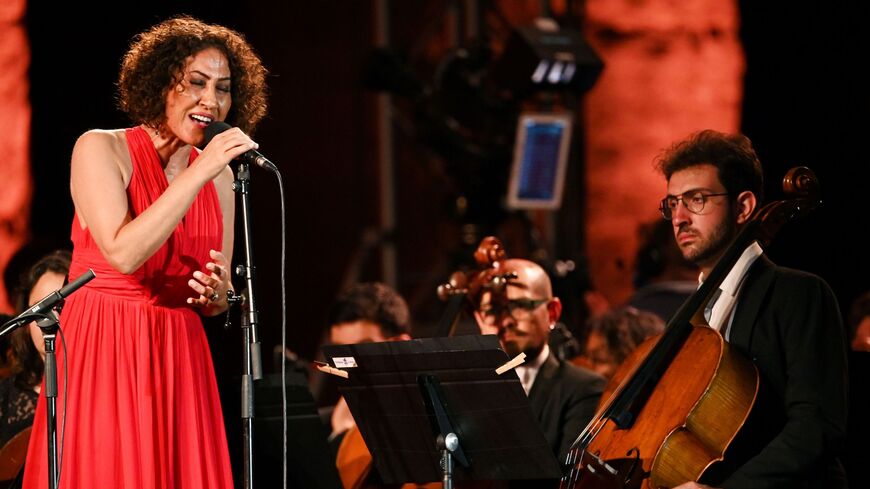 Kurdish singer Aynur Dogan (L) performs at the Paestum archaeological site in southern Italy, on July 5, 2020, prior to a concert of the Luigi Cherubini Youth Orchestra and nine musicians from the Syrian diaspora in Europe. - VINCENZO PINTO/AFP via Getty Images

“Please attend the concert of Aynur Dogan on May 28 in Istanbul,” Fazil Say, a prominent Turkish pianist, tweeted to his 650,000 followers. “No artist in Turkey should have to face archaic bans.”

Say was responding to increasing pressures on the Istanbul municipality to cancel the award-winning Kurdish-Turkish singer’s concert this weekend. The calls come from ruling party deputies, pro-government papers and threatening trolls, who accuse Dogan of supporting the outlawed Kurdistan Workers’ Party (PKK).

“We have five fallen soldiers today,” tweeted Alpay Ozalan, a backbencher of the ruling Justice and Development Party (AKP), in reference to the five Turkish soldiers who died in Operation Claw Lock against the outlawed Kurdistan Workers Party (PKK) in northern Iraq. “And the Istanbul municipality under the direction of [opposition mayor] Ekrem Imamoglu has announced the concert of a singer who opposes Turkey’s operation to the PKK.”

Aynur Dogan, a Kurdish Alevi singer who won the prestigious WOMEX 21 Artist Award last year, has been on Turkey’s agenda ever since the Derince Municipality, which is held by AKP, banned her concert in mid-May. Faced with attempts to portray her as a supporter of the PKK, she merely replied with a tweet: "Poets are those who prove the truth, and we continue on this path.”

Huseyin Celik, one of the founders of the AKP, defended Dogan and deplored both the cancelled concert and “efforts to lynch Dogan online.” Celik said that Dogan had often been an invitee of the Turkish government, which did not invite “artists close to the PKK.”

“Aynur sang in Kurdish at a concert to celebrate Istanbul as the European Capital of Culture in 2010… she is the voice and the pride of these lands,” he said.

President Recep Tayyip Erdogan, who got together with youth earlier this year in Diyarbakir, used Dogan’s famous song "Dar Hejiroke” (“The Fig Tree”) as backdrop.

After Derince, concerts on Dogan’s tour in Izmir and in Ankara, both cities governed by the opposition CHP, went on as scheduled. But even if a municipality raises no objections, the threat of the governor’s office hangs over artists and organizers. Governors, appointed by the Interior Ministry, have the power to cancel a concert or a festival, citing public security and they have been doing so for Kurdish concerts, though there are no legal bans on Kurdish music, plays or broadcasts.

In Bursa, organizers of a concert by Kurdish musician Mem Ararat announced that the May 29 event was banned by the governor’s office due to security concerns. In Mus, the governor’s office has cancelled a concert by Metin and Kerem Kahraman, a Kurdish duo. The Amed City Theater, which wanted to stage its play “Don Kixot” in Kurdish in the western town of Cayirova and leased a municipality hall for it, was told at the last minute that the hall was “no longer available.” Perwin Chakar, an internationally known Kurdish-Turkish soprano, bitterly complained that she had difficulty booking halls in Turkey if her repertoire contained Kurdish songs.

Peoples' Democracy Party (HDP), the largest political movement representing Turkey’s estimated 16 million Kurds and the third-largest party in Parliament, raised the canceled events in Parliament, saying that there were too many bans to be coincidental. “Is there a circular to governor’s offices and to AKP-led municipalities to ban such events?” Tulay Hatimoglu, the party’s Adana deputy, asked Interior Minister Suleyman Soylu earlier this week.

There are many interpretations on why the noose is tightening. One view is that the government, which is wooing nationalist votes, stifles Kurdish artistic expression as it prepares to close down HDP at home and battle PKK in northern Iraq and Syria. A second is that the ruling party simply dislikes gatherings.

“Concerts and festivals are areas where the outcry of the exasperated public cannot be suppressed, particularly if there is an artist with a critical voice on stage,” Helun Firat, the center-right DEVA Party’s deputy chair responsible for cultural policies, told Al-Monitor. "This is something [the government] cannot tolerate."

Firat said while Aynur Dogan and other Kurdish artists have taken the main hit, they are far from alone. “Others, the singers who wear a mini dress, or express a critical opinion or have a lifestyle different than what the government subscribes or portrays as ‘the other’ also come under fire,” said Firat, the fourth generation of politicians in a Kurdish family.

“Given the general atmosphere of intolerance in Turkey, the deep-rooted mistrust of minorities and their cultural expression, … the Aynur Dogan concerts have become a proxy war,” said Berk Esen, an assistant professor of political science at Istanbul’s Sabanci University and IPC-Mercator fellow at the German Institute for International and Security Affairs.

But, insists Esen, this proxy war is not merely between the government and the opposition. It also involves the sectarian, anti-Kurdish, anti-minorities strain both in government and in the opposition. “This group is seeking to push the opposition to the right, trying either to silence moderate politicians and opinion leaders or demonizing them,” he told Al-Monitor. In many of these online battles, provocative hyper-nationalist Umit Ozdag, whose ultra-right Victory Party brought its vote to 4.7%, is a strong instigator.

On May 26, Isparta Municipality, which is run by AKP, announced that it had cancelled musician Melek Mosso’s concert in the city’s Rose Festival. The cancellation followed a steady flow of tweets by various conservative groups who called for banning the artist — a similar strategy to the ban of the traditional Anadolu Fest in Eskisehir earlier in May.

The National Youth Foundation and the Anatolian Youth Association, affiliated to the Felicity Party, a member of the opposition’s six-party coalition, released a statement asking why “the taxpayer’s money should be spent on shameless so-called artists” as their supporters  kept posting a video clip of Mosso telling women to be independent, do whatever they pleased and giving the middle finger to those who told women otherwise. After the cancellation, the two groups thanked the municipality for respecting moral values.

Mosso reacted immediately. “It is not a bunch of heedless people who will judge my morality,” she tweeted. “I am a woman of this country who will continue on my artistic path. I have no doubt that one day, I will go to Isparta and sing my songs.”

Women’s groups and artists rallied to her side. Fidan Ataselim, the secretary-general of award-winning We Will Stop Femicides Platform, said that “immorality” was used as an excuse to ban concerts, kill women or even attempt to close down her platform. “We will fight against this, stand with each other and sing our songs,” she tweeted.

“The cancellation of concerts in AKP-run municipalities represents an extension of the local politics of authoritarianism we’ve already seen in the removal of dozens of democratically elected HDP mayors,” Lisel Hintz, the author of “Identity Politics Inside Out: National Identity Contestation and Foreign Policy in Turkey, told Al-Monitor. “The rhetoric used to paint artists — especially women — as immoral and to associate Kurdish artists with terrorism reflects the identity politics of a hyper-masculine nationalist populist regime intent on marginalizing opposition of all forms.”