Aynur Dogan gets Americans to sing her tune

"In the US, unlike Europe, many in the audience heard Kurdish music for the first time," says Aynur Dogan, a Kurdish-Alevi musician from Turkey, after her tour. 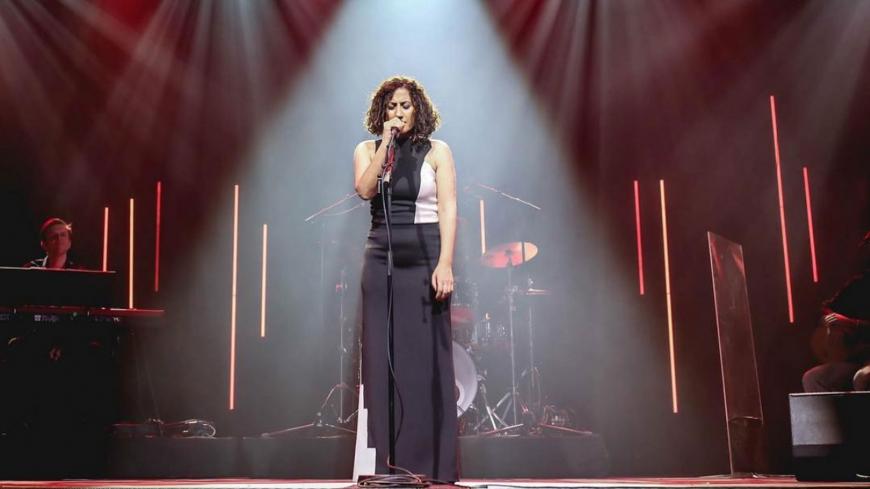 Kurds are by now a part of the American political news, but their place in America's cultural news is limited and few Kurdish singers are known there. Last month, music lovers in New York were introduced to Aynur Dogan, a Kurdish Alevi music diva from Turkey — and one of Al-Monitor’s list of 50 people shaping the culture of the Middle East — who completed her Sept. 14-30 US-Canada tour with a concert in New York.

The tour included various US cities in California, Indiana, Iowa, New Mexico and Wisconsin, and in Ontario, Canada. Dogan, known as simply “Aynur” to her fans, was accompanied by a group of musicians from Syria and Azerbaijan, as well as a German-born Turk. During and after each of her concerts, fans would post short clips, photos and praise on different social media platforms expressing how impressed they are with the Kurdish tunes.

“It was a crucial tour that brought Aynur and her trio to diverse American audiences, including college students and art circles. Kurdish music, specifically Anatolian and Alawite music, reached a global audience through Dogan’s emotion-laden voice,” Mutlu Civiroglu, a Washington based Kurdish affairs analyst, told Al-Monitor at Aynur’s New York concert. Citing “Rewend” (Nomad) as his favorite song, Civiroglu pointed out that fans waited in the cold just to get a glimpse of Dogan.

Another fan who attended the concert was 78-year-old who gave her name only as Hatice from Diyarbakir, who has been in self-imposed exile in the United States for the last 58 years. She said, “Today, for the first time in the United States, I felt my roots. The scent of the home I was born in, the colors of the town [Diyarbakir] I grew up in all came back to me. I cried with happiness. A woman’s voice singing our stories in our language 20 minutes away from my house.”

Hatice said that when she left Turkey, it was illegal to sing Kurdish songs in public. “This music has been with me all my life; now, Aynur has made it all come full circle. I am Kece Kurdan [the name of a song meaning “Kurdish Girl” in the Kurdish language of Kurmanji,” she said.

Fifteen months after “Kece Kurdan” was released in 2004, a Diyarbakir court banned the album, saying that the lyrics of the title song had encouraged separatism, though the decision has been annulled a few months later. The album was the third released by this young singer from Cemisgezek, an obscure village in the southeast Anatolia. Aynur had studied music in Istanbul. The controversy got her a significant amount of attention both in the Turkish press and the global press. Aynur’s photo was also on the cover of a supplement in the "The Times" on March 21, 2005, issue, with the headline “The Cultural Wealth of Turkey.”

Modest, straightforward and warm, Aynur told Al-Monitor over the phone that she felt sorry that her whirlwind tour in the United States could not include more cities, but she was delighted with the audience’s reaction.

“My audiences all around the world share similar qualities; they are receptive and accustomed to global tunes. We share the same emotions; gathering us together from such far corners of the world is art. That is the power of music,” she told Al-Monitor by phone. “What is unique for the audiences in the United States is that you get people from all nations [and] ethnicities. While on stage, we realize that all of the world’s populations can live together; they can sit down in the same room and share the same emotions. There were scores of people who drove for 12 hours or took a plane.”

Multicultural musicians accompanied Aynur to the concerts. Piano player Salman Gambarow, who lives in Azerbaijan, has been performing with Aynur since 2012. “He is a unique jazz pianist but also is so familiar and open to the music and tunes of the east,” said Aynur.

Tanbur player Cemil Qocgiri is from a Kurdish-Alawite family from Turkey, but he was born and raised in Germany. Aynur said that he was like a bridge in the sense that he could “get together and work with diverse groups of musicians from all cultures.”

“His music’s reach is clean, minimalist, patient and relaxing. The connection between each note he plays and his feelings can be felt clearly. Hence it is rather mystic. He is a valuable musician with important albums and projects — particularly on the Zazaki language [which was classified by UNESCO as a language threatened with extinction],” she added.

For the New York City concert exclusively, she was joined by clarinet player Kinan Azmeh, a native Syrian who is based in New York.

“In the United States, most of the audience listened to me live for the first time; frankly, there were quite a few who have never heard Kurdish music before the concert,” explained Aynur, when asked to compare the American audience to Europe, where she has given many concerts. “In Europe, there are many people from Turkey who are familiar with Kurdish, Turkish music and culture. Fans in Europe come to concerts to enjoy the show; they know the songs and most likely they are repeating audiences who have already watched my performances,” she said.

But Aynur is no totally unknown in the United States, where she gave concerts before. In 2017, she was given Berklee College of Music’s Mediterranean Music Institute Award, which did not only cast the spotlight on the young singer but on Kurdish music as well.

“[Kurdish music] is not a well-known genre, like Fado or Flamenco. But it is not a music that people view as alien neither. When you bring together an elderly Spanish flamenco singer along with dengbej ("bard" in Kurdish), there are so many similarities in their music. Even their intonations are not that different,” Aynur said.

Asked about the difficulties in the use of the Kurdish language in Turkey, Aynur said, “Kurdish music has experienced similar problems at all times. We had a few relatively better years, but it was never easy to hold concerts or appear on television or radio. Kurdish performers did not receive much in government support, so whatever they achieved they did it by their own means. This is not unique to Kurdish music … it can be seen in other ethnic music as well.”

But she expressed faith in the oral tradition for Kurdish music. “It is rather strong; that is why, despite all pressures, it has survived up to today. The more art, music gains strength and the more it produces [in any language], it will be able to resist assimilation and bigotry. Music is like a medicine and above all identities,” Aynur concluded.

Correction: Oct. 24, 2018. An earlier version of the article incorrectly said that the ban on Aynur Dogan's "Kece Kurdan" was lifted in 2015.