Aspiring to connect between Israeli and Arab residents, the municipality of Jerusalem promotes a new program that will teach school pupils not literary Arabic, but the spoken one. 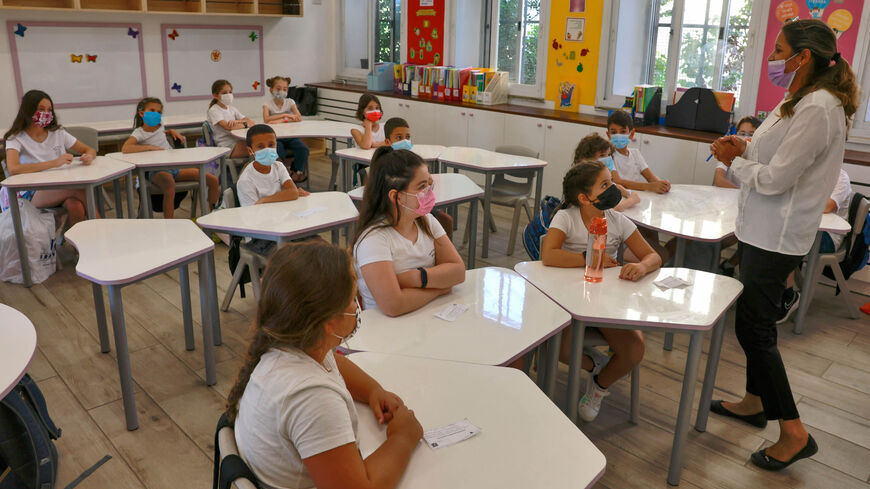 An Israeli teacher welcomes pupils wearing protective face masks upon their return to the new school year amid a surge of coronavirus cases in Israel, at Beit Hakerem Israeli elementary school in Jerusalem, Sept. 1, 2021. - Menahem Kahana/AFP via Getty Images

The Jerusalem municipality prepares to launch next week, as the school year begins, a new curriculum called "Ahalan" to teach schoolchildren in Jewish schools in the city spoken Arabic.

The curriculum, put together by the municipality's education administration, came into being in order to shed a positive light, create a connection to the Arabic language and thus connect East to West Jerusalem by giving children the tools to communicate. The curriculum's emphasis is on spoken rather than written Arabic, in contrast to many Arabic-language curricula for Jewish schools.

The idea is that teaching spoken Arabic would create a way to communicate between the city's Jewish and Arab residents. This is a city that is on paper united but in actuality has never been; there is a disconnect between the east of the city and the west, and tension between Jewish and Arab residents is always present and can blow up at any given moment. An example can be seen in the attack of two Arab light rail conductors by Jewish teens last month or the attack on Jews by Palestinians at the tomb of Samuel north of the city.

In recent years, the Arabic language has hardly been studied in Jewish schools. The Ministry of Education admitted at the beginning of the year that about a third of Jewish middle schools do not fulfill the requirement to teach Arabic, and that in the past five years there has been a decline of about a third in the number of Jewish students who take the matriculation exam in the Arabic language.

If Arabic is taught in schools it is taught at an older age, with a focus on literary Arabic, which makes it hard for Jewish students to later communicate with Arab citizens and residents in Arabic. This is the complete opposite for Arab students who start learning Hebrew in the early grades of elementary school, which later allows them to communicate at a high level with Jewish citizens in Hebrew.

Further proof for the sad state of Arabic in the State of Israel could be seen in the legislation of the Nationality Law in 2018, which lowered the status of Arabic from an official language of the State of Israel, equal in status to Hebrew, to "a language with a special status." In 2019, the Ministry of Education made sure to update civics curricula to teach students preparing to matriculate that only Hebrew is the official language.

The new curriculum produced by the Jerusalem municipality started last year as a pilot project at 21 schools in West Jerusalem, and was taught by 12 Arab university students from East Jerusalem, most of them education majors. In exchange for a scholarship, they taught 120 hours annually, four hours a week, it set classrooms throughout the city. Toward the new school year, 30 schools signed up for the spoken Arabic curriculum for grades 5-8, which will be taught by 50 Arab students.

The curriculum was written by the Madrasa organization and the "Common Study" program that works on joint learning for East and West Jerusalem. The students teaching the curriculum are trained in tools to teach in the classroom and are closely supervised throughout the year.

In order to ensure the program's success, the municipality gave participating schools flexibility to choose a curriculum tailored to their school environment, with experiential learning through songs, games and more. The understanding is that it is important to know the language of "the other" since it is an important tool to break down walls between the populations and create an atmosphere of a shared life.

Jerusalem's mayor, Moshe Leon, has praised the curriculum. The municipality spokesperson’s office told Al-Monitor, "The Arabic language is one of the most spoken languages in the world, in Israel, and in our city Jerusalem. By learning it students can get to know a rich history and culture, and especially to speak and to create productive dialogue."

What do the curriculum designers and participants think about it?

Nebal Obeidat, a teacher who participates in the project, told Al-Monitor, "Through the program I see the connection between the East and West, within my classroom. My students and I go on a journey to the Arabic language and culture, with an emphasis on connection to real life — so that the spoken Arabic they learn could be used in everyday life. I believe that every teacher has an impact on her environment and students, and with cooperation we can do anything."

Art teacher Ayelet Yamin, who is the project's coordinator at the Keshet Talpaz school, said, "The uniqueness of the Ahalan curriculum is not only learning a language that surrounds us in everyday life, but also getting to know a language as well as culture that is thought to be threatening, that can become a resource with the potential to get to know the other, to understand the Arabic language as identified with a society and culture. In this way we can try to advance and grow a society that upholds the values of coexistence, tolerance and mutual respect between the two peoples."

Hence, the curriculum's emphasis is on the principle of getting to know the other.

This is a principle that is also espoused at the Tali Geulim school in Jerusalem, as the project's coordinator there, Dana Gerson, noted, "As part of the school's world view, which advances a shared life, our students meet and enrich their knowledge of their world with another culture and language that they encounter regularly by being Jerusalemites. This is a process that succeeds in breaking down walls and bringing people closer with the hope that what begins with children will influence the adult world in the future."