Schools in Syrian regions controlled by the Kurdish PYD and its allies are for the first time teaching the Kurdish language, a practice prohibited under Baathist rule. 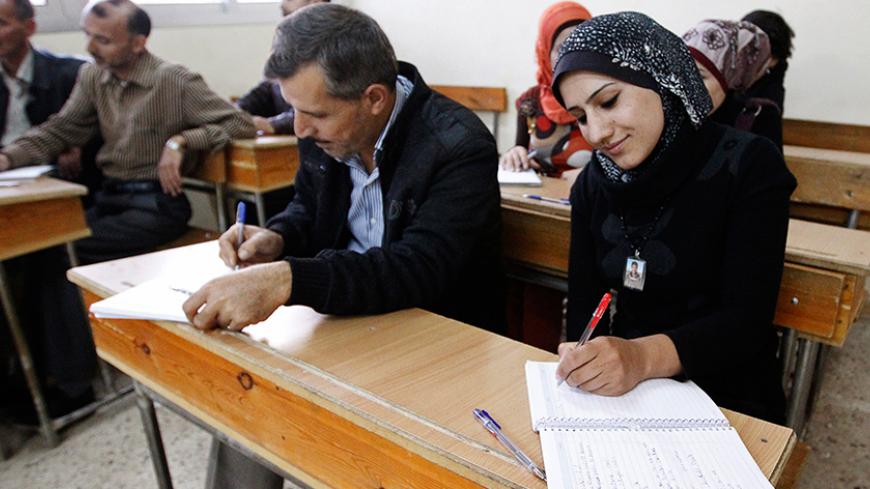 DARBASIYAH, Syria — When children enrolled for the 2015-2016 school year in areas of Syrian Kurdistan controlled by the Democratic Union Party (PYD) and its allies, the new curricula and educational system surprised many residents. The autonomous government in western Syria had in 2014 made the decision to teach the Kurdish language in schools. Thus Kurdish was added to the curricula for grades one through three, and Kurdish was designated a language of instruction in the other grades. It is an unprecedented step, as under Baath Party rule, Kurdish had been banned in Syrian schools since 1963. Teaching Kurdish was forbidden, and anyone caught teaching it faced arrest.

The decision to adopt Kurdish in schools was rejected by some residents, including Kurds. Those opposing it consider the measure a partisan effort that is not beneficial in the educational system and claim it could lead to a drop in attendance.

In 2014, governing authorities in the Kurdish areas secured funding for printing books to teach Kurdish, training teachers and developing a professional staff to oversee children’s education. Authorities believe that teaching children their native language is essential to creating a generation that loves its homeland.

Akram Hissou, chairman of the Executive Council of the Democratic Self-Management in al-Jazeera province, told Al-Monitor, “Teaching the mother tongue in schools is a form of practicing cultural rights. These rights are a priority in practicing democracy in any country. When the Democratic Self-Administration decided, via the education committee, to teach the curricula in the mother tongue as well as Syriac and Arabic, it created an opportunity to teach in different languages for the purpose of applying democracy and preserving the heritage of all of Rojava’s [Syrian Kurdistan's] coexisting components.”

Hissou added, “We, as a the general coordination [directorate] for the Democratic Self-Administration in Rojava, decided to support the decision with all available means. We will not back down because the ability to apply democracy is in line with Rojava’s decision. The Democratic Self-Administration has the potential to build a new Syria, a united federal Syria for everyone. Thus, we would be able to apply democracy on all Syrian territories.”

Before the outbreak of the revolution in 2011, Syrian minorities, including Kurds, Assyrians and Turkmen, were only taught Arabic in schools, to the exclusion of their mother tongues. Mezkin Ali, a Kurdish student currently learning the Kurdish language, plans to become a teacher so she can instruct others in the language. She told Al-Monitor, “In the past, we were not allowed to speak our mother tongue among each other as students. The current situation is like a dream for many Kurds. I am really happy to learn my mother tongue and teach it to my Arab friends who don't know it. This way we can understand each other when discussing life.”

The Democratic Self-Administration is training staff in early childhood education. The Syrian government has yet to approve this decision, and Kurdish political parties disapprove of it, but the autonomous government is nonetheless moving forward.

Sozdar Mohammad al-Mohammad, a member of the Kurdish language movement and a supervisor for the Kurdish education sector who studied at the Faculty of Sociology at the University of Tishreen, told Al-Monitor, “Despite the difficulties we are currently experiencing, we are certain that success is ours, because we have enough staff to teach the Arabic and Kurdish languages ​​in primary and junior high school, especially since some [instructors] have finished their academic studies in both Kurdish and Arabic, and a lot of teachers have completed their university education in Syria in all specialties.

“We have developed a training system for education in our areas, by virtue of a decision made during the conference held in Rojava, Kurdistan, on Aug. 25, 2015. All Syrian components, Arabs, Syrians and Kurds, accepted it. The decision stated that every component has the right to teach its mother tongue from the first to the third grade. We are working for all our children and all components. This is why we allocated teachers who have completed their education in Syrian universities for Arab children who do not speak the Kurdish language. Those teachers were appointed by the schools’ administration committee,” she added.

Some view the change in teaching methods and curricula in Syrian Kurdistan as part of the beginning of the division of Syria, while those who oppose the new curriculm speak of a Kurdish occupation. The residents interviewed by Al-Monitor said they would make the greatest effort possible to teach their children their native language. This will allow young Kurds to draw on both Kurdish and Arabic terms as their vocabulary requires in everyday life.