School curriculum remains the prime concern of parents in Syrian Kurdistan areas under control of the autonomous administration. 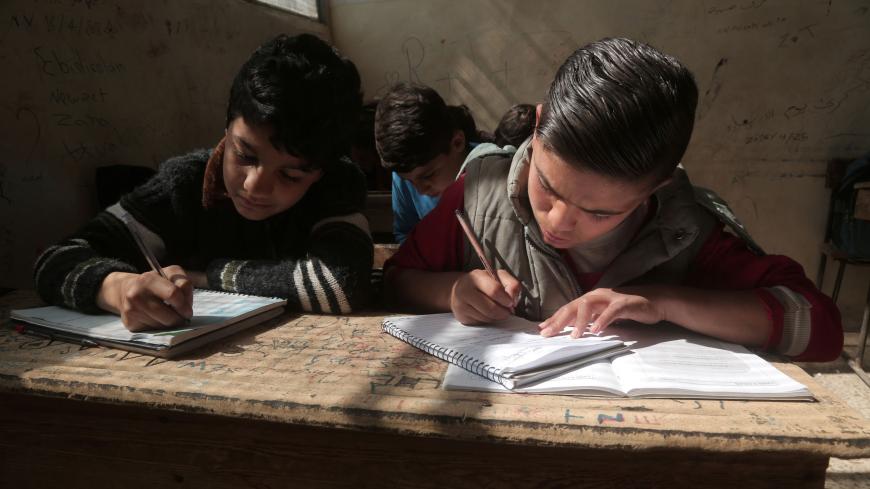 Amid repeated school closings and reopenings in the Kurdish-led autonomous administration of north and east Syria (widely known as Rojava), the Kurdish language is now being taught in most parts of the Jazira region. However, going down that particular road was — and still is — complicated, to say the least.

In 2012, after the Kurdish Language Institute decided to teach Kurdish in schools across Jazira, the Ministry of Education affiliated with the Syrian regime shut those schools down. The Kurdish nationalist Democratic Union Party (PYD) then had the doors broken down to keep giving Kurdish lessons.

The two sides subsequently agreed that three Kurdish courses per week would be taught to ninth-grade students and five courses to seventh- and eighth-grade students instead of Arabic, computer, social sciences and science courses.

In 2015, the Kurdish-led autonomous administration replaced the Syrian regime's primary education curriculum with its own in the areas it controlled. This led the regime's Education Ministry to prevent its teachers from cooperating, causing primary education courses to be suspended. Meanwhile, schools in areas under regime control taught classes as usual.

Also in 2015, the Rojava administration developed the Democratic Society Education System, which includes educational bodies in the area, the Kurdish Language Institute, and Kurdish teaching academies and institutes.

This system is in place across the autonomous area. Its basic principle is that Arabs should learn Arabic during the first three years of school, and Kurds should learn Kurdish. Based on the system, a local language is introduced in the fourth grade.

The course, called National Education, has been abolished under this system and replaced by the Democratic Nation course. In addition, geography and history courses have been adjusted, and the Islamic Education course was replaced by one called the History of Religious Beliefs. As these courses are taught in Kurdish, this has affected the Kurdish students' Arabic skills.

Of note, these curricula are taught only in public schools — not private schools affiliated with religious institutions.

The Rojava administration in 2015 began imposing its curriculum on primary classes only, but it is expanding the courses to some secondary students beginning this academic year and will add others for 2020-21.

The autonomous administration imposed these curricula on Kurdish families as well as a small number of Arab and Syriac students whose parents work for the administration. Many oppose the curriculum and have refused to comply.

Rojava school diplomas are not recognized by any higher educational institution.

Al-Monitor met Aug. 3 with Samira Haj Ali, co-chair of the Education Authority in Rojava, who said the people's recognition is what matters the most.

“A lot of significant countries and universities are visiting us, which is a kind of recognition. We shouldn't wait for people to come to us and say they recognize us. Real recognition emanates from those involved,” she added.

Shatha al-Wafi is a second-grade preparatory student who used to attend the Suez Canal Middle School in east Qamishli. Even though she lives very near the school, her parents refuse to send her there, so now she travels a long way to go to a regime school instead.

“I don't understand my courses [because] there are a lot of students in class and the noise is annoying. But my father tells me, 'What's important is to get a recognized diploma regardless of the hardships.' I want to complete my studies at the University of Damascus, which is an ancient and recognized university,” she told Al-Monitor.

Fred Saadoun, who has a doctorate in Arabic literature, told Al-Monitor, “The educational system is part of the state system. It is subject to a specific law and a clear constitution set by the state. There is a law in each state that regulates the education process based on a specific format.”

Saadoun said legitimacy is key to preserve the future of students.

“The curriculum is valid as long as the state is valid, legitimate and recognized. When a state, an area or a system is no longer recognized, the curricula and the diplomas become unrecognized, and students lose the right to go to university to complete their studies. In other words, the future of the region in northeastern Syria is vague and not clearly defined, and no university recognizes the autonomous administration curriculum.”

But a source in the regime's Education Ministry questioned those figures and told Al-Monitor on condition of anonymity that many schools under the auspices of the autonomous administration are actually teaching the regime curriculum.

The source added that because it's difficult to accommodate all the students who want to attend regime schools, the regime has turned some government centers into temporary schools in Qamishli and Hasakah "security squares" — areas protected by the regime where security and military institutions and schools affiliated with the regime can be found.

Classes designed for 30 or 35 students are accommodating as many as 80, despite an increase in the number of dropouts, which was 161,600 in 2018. That figure is likely to increase this year, the source said, adding, “Students in regime schools located in security squares and areas under the control of the regime amount to approximately 496,400 in total.”