The Nationality Law, adopted this week, strips Arabic of its status as Israel’s second official language. 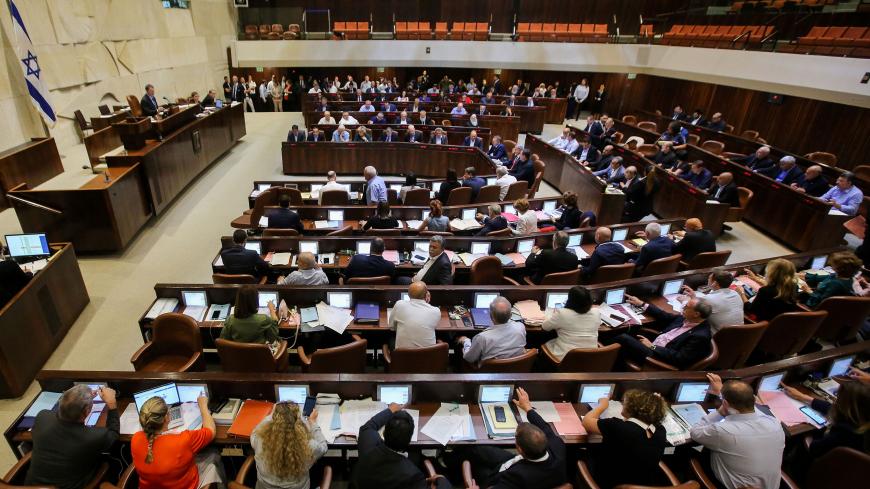 Israeli members of parliament attend the Knesset Plenary Hall session ahead of the vote on the Nationality Law, which speaks of Israel as the historic homeland of the Jews and says they have a "unique" right to self-determination there, Jerusalem, July 18, 2018 - MARC ISRAEL SELLEM/AFP/Getty Images

Following a protracted debate into the early hours of July 19, Israel’s Knesset gave final approval to the Nationality Law, a controversial bill that anchors Israel’s status as the nation-state of the Jewish people. Following the bill’s passage, Prime Minister Benjamin Netanyahu said, “One-hundred twenty-two years after [Theodor] Herzl made his vision known, with this law we determined the founding principle of our existence. Israel is the nation-state of the Jewish people and respects the rights of all of its citizens. … In the Middle East, only Israel respects [rights].” Netanyahu went on to say, “Today we made it into law: This is the country, the language, the anthem and flag.”

During the stormy debate, Knesset members of the Arab Joint List party tore up copies of the bill and were expelled from the plenary.

The bill’s various articles that give priority to those who are Jews also strips the Arabic language spoken by 20% of Israeli citizens of its official status. Article 4 of the law says Arabic will no longer be the country’s official second language, as it was since the early years of the state. Instead, it grants Arabic “a special status in the state” and stipulates that the de facto status enjoyed by the language before the bill was passed must not be disturbed. The law, however, does not explain what the “special status” means and how this unique status will be implemented.

“Language is a bridge, a tool for getting to know the other, a way to get to know a culture,” Knesset member Ahmad Tibi of the Joint List said in an interview with Al-Monitor. “Language is a way to break down the walls of hatred, but Benjamin Netanyahu insists on building these walls as high as possible.” Tibi also said he had reached an agreement with the government coalition parties, including the ultra-Orthodox Yahadut HaTorah and Shas, the center-right Kulanu and even the rightist Yisrael Beitenu, on removing this article, but realized that Netanyahu "had gotten up on his hind legs and was protecting the article zealously."

Not only the 13 Arab lawmakers of the Joint List and the 42 other opposition legislators who voted against the law think Israel is turning into a nationalistic, introverted state uninterested in providing its citizens with the tools to get to know their neighbors and bridge the divides among its residents. Arabic language teachers say that in recent years, Jewish high school students are not interested in learning the “language of the enemy,” as they call it. M., a teacher in northern Israel, tells Al-Monitor on condition of anonymity that during the lengthy discussions of the proposed legislation, Arabic language teachers wanted to send a delegation to speak with Education Minister Naftali Bennett, one of the bill’s most ardent supporters, but a meeting did not pan out.

Paradoxically, in a circular sent to schools July 9, the office of the Education Ministry’s director-general wrote, “Knowing the Arabic language is of great importance in the State of Israel.” The document further stated that studying Arabic “allows us to understand the Arabic-speaking Israeli citizens, to communicate with them and to get to know their culture and that of the citizens of the Middle East, most of whom are Arabic speakers. Knowing the Arabic language is essential to the state and even contributes to its citizens.”

However, these are hollow words. Arabic is available as an elective subject for fifth- and sixth-grade students at a level of two hours a week; in junior high school, students can choose between Arabic and French as a second foreign language after English, with most opting for French. Students can choose to take Arabic in high school, but only if they intend to matriculate on an advanced level — which means five weekly hours over three years.

In other words, no effort is made to spur Jewish school students to learn the language described by the Education Ministry’s circular as being “of great importance to the state.”

M., the Arabic teacher, is up in arms against what he describes as the Knesset’s “lack of understanding of the importance of language … even when they talk about giving it special status, they are actually adding another obstacle to what we already see on the ground. A clear lack of interest on the part of the education system in Israel, inspired by the higher-ups, to endow its citizens with the Arabic language.” The ministry does not have any data about the number of Jewish children studying Arabic, he says, “probably because it is not interested in knowing." The ministry “cares more about teaching Torah and Judaism, even enriching such studies, and ignoring other subjects that could enrich the young generation, such as science, a foreign language and more. Very few students go to school knowing clearly that they want to learn Arabic. Their environment does not support the language. If there are students who choose the language it is mostly because they come from a home with a heritage of a culture they know and want to get to know better.”

According to data from the 2011-2012 social survey conducted by the Central Bureau of Statistics, only 8.6% of Jewish Israelis have a basic command of Arabic — 18% of whom studied it in school.

Another group of Israelis who study Arabic are talented youngsters handpicked to serve in military intelligence units. The Israel Defense Forces identifies them before they are drafted into compulsory service and trains them in Arabic proficiency on a mother-tongue level, in addition to teaching them about Islam and Arabic culture.

The author of the Nationality Law, Knesset member Avi Dichter, chair of the Knesset’s Foreign Affairs and Defense Committee and previously head of the Shin Bet, acquired the language during his long years with the agency. All those working for the agency speak what is known as “Shin Bet Arabic,” having all studied it at the same place and learned to pronounce it the same way. On the observance of the first Arabic Language Day in 2016, Dichter addressed the Knesset and directed a message to the Palestinian residents of Gaza in their language. On June 5, Dichter took the Knesset podium, turning to his fellow parliamentarian Ayman Odeh, head of the Joint List party, to mock him in his own language. “We don’t want your wool nor the meat of your sheep; simply get out of our face,” he said to him, using a well-known Arabic proverb. That probably says it all.