All the initiatives and events presented on Arabic language Day in the Knesset cannot hide the fact that the Nationality Law has stripped it from its status as an official language in Israel. 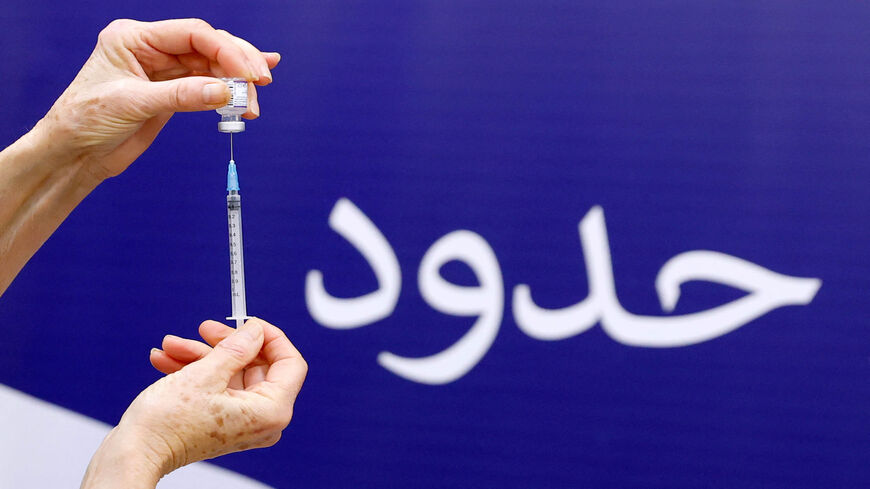 An Israeli nurse prepares a dose of the Pfizer-BioNTech COVID-19 coronavirus vaccine, with Arabic writing in the background showing the last word of the slogan, "Hope without limit," at the Sheba Medical Center, Ramat Gan, near Tel Aviv, Israel, Dec. 27, 2021. - Jack Guez/AFP via Getty Images

The Knesset marked its seventh annual Arabic Language Day Jan. 25 with special discussions and debates devoted to the topic in the various committees. Participating committees included the Internal Security Committee, Committee for the Advancement of the Status of Women, Finance Committee, Education Committee and the Constitution, Law and Justice Committee.

In a discussion about the initiative, the Knesset’s director general (mudirh a’am al-Knisat in Arabic) explained, “This is an important move, intended to help notify and inform all citizens about the parliamentary activity of their representatives. Language is the most basic, most important medium for communication between people. As such, this initiative is the best way to relay a message about the importance we place on accessibility and familiarity with the Arabic language in general and in the Knesset in particular.”

In a meeting of the Constitution, Law and Justice Committee, the overall status of the Arabic language was debated. During that session, the committee’s chairman, Knesset member Gilad Karib of the Labor Party, announced that he is considering the creation of a new subcommittee on the status of Arabic and the implications of its status on legal matters.

Also last week, Knesset members Ahmad Tibi and Osama Saadi, both of them from the Arab Joint List, proposed legislation to restore Arabic’s status as an official language. Meanwhile, the Knesset Channel on TV decided to share a number of tweets in Arabic on its official Twitter account. These were marked with the hashtag #ArabicDay, and included translations into Hebrew.

Arabic Language Day was a 2016 initiative by former Knesset member Yousef Jabareen of the Joint List. The motivation behind it was an attempt to promote awareness of the Arabic language among Knesset members from all the various parties. At the time, Jabareen stated, “We need to educate the Israeli public that the Arabic language is the language of the neighboring space, the region and of 1.5 million Arab citizens who are supposed to have equal rights in the country.”

He continued, “Even among Jews, this is the native language of many of their parents. I believe that the promotion of this language in order to bring people closer together is a worthy goal.”

This was exactly the point raised by Arab Joint List Chairman Ayman Odeh in his address to the Knesset on Arabic Language Day. He began by noting, “Arabic is the mother tongue of some 60% of the country’s citizens.” He then addressed the members of the [religious-Mizrahi] Shas party in particular, saying, “People who are sure of themselves, their history, their culture and their heritage have no reason to fear. If anything, they should see this other language as an added value that contributes to and enriches them.”

In response, Knesset member Moshe Abutbul of Shas offered support for Odeh’s remarks by saying, “I had the privilege of growing up in a home in which they spoke Arabic. My father was from Morocco and my mother was from Tunisia. I learned the language from them, so that I now have a rich Arabic vocabulary.” He continued by discussing the good relationship between Jews and their neighbors in the Arab states, noting, “The Mizrahi Jews of Morocco, Tunisia, Libya, Algeria, Yemen and Syria had a wonderful relationship with their Muslim neighbors. They admired and respected Jews and Judaism throughout most of the years they lived together in the lands of the Diaspora.”

Nevertheless, despite all the events, initiatives and positive remarks raised during Arabic Language Day, it is important to remember that the status of the Arabic language suffered severely in July 2018 under the Netanyahu government. That government initiated the Nationality Law, which determined that Arabic would no longer be considered an official language in Israel. Instead, it was demoted to a language with a “special status.” So, for instance, in 2019, the Ministry of Education was quick to notify teachers of civics courses that from now on, they must teach their students that Israel’s only official language is Hebrew, in accordance with the Nationality Law, while ignoring Arabic and its “special status.”

As if that was not enough, Tibi revealed last week that at the time, he appealed to the Constitution, Law and Justice Committee to reconsider the removal of the part of the new law that addressed the Arabic language, only to be told — apparently by associates of Netanyahu — that it was put there explicitly at the order of Netanyahu. Upon looking further into the matter, he learned that “Netanyahu sees Canadian Prime Minister Justin Trudeau, who is expected to address his country in its two official languages [English and French]. He does not want Israel to be like that, so he removed Arabic as an official language.”

With Netanyahu and the Likud now in the opposition, Chairman of the Likud’s Knesset faction Yariv Levin took the opposite tack by proposing legislation that would mandate the teaching of Arabic in Israeli schools. The law failed to pass because the coalition opposed it. In response, Levin, a fluent Arabic speaker, scolded the coalition’s Arab Knesset members in Arabic for voting against the law. Arabic, the native language of a significant number of Israelis, had suddenly become a weapon to attack political opponents, rather than a tool to help the different sectors of Israeli society communicate and become better acquainted.