Shady Khalloul Risha talks to Jacky Hugi about his quest to revive the Aramaic language and recounts the struggle of the Maronites in Israel to be recognized as an ethnic minority. 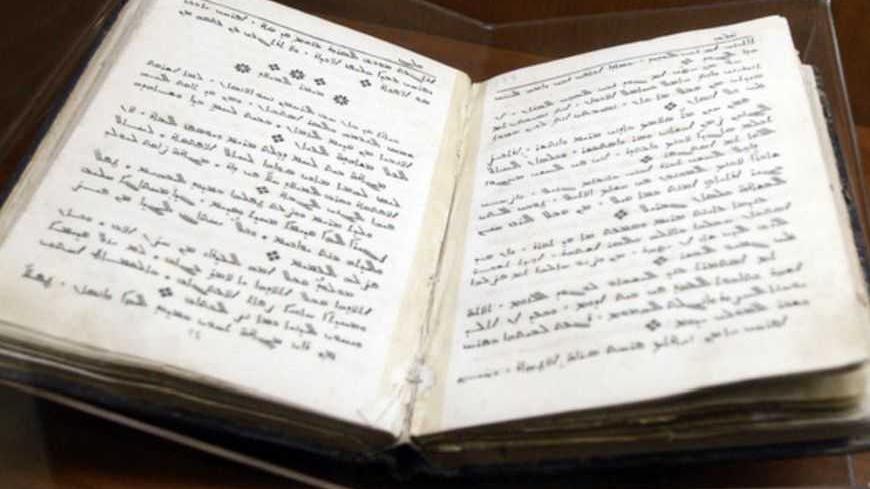 A book written in Aramaic is seen in a glass case at the Museum of St. George's Catholic Church in Kormakitis, Cyprus, May 9, 2010. - REUTERS/Andreas Manolis

Shady Khalloul Risha holds his son Aram in his lap and speaks to him in a language that most Israelis are familiar with, but which only a few understand. The child responds the way children aged three and a half do. Shady is proud of his firstborn; Aram is really a special child. At home, in the village of Jish (Gush Halav), not far from the Israeli-Lebanese border, the infant has been exposed to three languages from birth. His father speaks to him in Aramaic. His mother, born in Ukraine, chats with him in Russian. And his grandparents, Shady's parents, address him in Arabic.

“I am a Maronite; the language of my ancestors is Aramaic,” Shady says, “and I want to resurrect it. Rather than telling others to do it, I decided to revive the language in my own home. I speak to him in Aramaic, and he replies in the same language.”

Isn’t it important to you to teach him Hebrew, the majority language?

“Sure, but he will learn it anyway; it will happen by itself. After all, he is growing up in Israel. English, too, he will learn by himself when he grows up. His brother Jacob is eight months now, and we are doing the same with him. In a few years, the two of them will be communicating in Aramaic.”

Aramaic is the second language after Hebrew used in the Jewish scriptures. It is the language the Kaddish (sanctification) prayer is written in. It is also the language of the Talmud and used extensively in the Bible, especially in the books of the prophets Ezra and Daniel. Few Israelis are conversant in Aramaic, and these are for the most part ultra-Orthodox graduates of rabbinical colleges, Yemenite Jews or Jews from Kurdistan, who'd spoken the language in their countries of origin.

However, Aramaic is not only a part of Jewish history; it is also the language of prayer of the Maronite Christians. In recent years, its use among the Christian population in Israel has been spreading, in a large part thanks to Shady, an IT professional aged 37, who decided to go all the way with his ethnic affiliation.

Shady serves as chairman of the Aramaic Association in Israel and is considered the moving spirit of the association. He grew up in an Arabic-speaking environment, but unlike most Christians in Israel, who see themselves as a part of Arab civilization, he chose to emphasize his other ethnic identity.

“My ethnicity is Aramaean, I am a Maronite Christian and my religion is Christian,” he tells us. He speaks Arabic as a means of communication, no more.

You are living in an Arab village; your mother tongue is Arabic. Don’t you see yourself as a member of the great Arab nation?

“No. I am a part of the Aramaean people. We do not have a country, but we have a language and a history and a heritage.”

The Maronites speak the western dialect of modern Aramaic, whose pronunciation is unlike that of the eastern dialect of Aramaic, commonly spoken in Aram Naharayim (Mesopotamia). They have a unique writing system, developed over centuries, but which ripened into its present-day form in the 14th century. The Aramaeans have three TV stations across the world, broadcasting news as well as entertainment and sports programs via satellite. Two of these stations operate from Sweden. The third, which broadcasts in the eastern dialect of Aramaic, operates from the Kurdish region in Iraq.

Several years ago, Shady and his brother Amir established in their village an Aramaic language school that offers courses free of charge. Students in the lower school grades learn the language in church, usually on Fridays. They read, sing and write in Aramaic. There is also one class for adults. However, the Khalloul brothers did not think this is enough. They appealed to the Ministry of Education, asking for and receiving an allocation of teaching hours for Aramaean heritage in the schools in their village. Once they got it, they — with the assistance of Knesset Members Israel Hasson (Kadima) and Yariv Levin (Likud) — initiated a bill for the recognition of the Aramaean minority in Israel as a nation in itself, the way the Arabs, Circassians and Druze are recognized. The bill was submitted for a vote in the Ministerial Committee for Legislation during the tenure of the 18th Knesset, but was blocked by Minister of Culture and Sport Limor Livnat.

“We hope that, once approved, this bill will serve as ‘a Light unto the nations,’” Shady says. “That is, once you recognize us as an ethnic minority, the Arabs, too, will recognize us and realize that our people are not extinct. Both Arabic and Hebrew are derived from the Aramaic language. These are all Semitic languages. And their common origin brings the peoples speaking them closer together.”

More than 10 thousand Maronites are currently living in Israel. Two thousand of them are former South Lebanon Army (SLA) combatants and their family members who moved to Israel following the withdrawal of the Israel Defense Forces (IDF) from Lebanon in 2000. Shady Khalloul Risha himself is a descendant of a displaced family from Kafr Biram, a Christian village that was the center of the Maronite community in the Land of Israel under the British rule. In 1948 the IDF expelled the inhabitants of the village, along with their neighbors from the nearby village of Ikrit, exiling them to Lebanon. After a week, they were allowed to temporarily return to Jish. This provisional solution has been going on ever since. Five years later, the IDF demolished the village houses, leaving their residents nowhere to return to.

To this very day, the Israeli authorities refuse to respond favorably to the requests by the displaced inhabitants of Kafr Biram and their Ikrit neighbors to allow them to return home to their villages. In recent years, each summer, the youths of Jish organize a camp for the children of the Maronite community on the ruins of the village, on a site located between the old church, which has been preserved, and the ancient synagogue of Biram.

The Maronites are affiliated with the Maronite Aramaean Antioch church, based in Lebanon, whose spiritual leader is Maronite Archbishop Bechara al-Ra'i. However, although their spiritual center is in the "Land of the Cedars" (Lebanon), most of them are scattered around the world, across five continents.

“Lebanon was the only country in the world that the Maronites ever dreamed of turning into their ethnic homeland,” says Risha. “So far, the dream has slipped away, but there are still those among us who hope that the dream will come true.”

He pulls out a children's book written in Aramaic and reads stories to Aram. His house is full of Aramaic-language textbooks, holy books and various other publications sent from friends in Sweden. He shows us his Aramaic bookshelf and tells us of his vision.

“I aspire to establish a settlement in Biram, as a belated compensation for the expulsion. We had 12,000 dunams (3,000 acres) there, and on most of the area Israeli settlements were set up. We are asking for no more than 3,000 dunams (about 750 acres) of our village lands back. We will establish a new village there that will preserve our Aramaean heritage in the country. The way there are Arab, Circassian and Druze villages in Israel, one Aramaean village may also be established here.”

Jacky Hugi is the Arab affairs analyst of the Israeli army radio Galie-Zahal, a columnist for the Israeli business newspaper Globes and the former Arab Affairs correspondent for Israel's Maariv daily.