What Israel would look like if more students learned Arabic

Israel is situated in the heart of the Arab world, yet it fails to encourage the study of Arabic, except in a military context. 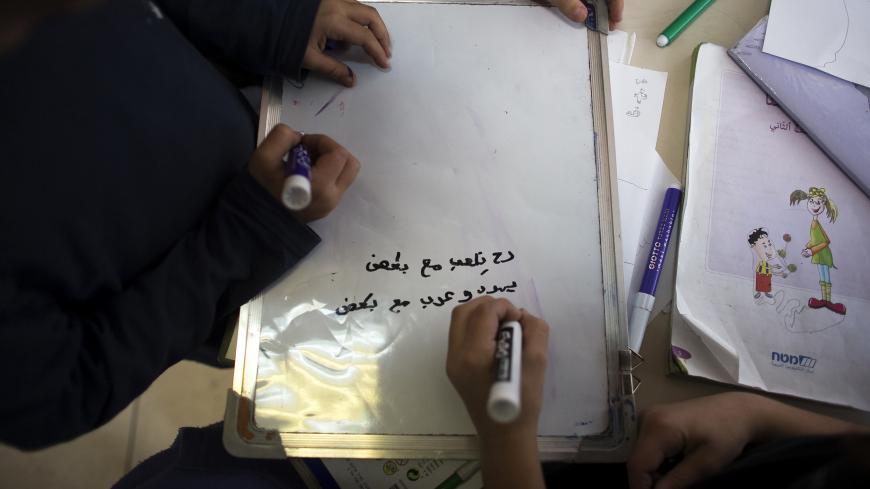 This statement was taken from a memorandum by the Director General of the Ministry of Education concerning Arabic-language instruction in Israel’s Jewish sector. It is dated It July 2018.

Instructors and soldiers serving in the Israel Defense Forces' Department for the Promotion of Middle Eastern Studies (Telem Department), which is part of the prestigious Unit 8200 of the Intelligence Corps, recently claimed that the department has ceased most of its activities, and that the entire department could be closed in the near future. The reasons given for this are a lack of budgetary resources and disagreements with the Ministry of Education.

The Telem Department was established after the 1973 Yom Kippur War as part of a decision by the army to encourage the study of Arabic in Israel. Over the years, soldiers from the Telem Department entered classrooms to teach the language, to promote the participation in the Gadna youth paramilitary program geared to Middle Eastern studies and to encourage students to take part in a special, nationwide quiz devoted to Islam, the Middle East and the Arabic language.

The IDF denied an Army Radio report that it is ceasing Telem Department activities, but the facts speak for themselves. The scope of the department’s activities decreased significantly over the last year. Apparently, the IDF has found other ways to teach Arabic, though Telem’s instructors have warned that the number of high school students taking 5 points of study in Arabic for their matriculation exams (the highest level) and who major in Middle Eastern studies could decline even further. According to Sikkuy - Association for the Advancement of Civic Equality, only 2,764 Jewish students studied Arabic in 2016 at the 5-point level for their matriculation exams.

So why does the State of Israel — a country situated in the heart of the Arab world where one out of every five citizens is an Arab — fail to encourage the study of Arabic, except in a military context? Yonatan Mendel, who researches the Arabic language at Ben Gurion University, told Al-Monitor that reducing Telem’s activities could actually bring about a change in attitude toward the study of Arabic.

“Anyone who links Arabic-language studies and the army forces learners to view the language from a militaristic perspective. Israel needs to think of ways to motivate people to learn the language since there is no real motivation at present," he said. "Israeli Arabs speak Hebrew, visiting the West Bank is [partly] forbidden, and it is almost impossible to visit Arab states. I believe that Israeli Arabs should play an important role in teaching Arabic.”

According to veterans of the Intelligence Corps and Unit 8200, linking the study of Arabic solely with Israel’s security needs is problematic. Col. (Res.) Alon Evyatar, a former intelligence officer and adviser on Arab affairs, places the onus on the government. “Israel only promoted the study of Arabic for use in the army and other official contexts,” he told Al-Monitor. “It was not part of the integral culture that belongs here. It was not intended to promote greater familiarity with the Arab population and society. Rather it was part of the negative indoctrination that was fostered here, based on the idea that we have to listen in on the Arabs in order to know what they are plotting.”

How unpopular is Arabic in Israel? It turns out that just 1.6% of Jews in the country studied Arabic in school. Only 26% of Israel’s adult population speaks Arabic, with the overwhelming majority of them Arab citizens. Only 0.5% of Jews in Israel are able to read a book in Arabic.

Students in Israel are only required to study Arabic in middle school, and then for just three hours per week. Schools in the religious nationalist education system barely learn Arabic at all, and the same is true in ultra-Orthodox schools.

Ze’ev Dgannie, the current principal of the Herzliya Hebrew Gymnasium in Tel Aviv, told Al-Monitor that there is a real shortage of Arabic-language teachers, and that the educational system denigrates the Arabic language. “The reason the government wants Arabic taught is for use in intelligence and that alone,” he said. “On the one hand there is no training for Arabic-language teachers, while on the other hand more and more veteran Arabic teachers are retiring. It is the subject with the greatest shortage of instructors.”

The Herzliya Hebrew Gymnasium, however, employs six Arab teachers, some of whom teach Arabic and others who teach other subjects. Nevertheless, Dgannie admits that his school is an exception.

Up until 2016, the “Ya Salaam” program initiated by the Abraham Foundation offered Arabic-language classes by Arab teachers in Israeli elementary schools. The problem was that the program was adopted by just 200 schools. While the Ministry of Education now offers a similar program, the number of participating schools has not increased.

There is a problem in academia, too. Professor Elie Podeh, former head of the Department of Islamic and Middle Eastern Studies at the Hebrew University, told Al-Monitor that he believes there is a connection between the “attitude toward peace” and interest in learning Arabic. “There has been a decline in the number of people studying the humanities overall,” he said. "This includes a noticeable decline in registration in several Middle Eastern Studies departments. Between 70 and 90 students register with the Department of Middle Eastern Studies at Hebrew University every year. It is quite possible that there would have been greater interest among students in the 1990s, when the mood in the country was different.”

In October 2015, the coalition and opposition agreed to pass the initial reading of a law that would have required Israeli students to learn both languages, Hebrew and Arabic, starting in the first grade. Since then, however, the law has been held up by the Knesset’s Education Committee.

Former Knesset member professor Yossi Yonah was one of the people behind the proposed legislation and a co-initiator of “Arabic-language Day in the Knesset.” He told Al-Monitor that the current unwillingness to embrace Arabic-language studies is a “serious mistake,” explaining that Arabic is the regional language and the language of many Jewish immigrants from Arab states. “What we have here is a lethal combination of stigmas and prejudices about the Middle East in general and an ongoing national struggle that involves the demonization of the other and dehumanization of the Arabs,” said Yonah, whose parents immigrated to Israel from Iraq and who speaks fluent Arabic.

“I’m afraid we could be moving backward,” he added, referring to the controversial Nationality Law, which passed in the Knesset in July 2018. “The law formalizes the existing systemic discrimination against the Arabic language and its speakers.

Is there hope? As it turns out, in recent years many Israelis are actually showing a growing interest in learning Arabic in frameworks other than the army or university. Language schools and social groups offer basic courses in spoken Arabic, as well as more specialized courses in Arabic for people in various professions. Nevertheless, it is hard to say that this will turn things around. It still looks like it will take deep-rooted changes in government policies toward the Arab minority and the status of the Arabic language in Israel, along with an increase in budgets, to encourage more Israelis to learn to speak Arabic — not so that they can learn about their enemies but in order to better know their neighbors.