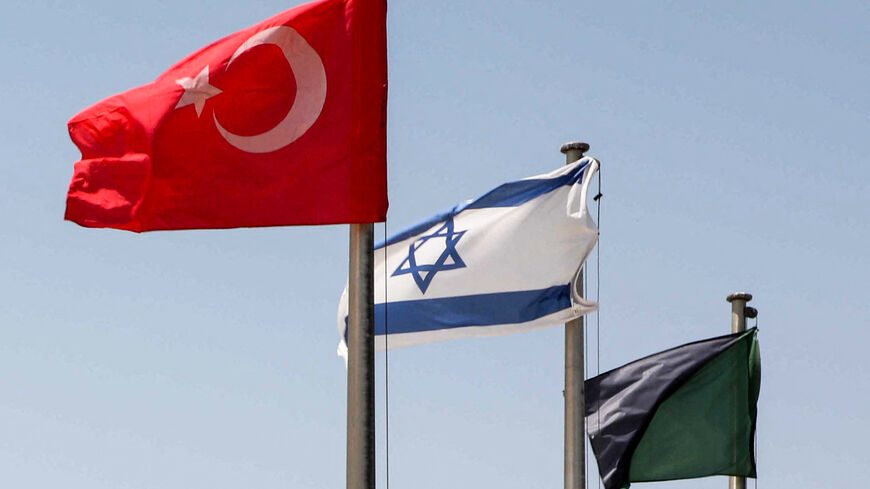 The flags of (L to R) Turkey, Israel and the Israeli army armored corps fly at the Yad La-Shiryon Tank Museum in Latrun, west of Jerusalem, on Aug. 18, 2022. - GIL COHEN-MAGEN/AFP via Getty Images

Before Turkish President Recep Tayyip Erdogan came to power some 20 years ago, Israel and Turkey were strategic allies. "In fact, the alliance with Turkey was the most important for Israel's national security other than the alliance with the US," a senior Israeli diplomatic official told Al-Monitor this week on condition of anonymity.

Relations between the countries were intimate, and more importantly, relations between the Israeli security establishment and the Turkish military were strong and based on deep cooperation and common interests. The two countries hosted each other's top brass. Israel was a major supplier of weapons and technology to Turkey, upgrading its tanks and assisting it with drone technology, while Turkey provided Israel with regional strategic support.

"These were the only two democracies in the Middle East," the source added, "and that is how they behaved. The IDF had an almost independent relationship with the Turkish army, which holds the role of 'defender of Turkey’s democracy', and it seemed that this arrangement would last forever."

Those days are gone. Erdogan severed this alliance almost in one fell swoop, conducted a purge at the senior levels of the Turkish army and took his country in an opposite direction, identifying with the Hamas movement in Gaza associated with his own Justice and Development Party. Relations deteriorated, ambassadors were recalled from both capitals and a chill settled over the Ankara-Jerusalem axis.

This week's announcement that the two sides were restoring full relations at the ambassadorial level completes a reconciliation process begun with the July 2021 inauguration of Israeli President Isaac Herzog. It will probably not restore the glory days, but it has changed the grim reality governing ties for over a decade. Israel and Turkey are not rekindling their love affair, but they have resumed their friendship. There will still be ups and downs, but almost everyone agrees that the Israeli-Turkish reconciliation is here for the foreseeable future.

Credit for these moves goes to Herzog, who received a surprising phone call from Erdogan soon after assuming office. Herzog, a veteran politician and experienced diplomat, must have immediately realized it was not a mere courtesy call congratulating him on his election.

Other indications followed. In November 2021, an Israeli couple visiting Turkey was arrested on suspicion of espionage. The accusation was clearly absurd and the two were released after Erdogan’s intervention at the request of Herzog, Foreign Minister Yair Lapid and then-Prime Minister Naftali Bennett. The incident was resolved before it turned into a full-blown crisis.

In March of this year, Herzog visited Ankara, where Erdogan laid out a kingly welcome, and Ankara announced that Cavusoglu would soon visit Israel, a first in 15 years. The Israeli Foreign Ministry cautiously took its time in confirming the news.

While Lapid backed Herzog’s moves, he remained reserved. Foreign Ministry officials, burned by similar overtures in the past, suggested Erdogan might once again be putting on a show for domestic political purposes or in order to cozy up to Washington. Lapid’s aides reportedly told him to sit tight and wait for Erdogan to prove he was serious.

Erdogan did so, and Lapid drew up a road map with clear milestones for improving relations with Ankara. The first was Herzog’s visit. “That was where we realized that not only did this process have Erdogan’s blessing, he was actually owning it. We understood this was real, but did not know how deep it went,” a senior Israeli diplomatic source told Al-Monitor on condition of anonymity.

That question was answered by two developments in late May: Cavusoglu's long-anticipated visit to Israel and what Israeli officials described as a mild Turkish response to the nationalist “Flag March” through Jerusalem’s Damascus Gate, a perennial trouble spot in Israeli-Palestinian relations. Cavusoglu’s visit led to the renewal of bilateral economic committees and an aviation agreement that Turkey had previously scrapped.

Soon followed by unprecedented cooperation between Israel’s Mossad and its Turkish counterpart in response to intelligence about Iranian assassins sent to Turkey to kill or kidnap Israeli tourists. That cooperation led to the arrests of some alleged Iranian agents and no Israelis were hurt. Mossad Director David Barnea expressed great satisfaction with the joint work with his agency’s Turkish counterparts.

In June of this year, Lapid made a successful visit to Ankara. Few noticed that in addition to his meetings with diplomats and politicians, Lapid also met with the head of Turkish intelligence, Hakan Fidan. Soon the aviation agreement was signed by both sides. Israel was also relieved by Turkey's mild reaction to its Gaza offensive, with just a token condemnation by Erdogan.

Has Erdogan fallen in love with the Zionist state? "Of course not," another top Israeli diplomatic official told Al-Monitor on condition of anonymity. "Erdogan remains Erdogan. He is a proud Islamist and he will not change, but he has understood the balance of power in the region and has a clear interest in turning Israel from enemy to ally."

An Israeli security source summed it up on condition of anonymity: "Erdogan has reverted to his policy of reducing conflicts in all sectors. He is aware of Israel's power and influence. He is not blind and he aspires to make Turkey the center of gas marketing between the Middle East and Europe. Israel holds a key role in this respect and Erdogan has elections next year. He must show economic achievements and that road passes through Jerusalem."

The renewed Israeli-Turkish connection is met with enthusiasm on both sides. "Almost everything we need from them, we get," the security source told Al-Monitor in an apparent reference to the ouster of senior Hamas figures who operated from Istanbul and Ankara and to the growing security and intelligence cooperation between Ankara and Jerusalem.

Their shared interests were also clear in both countries reportedly having assisted Azerbaijan in its war against Armenia in 2020. "Erdogan has found himself too many times on the Israeli side when it comes to Turkey's regional interests, and it is no coincidence," the senior Israeli diplomatic source said. "He understood that he did not have to love us in order to have good relations with us that would benefit both sides."

Is this new relationship immune to disruption? Of course not. Erdogan could revert to his old familiar self with a regional flare-up or Muslim riots on the Temple Mount. But he seems to be enthusiastic for now.