An agreement sponsored by Egypt, Qatar and the United Nations includes a cease-fire by Islamic Jihad in exchange for Israel releasing two prominent Islamic Jihad leaders in the West Bank as soon as possible. 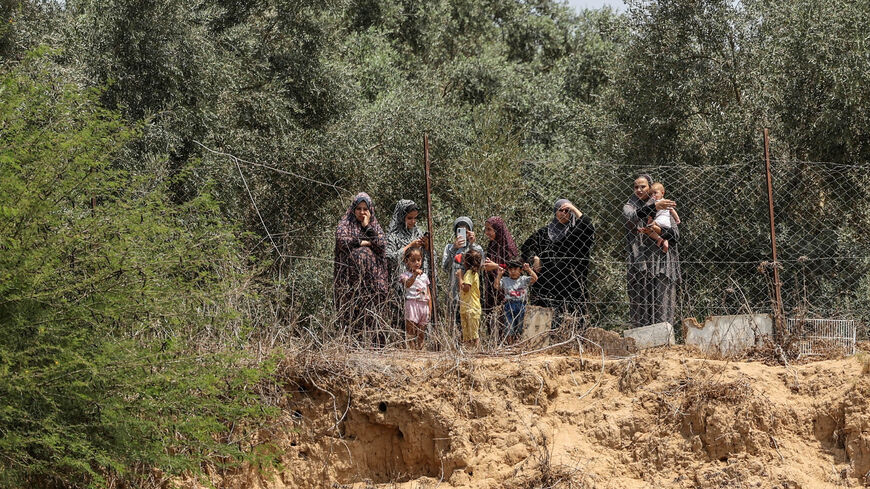 Palestinian women watch the funeral procession of members of the al-Nabahin family at al-Bureij refugee camp, after they were killed during the latest three-day conflict between Israel and Palestinian militants before a cease-fire, central Gaza strip, Aug. 8, 2022. - Mahmud Hams/AFP via Getty Images

GAZA CITY, Gaza Strip — The Islamic Jihad movement in the Gaza Strip announced on the night of Aug. 7 that it had reached a truce agreement with Israel under the auspices of Egypt, Qatar and the United Nations, ending a bloody round of fighting with Israel, the most severe one since the May 2021 war led by Hamas against Israel.

“If the enemy [Israel] does not abide by what we agreed on through the Egyptian mediator, we will resume fighting. We do not fear anyone,” Islamic Jihad Secretary-General Ziad al-Nakhala said during a press conference held Aug. 7 to discuss the details of the conditional truce agreement.

At exactly 11:17 p.m. local time Aug. 7, the Israeli Iron Dome defense system was still intercepting more rockets that were fired from the Gaza Strip toward Israeli targets in the Gaza envelope. And the calm did not last long after the truce entered into force at 11:30 p.m., as it was violated a few minutes later with a final burst of rockets.

After two days of intensive contact between all parties in Palestine and Israel, the Egyptian side succeeded in mediating a cease-fire agreement that would begin shortly before midnight on Aug. 7.

Under the agreement, Islamic Jihad demanded that Egypt makes efforts to release as soon as possible Khalil al-Awadeh who is on hunger strike in an Israeli prison and transfer him to a medical center for treatment, as well as its senior leader Bassam al-Saadi, who is also imprisoned at an Israeli jail.

On Aug. 5, Nakhala had announced through Al-Mayadeen channel that his movement launched an open military response against Israel in retaliation for the killing in the Gaza Strip on the same day of its leader Taysir al-Jabari, commander of the group’s northern district command.

However, the military operation led by Islamic Jihad against Israel prompted the latter to strike a large number of the group’s military sites inside Gaza to stop the launching of rockets, in addition to assassinating several other leaders, most notably Khaled Mansour, commander of the Islamic Jihad’s southern district command on Aug. 6, after targeting a house in the middle of a residential neighborhood in the city of Rafah in the southern Gaza Strip.

Hamas had previously supported Islamic Jihad through numerous press releases. Hamas’ military wing, Izz ad-Din al-Qassam Brigades, did not claim responsibility for any of the rockets fired during the last round of escalation.

At the press conference Aug. 7, Nakhala stated, “Hamas did not interfere in the battle, but it remains the backbone of the resistance, and we will preserve our unity.”

Although Islamic Jihad was the only resistance faction to launch rockets from the Gaza Strip during this round of confrontation, the quality, range and power of the rockets were completely different from those launched by Hamas in the May 2021 war.

Eyewitnesses told Al-Monitor that several rockets exploded locally before they were launched, and others landed inside residential neighborhoods in the Gaza Strip, causing many injuries.

One of those explosions took place in northern Gaza on Aug. 6, and another was documented during a live broadcast Aug. 7 of Al-Mayadeen TV from on top of Al-Ghifari Tower, west of Gaza City. Eyewitnesses told Al-Monitor that the rocket fell on top of a residential building, causing several injuries.

It is not the first time that human rights violations have been documented against Palestinian organizations in Gaza, as Human Rights Watch reported similar violations in May 2021.

According to a press statement by the Palestinian Ministry of Health, as of the evening of Aug. 7, the death toll during the last round of fighting stands at 44 Palestinians, including 15 children and four women, and 260 injured.

The Ministry of Health has also announced that the health system in the Gaza Strip would collapse within two days as a result of a severe shortage of fuel, equipment and basic medicines due to the closure of Gaza’s only commercial border crossing for nearly a week.

Mohammed Abu Salmiya, director of Gaza's Al-Shifa Hospital, told Al-Monitor, “As a result of the recent escalation there are people injured who need treatment outside the enclave. There are many other patients who were prevented from traveling about a week ago due to the closure of the crossings.”

He added, “We suffer from a severe shortage of medical supplies — about a 30% shortfall in medical devices and imaging equipment, and 40% in essential medicines. The available fuel is not enough to conduct all procedures and surgeries, so our work is currently limited to an emergency plan.”

Abu Salmiya pointed out that the main section of the hospital is under severe pressure since it is treating many serious coronavirus cases, premature babies and patients admitted for surgery, in addition to injuries resulting from the recent escalation.

Ahmed Abu Ramadan, 19, who was wounded in the first raid that targeted the Palestine residential tower during Jabari’s assassination, told Al-Monitor, “I will never forget what happened. We were peacefully hanging out when the walls of our home suddenly collapsed on us. All my family members were injured and they are all in the hospital now. It's a nightmare from which I haven't woken up yet.”