Iran nuclear deal: The devil remains in the details

The White House denies any concessions beyond the 2015 deal. 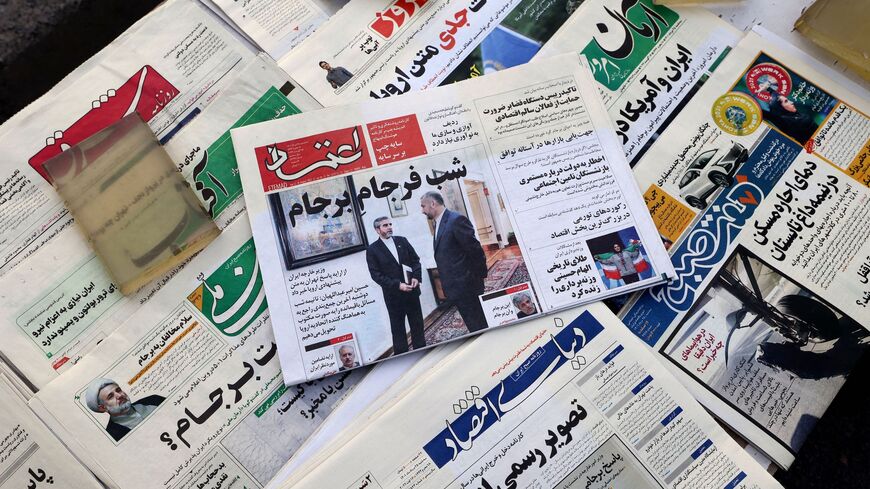 A picture shows a newspaper stall with a view of Etemad newspaper's front page bearing a title reading in Farsi "The night of the end of the JCPOA " and cover photos of Iran's Foreign Minister Hossein Amir-Abdollahian and his deputy and chief nuclear negotiator Ali Bagheri Kani, in Tehran on Aug. 16, 2022. - ATTA KENARE/AFP via Getty Images

The buzz is that the parties may be close to an agreement to revive the Joint Comprehensive Plan of Action (JCPOA).

So close that Israeli Prime Minister Yair Lapid sent a message to the White House to walk away from the negotiations and avoid concessions above and beyond the original 2015 agreement.

On Aug. 8, EU foreign policy chief Josep Borrell clarified that the 25-page draft had been delivered to the capitals involved for their decision on whether to accept it.

Borrell’s spokesperson, Peter Stano, made it clear that the text is final and, as he put it, it’s “the moment for a decision.” Stano added, “We expect all participants to take this decision very quickly … there is no more space for negotiations.”

At midnight Tehran time on Aug. 15, the Iranian government sent the European Union its response to what was described as the final text that was put together by the EU’s top negotiator, Enrique Mora, following the five-day round of talks in Vienna earlier this month.

Iran’s response to the latest proposal included several remarks that — if added to the EU’s document — mean there could well be another version of it, requiring more consultations for the United States and Iran in their capitals and later more deliberations among the parties involved.

Washington is apparently formulating its response to the Iranian remarks cautiously.

To clench a deal, the two sides must reach a balanced nuclear agreement that includes some face saving for  everyone on sensitive issues.

This is the major dilemma because the “devil is in the details” and any last-minute changes may complicate the expected agreement and extend negotiations until the outstanding issues are resolved.

According to Iranian sources speaking to Al-Monitor, the proposed deal would be implemented over a period of 120 days from the moment of agreeing on terms. The Iranian parliament will have to approve the deal within 60 days, then after another 60 days, the deal will be implemented.

Yet the verification process will start at the moment of approval. The United States will have then to revoke the sanctions, including some of the sanctions on the oil sector, on a case-by-case basis, and Iran will then be able to sell its oil and verify it’s able to get its money.

During the process, according to sources, US President Joe Biden would cancel three executive orders issued by former President Donald Trump on sanctions against Iran, and seven days before the implementation, both the United States and Iran will have to send an official letter to the European coordinator confirming their return to the agreement.

But what about the disputed issues?

The issue of the Islamic Revolutionary Guard Corps (IRGC) and its removal from the US Foreign Terrorist Organization (FTO) list has been moved beyond the agreement, and the process of lifting sanctions on Iranian companies would take place on a case-by-case basis, according to the Iranian source.

An Iranian source close to the Supreme National Security Council revealed to Al-Monitor that an understanding has been reached to discuss the IRGC issue after a deal is reached.

He added, “The IRGC [designation] will not be lifted. The Americans were ready to cancel these sanctions (and thus remove the IRGC from the FTO list) in return for steps from Iran, such as giving guarantees that Iran will not take action against people whom Iran accuses of being involved in the killing of [former IRGC commander] Qasem Soleimani.” However, the source noted, this would have contradicted Tehran’s “vow to avenge the blood” of Soleimani, and thus was opposed by the Iranian side.

A Thursday report from Iran International, a London-based Persian-language outlet, claimed Tehran had obtained a list of concessions from the United States — among them the removal of sanctions on 17 banks, the release of $7 billion in Iranian assets frozen in South Korea and the cancellation of several executive orders signed by Trump.

The White House denied the claims.

“Reports that we have accepted or are considering new concessions to Iran as part of reentering the 2015 nuclear deal are categorically false,” White House National Security Council spokeswoman Adrienne Watson said Thursday after the release of the Iran International report.

The same Iranian source spoke to Al-Monitor about the initiative taken by Iraqi Prime Minister Mustafa al-Kadhimi in March to help mediate between Iran and the United States on the IRGC issue. The source said that “at that particular stage, the United States was seeking to link the issue of removing the IRGC from the list of terrorist organizations” to a broader agreement for Iran to limit regional activity.

For Tehran, the give was not worth the take. And for Washington, even the thought of removing the IRGC from the FTO list would have required a great price in return. Thus it was a deal whose losses were much greater than its profits for both parties, so it was agreed to remove it from discussions, though it remained on the table.

For those who have closely followed the negotiations over the past several years and been in direct contact with the actors involved in them, it’s apparent the nuclear agreement is not a singular agreement but rather a set of deals under the umbrella of one deal.  Each item is negotiated as if it were the only item, then multiple items are grouped together and coordinated with each other as if part of a multicolored rosary. Some beads do not match with each other. The negotiators then exert additional effort on the complete text to try to harmonize it, hoping that what has been accomplished won’t be for naught.

Among what was accomplished was a settlement covering the guarantees gap that remained without a solution.

To work around Iran’s concerns about the absence of a US "guarantee" to stay in the Iran deal beyond the Biden administration, Iran’s Supreme National Security Council secretary, Ali Shamkhani, tweeted that the provision in the 2015 agreement that allows the housing of disabled centrifuges in an IAEA-supervised warehouse was an “inherent guarantee,” adding that it’s “more effective” than any political assurances.

“The idea of keeping the advanced centrifuges in a warehouse, thereby giving Iran an ability to ramp up quickly if the US were to pull out again is what's known as an 'inherent guarantee,'" said Mark Fitzpatrick of the International Institute for Strategic Studies. “It's one reason that the break-out time cannot be brought back to the JCPOA standard of 12 months. Another factor making a 12-month break-out period impossible is the knowledge Iran has gained over the past three years.”

Among the serious proposals currently circulating is the idea of giving a grace period for sanctions violations of between two and a half and three years for companies doing business with Iran in the event that the United States leaves the agreement in the future. The item is present in one of the papers circulating among the negotiators, but it is not yet certain whether Washington will accept it.

There is also the matter of the IAEA investigation into past nuclear weapons research, one of the stickiest points in the negotiations..

"My understanding is that if Iran gives credible answers concerning the whereabouts and disposition of the previously unreported uranium and associate equipment, then this would be sufficient for the IAEA to close the safeguards file, even if all questions about the past development work are not fully put to rest," Fitzpatrick told Al-Monitor. .

According to multiple sources in Tehran, Washington and Brussels, the revival of the nuclear agreement will open the door to negotiations on other outstanding issues besides the IRGC one, such as a potential prisoner swap.