Restoring Iran deal may see trade-off between past, present knowledge

Sticking points to kickstarting the Iran nuclear deal include Iran’s "demand that the IAEA end its investigation of uranium particles found at three sites in 2019." 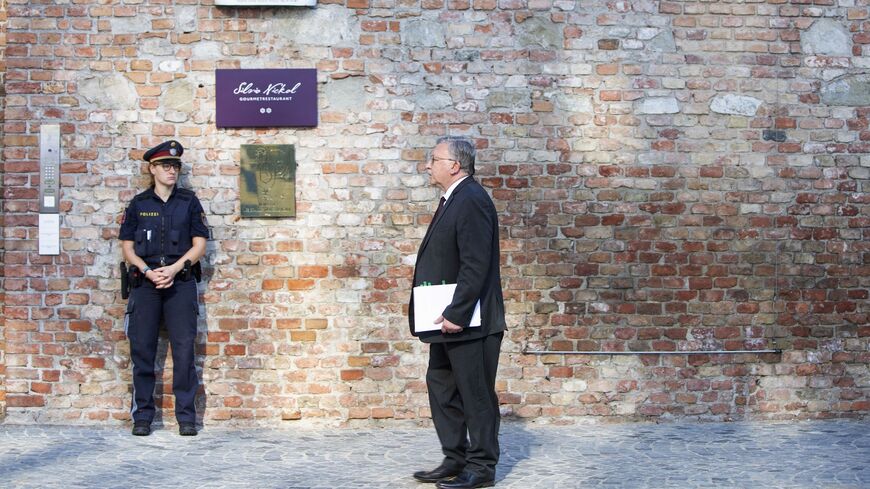 Russia's governor to the International Atomic Energy Agency (IAEA), Mikhail Ulyanov, arrives at the Coburg Palais, the venue of the Joint Comprehensive Plan of Action meeting aimed at reviving the Iran nuclear deal, in Vienna on Aug. 4, 2022. - ALEX HALADA/AFP via Getty Images

After months of deadlock and near death, the Iran nuclear deal has a new chance for revival. On Aug. 8, the European Union, which for the past 16 months has been acting as a broker between Iran and the United States in talks to restore the accord, presented what it called a final text of a compromise package that it hopes meets all parties’ bottom lines.

The EU text would require compromises for both main antagonists. Such is the nature of a negotiation, as was the case with the 2015 deal (which Al-Monitor noted in this week's Takeaway) known as the Joint Comprehensive Plan of Action (JCPOA). Removing what has been seen as the key impediment to negotiations, Iran apparently has accepted that the Islamic Revolutionary Guard Corps (IRGC) will not be removed from the US Foreign Terrorist Organization list, instead agreeing to postpone this issue for a later discussion. Charges filed on Aug. 10 against an IRGC member for a plot to assassinate former national security adviser John Bolton underscored why President Joe Biden could show no leniency toward the group.

Iran also seems to have muted its demand for guarantees that the United States would not again withdraw from the accord, as former President Donald Trump did in April 2018 without cause. Since the JCPOA is a political understanding, not a treaty that would require an impossible confirmation vote by a divided US Senate, there is no basis for a legal guarantee. In any case, Iran has an implicit guarantee in the form of its own leverage: If the United States were to again withdraw from the deal, Iran could again quickly ramp up uranium enrichment.

The remaining sticking point concerns Iran’s demand that the International Atomic Energy Agency (IAEA) end its investigation of uranium particles that the agency found at three sites in 2019. As reported by The Wall Street Journal, the EU’s latest text offers assurance that if Iran answers the IAEA’s questions “with a view to clarifying them,” the United States and other parties to the agreement would urge the IAEA to close its investigation. This clause is probably what Mohammad Marandi, an adviser to the Iranian negotiating team, meant when he told Al-Monitor that Iran had won key concessions.

The loophole language “with a view to clarifying” implies that full clarification may not be forthcoming. Indeed, it is extremely unlikely that Iran would ever admit that the undeclared uranium particles were related to past nuclear weapons work. The United States and its partners, as well as the IAEA, know this. They also understand it would be pointless to forego the possible revival of the nuclear deal just because Iran will not confess to what is well known to have been the case.

As much as the IAEA would like to have a complete picture of how the uranium particles in question got there, the more important issue concerns the current whereabouts of the uranium and any associated equipment. This is the issue that cuts to the heart of the IAEA’s safeguards responsibility: to confirm that all nuclear material and activity in Iran is not being diverted for military use. If Iran can prove that the previously unreported uranium is now under IAEA safeguards, then the agency’s core mission will be fulfilled.

Assuring the peaceful purpose of current and future nuclear activity in Iran was a central thesis of the 2015 deal. Back then, the IAEA agreement to close its investigation of past nuclear activity of a “possible military dimension” (PMD) was an Iranian condition for JCPOA implementation.  Even though Iran’s answers about past activity were insufficient, a political judgment was made to close the file since the IAEA and Western intelligence agencies in any case had a good picture of those past activities.

A difference between the PMD issue and today’s IAEA investigation into the uranium particles is that the latter concerns the IAEA's core role of safeguarding nuclear material. Whatever it decides to do about probing the past, it cannot forego knowing where the uranium is now.

It is possible that the uranium in question subsequently found its way into stockpiles that are currently under IAEA watch. If so, Iran should be able to provide the answers that would allow JCPOA restoration. If the material is not currently being safeguarded, then Iran is likely to continue to obfuscate and stall. It may, in any case, revive previous demands about assurances over sanctions removal and other matters. It should be possible, however, for Iran to come clean about the uranium’s current whereabouts without confessing to past violations.

Those in the West who have always been critical of the JCPOA will howl at the suggestion that Iran’s past violations can be overlooked. They themselves, however, overlook the consequences of their condemnation of the 2015 deal. By reneging on it, Trump goaded Iran into discarding the limits on uranium enrichment, to the point that the “breakout” time is below the margin of error for timely detection. Within a couple of weeks, Iran could produce enough highly enriched uranium for a nuclear bomb. To be able to restore a timely detection period, the United States will inevitably have to pay a penalty for Trump’s withdrawal.

Regional and global security will be best served if Iran returns to JCPOA enrichment limits and transparency. While in an alternative universe one might prefer that Iran had no nuclear material at all, IAEA confirmation that all nuclear material Iran does have is in peaceful use is worth accepting the compromise in the EU final text.